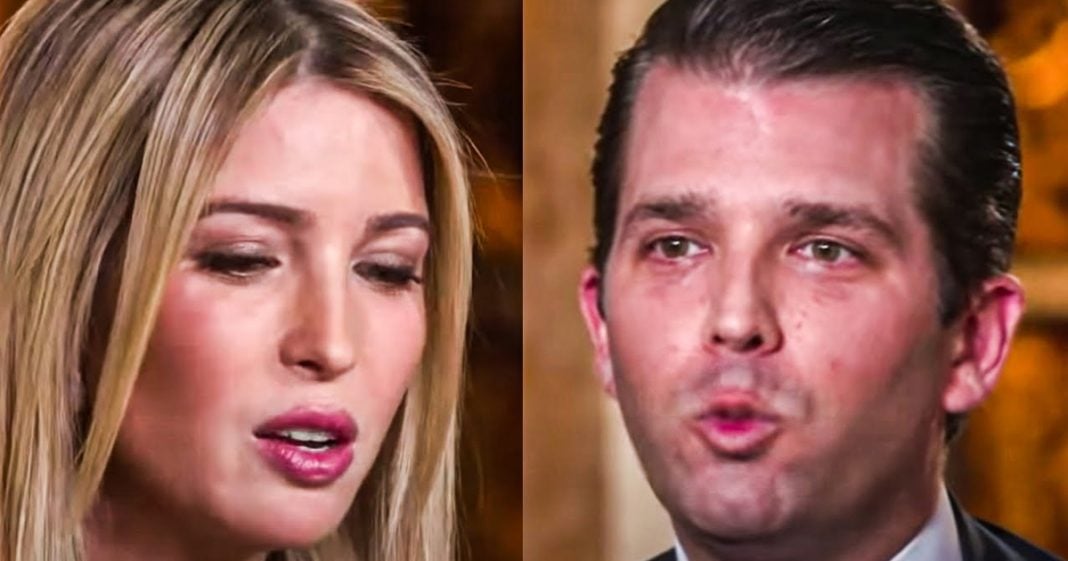 According to conservative columnist Jennifer Rubin, Donald Trump has ruined his kids’ chances of ever being President. The reason she gives is that Donald has turned off Republican donors and they won’t be willing to donate to a Trump kid in the future. The problem with her hypothesis is that there is literally ZERO data to back it up, as Ring of Fire’s Farron Cousins explains.

In a column this week, a conservative writer, Jennifer Rubin for the Washington post said that Donald Trump has likely destroyed his children’s chances of ever running for political office. At least anytime within probably the next decade. The reason that Rubin gives for this is that conservative donors are going to be a little reluctant to want to fund another Trump presidency considering how disastrous this particular administration has been to that. I say that Jennifer Rubin is living in a complete and total fantasy land. She, Jennifer, you’re a conservative. And I know you notice. And honestly, sometimes I feel like you’re playing the role of double agent, you know, pretending to be a never Trump Republican, but then coming out with these absolutely horrendous takes that actually only serve to help Donald Trump. Like you’re, you’re totally in double agent territory here, but let’s examine your new claim that wealthy Republican donors want nothing to do with future Trump’s.

Well, here’s the thing. We do know that yes, as of right now, Republicans are having trouble raising money for their second convention. They had no problem raising money for the first part of the convention in North Carolina. It was only when Trump added the second part, that’s going to cost tens of millions of dollars that wealthy Republicans decided to say, Hey, we already gave our money, right? I’m not going to be tapped out for this kind of convention, right? That’s a silly thing to spend all my money on, but when it comes to giving money to other Republicans and actually doing quite well, even though we’re in the middle of a pandemic, wealthy Republicans and major corporate donors, totally doing fine, totally doing fine, Jennifer. And I know that, you know that, I know you know that because that’s not a hidden fact. They have not closed off the financial spigots to any of these bigots.

It’s still happening right now as we speak. And you know, it, you are being intentionally disingenuous. Why, why for clicks? Because you think it’s good for business. That has to be what is going on with Jennifer Rubin right now, Donald Trump may have in fact actually yes, destroy his children’s possibility of ever running for office. I don’t doubt that fact. I just doubt it’s happening for the reasons that Jennifer Rubin says there is always going to be corporate money to be had by the Republicans. That is effect. That is a given. That is as certain as the sun will rise tomorrow, wealthy corporations and their CEOs will give money to Republican politicians, no matter what their last name is, their name could be Bush. It could be Trump help. It could be Clinton. Corporations are going to give them there money to politicians. Even if they’re toxic, Ted Cruz is pretty toxic.

He can still pull in corporate money. Same thing with Matt Gaetz, Jim Jordan, Devin Nunez, Lindsay Graham need. I go on hell. Even Susan Collins who doesn’t know where she stands at any given moment on any given issue, still able to raise money. Yeah. So what are you talking about? Jennifer Rubin, your talking nonsense, and the reason you come up with these sensationalist headlines is because it generates clicks. And I hope that anybody who goes through and reads the garbage that you’re putting out there in the Washington post all the time, I hope they see it for what it is. It’s trash. It’s not based in reality because, because we can, we can go to websites like open secrets. Uh, we can go to good map light. We can see where the corporate money is going in real time, by the way, and guess what? Still flowing to Trump. And if one of his kids runs for office, it’ll flow to them too.