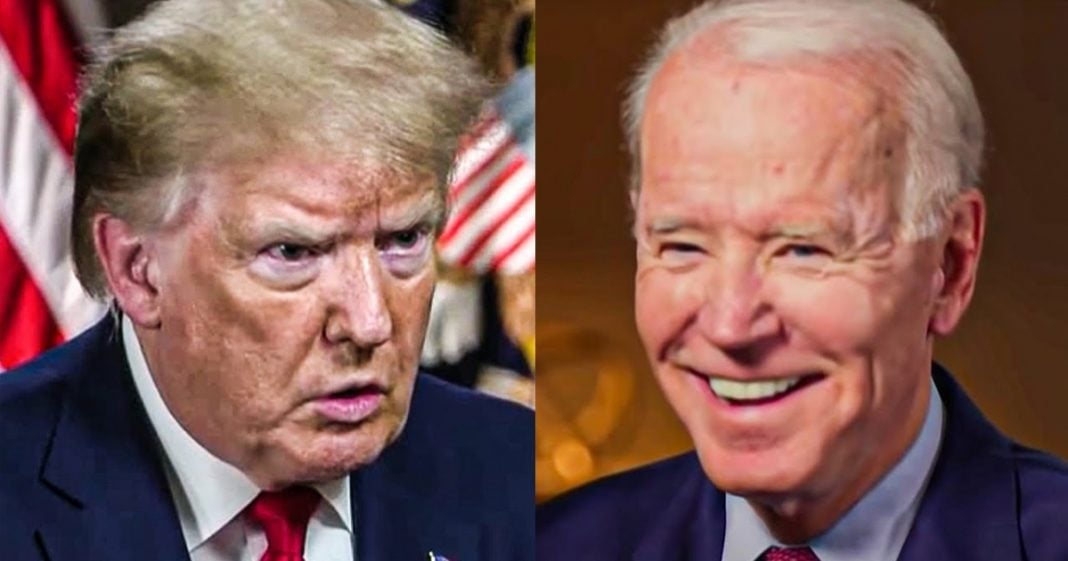 Forget about swing states – according to the latest round of polling, Donald Trump isn’t even beating Joe Biden in Red States across the country. This generation has never seen a Republican perform so poorly at this point in an election cycle, and right now there doesn’t appear to be anything on the horizon that could change the polling situation. Trump is in trouble, and if he can’t even pull out a victory in some of the reddest states in the country then he has a 0% chance of winning in November. Ring of Fire’s Farron Cousins discusses this.

There’s been plenty of polling in the last month or so showing that Donald Trump isn’t meeting Joe Biden in any swing state in the country, as of right now. Um, but there’s a bigger problem that the president has in the 2020 race. It’s not just that he’s losing the swing States. Now at this point, the man is losing according to the latest polling red States. Now here’s the thing about that. Those of us who follow presidential elections very closely, and I’ve done it for many years, you know that you typically don’t have to worry about your red States and your blue States, right? Your blue States are going blow. Your red States are going red. That’s why they’re labeled as such and not called swing States, California, New York, solid blue, Texas, solid red. Those are givens in electoral politics, except they’re not this year. Texas has a chance, a small chance to actually turn blue for this election cycle.

The latest polling shows the Joe Biden is now up. He’s up by one point, but he is beating Donald Trump in the solid red state of Texas. If that’s not good. Good enough for ya. How about we take a look at Georgia, also solid red state in the deep South. And trust me, Georgia South is a lot different than Texas South folks. I really cannot stress that enough. You know, I live down here, you know, not, not far from Georgia, the Florida Georgia line. Um, yeah, pretty close, pretty, pretty close. And that’s not the same kind of red that Texas is. Trust me. So what’s happening over in Georgia. What what’s happening over in Georgia is that Trump has narrowed his lead. He is gone to beating Joe Biden by only three points, which has actually well within the margin of error for the state. So Georgia is now a statistical tie between Donald Trump and Joe Biden.

What if we leave the South? Right? What are, what are we going to Midwest? What do we look at? Like Montana, right? Montana’s a red state Trump beat Hillary Clinton by 20 points in Montana. Surely Joe Biden. Can’t be catching on Trump there, right? One fortunately for Trump. Yes. Yes he is. Actually, Trump has only beating Joe Biden by five points in Montana. He is only beating Joe Biden by five points in Kansas. Another state that he beat Hillary Clinton by 20 points in. So those massive margins that Trump had in 2016, over Hillary Clinton in these red States, they have the gap closing and Joe Biden is closing it now, ever since what? February, March, right? We’ve been talking about these poles ever since it was clear that everybody had coalesced around Biden and he was going to be the nominee. Uh, they’ve showed Joe Biden winning first by very narrow margins.

Actually at one point he wasn’t winning and then he was, and it was tight. And then he wasn’t and he was, you know, they’ve just gotten bigger and bigger. And every time we talked about these polls, I always point out that, Hey, it’s important to remember the election, you know, back then, like it’s nine months away. Anything can happen. It’s seven months away, six months away. It’s four months away and actually three and a half months away. Um, still anything could happen, but a likelihood at this point of anything happening in Trump’s favor, getting smaller literally by the day clock is ticking and it’s running out and Trump’s not looking so good. Now I know conventional wisdom for the left says, Hey, let’s not get complacent with these polls. And that is true. Let’s act like we’re 20 points behind. Yes. That is also true.

But there is one thing on the horizon that actually could flip these polls in Trump’s favor. And that is the debates that’s going to be rough. That is absolutely the one thing left that could flip things in favor of Trump and against Joe Biden. Joe Biden’s benefiting right now because he doesn’t have to go out and do things. Cause he can’t really go out and do things. And not just because of the pandemic, but because of who he is, he’s not good at speaking publicly and not saying crazy things. So the more he gets to hide the better off he does, you can’t hide during a debate and Trump’s going to come to that debate and just throw all kinds of wild crap at Joe Biden. He is going to sit there, make things up and force Joe Biden to defend, or basically tin negate, this alternate reality that it’s going to be impossible to do.

It’s a horrible debate tactic on behalf of Trump, you’d get disqualified from an actual debate, uh, you know, in high school or college, but that’s how Trump debates, cause he’s not a debater. He just wants to accuse Biden of all kinds of things. Biden’s gonna be on the defensive trying to say, wait, what the hell did I actually do that? Maybe? I don’t know, bro, it’s going to be bad. Biden’s best hope right now. Like if they cancel the debates, Joe, Biden’s the next president of the next, uh, United States like a hundred percent. But as long as those debates are still on, there still exists. The possibility of Donald Trump turning around these horrendous poll numbers.