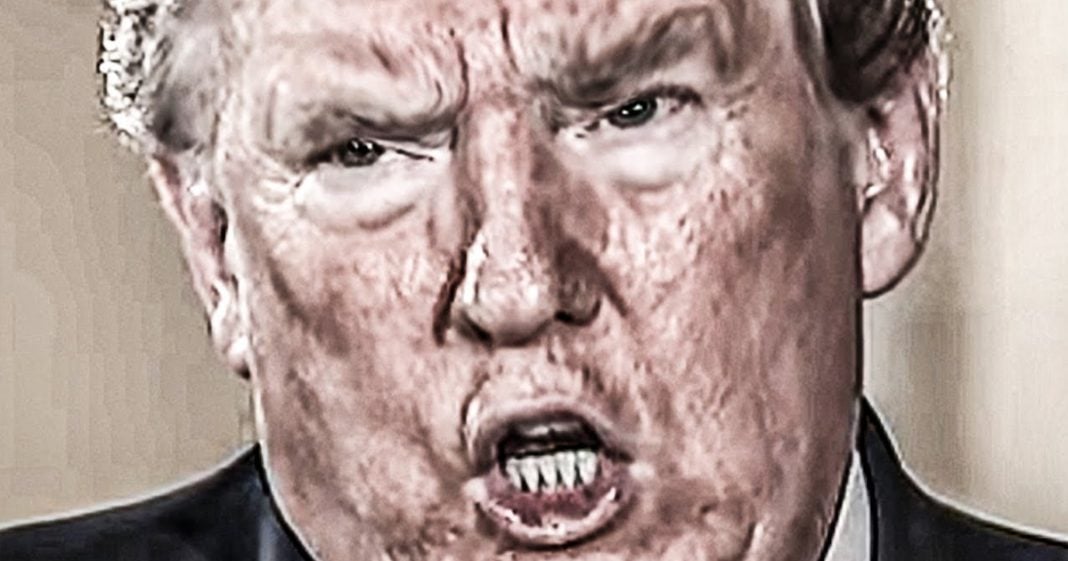 Republicans love to tell us that they need to protect themselves against a tyrannical government, but when the tyrannical government actually presents itself they greet it with open arms. Why? Because it is currently only a problem for the people that they hate. In Portland, the Department of Homeland Security is sending out their thugs to snatch people off the streets and whisk them away in unmarked vans. America has disappeared, and the Republicans couldn’t be happier, as Ring of Fire’s Farron Cousins explains.

So late last week, the a bombshell story dropped about the department of Homeland security sending in their, uh, on marked thugs to the city of Portland, to disappear people from the streets. These were soldiers, I guess, from the department of Homeland security, somehow that were sent to Portland, they did not have proper badges, uh, that did not, by the way, a list, what department they were with. They did not have name tags, no real identifying markers on these people anywhere to be able to determine what branch of the government they were with, uh, which law enforcement office they were with. They were in cammo fatigues with little badges that said law enforcement or police or whatever, but didn’t specifically list any kind of precinct city, none of that, which is actually something that is required. And again, no name tag. So you couldn’t see who these people were because according to the Homeland security, they were tired of their people being doxed.

So they didn’t want them to be, uh, labeled the grabbing protesters off the streets, shoving them into unmarked vans, regular old rental vans that they got from just a rental car place, driving them away. And we don’t exactly know where we’re hoping police stations and not somewhere worse than that. But here’s the thing. This whole thing, reeks of fascism. That’s what’s going on here. The federal government has essentially occupied a United States city. Now the government of Oregon does not want the military does not want Donald Trump’s jackbooted thugs in the city of Portland. They want them out. They want them gone. Trump. Meanwhile is telling the, uh, government of the state y’all, aren’t doing a good enough job. So I’m coming in and I’m doing this against your wishes.

I’m disappearing US citizens essentially of this. Again, this is fascism. And the fact that we have right-wingers in the country right now, celebrating what’s happening. That leaves little doubt as to how atrocities across the planet throughout human history can happen with the public support. Over the weekend, you had Fox news, you had conservative columnists and you had morons on Twitter celebrating the fact that unmarked federal agents were swooping into a city here in the United States and snatching up citizens because they were allegedly rioting. We we’ve seen footage. We have seen footage of peaceful protest are sitting there, standing there doing nothing. And these thugs come up and start beating them with their batons. The, this is not a response to rioters. This is a political response from the president of the United States meant to silence his critics.

And Republicans are cheering it over the weekend on Fox. You had people like John, you, the author of the torture memos from the Bush administration. You had plenty of hosts on Fox news. You had Andy know the agitator who claims he’s out there, you know, covering Antifa cause nobody else will claim to got brain damage from getting hit in the head with the milkshake. He was out there celebrating this, celebrating the rise of fascism here in the United States, because that’s what we’re seeing in the city of Portland. This is terrifying what the federal government is doing as far worse than anything. Those protesters or even rioters or looters could do, because at least they, the protestors are operating within their constitutional rights. The federal government is not Donald. Trump has been asked to pull his troops out of the state of Oregon. And he is refusing folks.

This is bad. This is how fascism comes to America. And it’s nice to see that the Republicans who claim left and right that, Oh, I have to have a gun to protect myself against a tyrannical government. Yeah. Well, when the tyrannical government actually shows up at their doorstep, they’re not fighting them off with those AR fifteens. Like they said, they would instead they’re welcoming them with open arms. Why? Because they’re targeting their political enemies. How does that old saying go right first they came for the trade unionists and I didn’t speak up cause I wasn’t a trade unionist. Yeah. Republicans keep that in mind. Cause I guarantee you, if this doesn’t end, it’s going to end the same way that old saying dead. There’ll be nobody left to speak up for you.