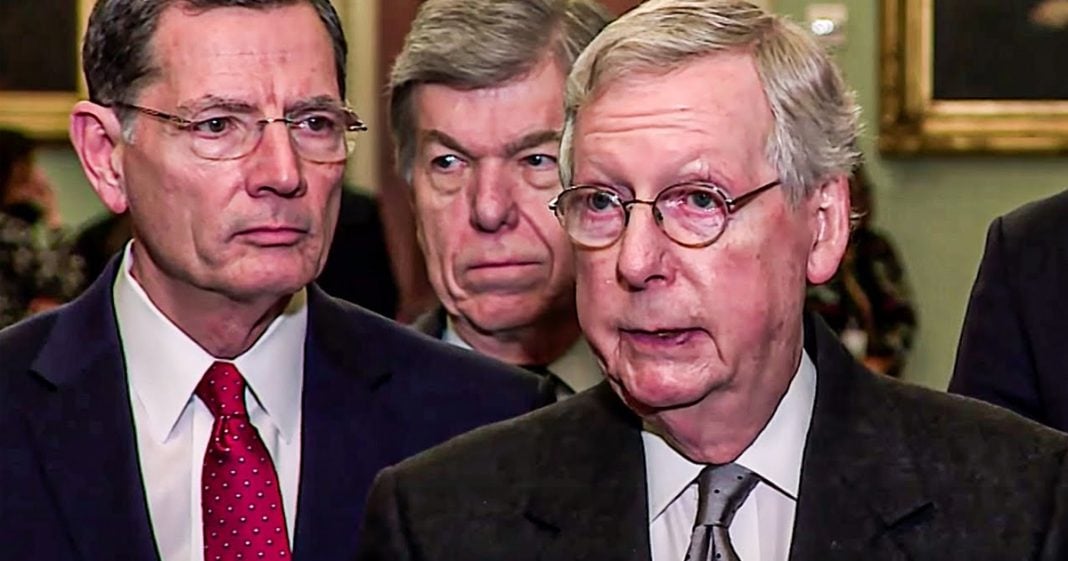 Republican strategists and consultants aren’t being shy about telling the media exactly what is happening behind the scenes in the Republican Party, and the picture that they are painting isn’t one that the Party should be proud of. According to reports, Republicans up for reelection this year are increasingly getting fed up with Trump’s behavior, and they want to stay as far away from the President as possible, even if that means skipping the RNC convention this year. Ring of Fire’s Farron Cousins explains what’s happening.

More and more stories continuously are coming out about how Republicans specifically those running for reelection this year are getting fed up with Donald Trump. They don’t want anything to do with them. They would love if possible to distance themselves from Donald Trump, both literally, and of course metaphorically. But unfortunately, according to Republican strategists and consultants in recent interviews, that’s just not possible for these Republicans. They want a way out. They want a way to say, we’re not like him. We don’t necessarily stand with him. We do not certainly agree with the things he has been saying and doing recently. But, but we’re a little confused about how to do that. One of the things that we have seen recently is that Republicans are starting to say, yeah, we’re not going to go to this convention thing that you’re having, you know, the big four year convention. Uh, it’s really important.

It’s a big event, but yeah, we’re just not going to go to it. And a couple of them like a Republican Senator, Chuck Grassley have said, Hey, it’s because we’re in the middle of a pandemic. This is not a good idea. I’m high risk. I go in, then you have others like Mitt Romney, Collins, and Murkowski who say that I just can’t stand the way Trump is. So you can count me out of your little convention in Jacksonville. And in North Carolina, I’m not going to be at either of them. And according to the Republican consultants who recently spoke to USA today, we can expect many more Republicans to do the same thing. That’s what we’re looking at right now with the Republican party. Now here’s the thing. There’s plenty of Republicans out there who are still willing to stand with Donald Trump. Uh, Lindsey Graham is a great example.

He is a guy who was actually up for reelection, not doing well in his race though. Uh, getting out raised by his democratic opponent, um, who stands by the president relentlessly, you know, when Donald Trump had his meltdown the other day, about how fast he plays golf, but the media doesn’t give him credit for that Lindsey Graham chimed in and said, yeah, he’s like the fastest golfer ever. Um, he does tons of business on the golf course. Uh, he’s just the greatest guy ever made, but others notably silent, right? We are seeing more and more Republicans simply not saying a thing about Donald Trump, at least not the ones who were up for reelection. You have your obvious hacks that you see on social media, right? You know, your, your right wing celebrities, your right wing grifters, like your Candice Owens, you Charlie Kirks and Dave Rubin’s and Dave, and you’re Tim pools at this point, those folks, yeah.

They’re going to go out there and they’re going to defend the president. They’re going to stand by anything. He says, uh, less out of loyalty to him. I think more out of just hatred towards a, the left, but nevertheless, they’re going to stand by him, but they don’t matter. And I know that probably hurts their feelings to hear, but believe it or not folks, y’all, don’t matter at all in the world of electoral politics for Republican politicians, you do a good job of helping to push policies. But at the end of the day, you have no input whatsoever on the decision making on who gets to run what race. And you really don’t have much effect on the outcome of any of those races either. Sorry, but that’s the sad reality that we all live in. But the politicians themselves, where are they? Where are those voices out there defending the president saying that he made the right choice here. He made the right choice there. He’s doing things that we like. We stand by his decision in the early days of these protests, we saw those, but those are kind of shut up a little bit. Haven’t they, they kind of did it disappeared after about a month. And they’ve been gone for about a month at this point.