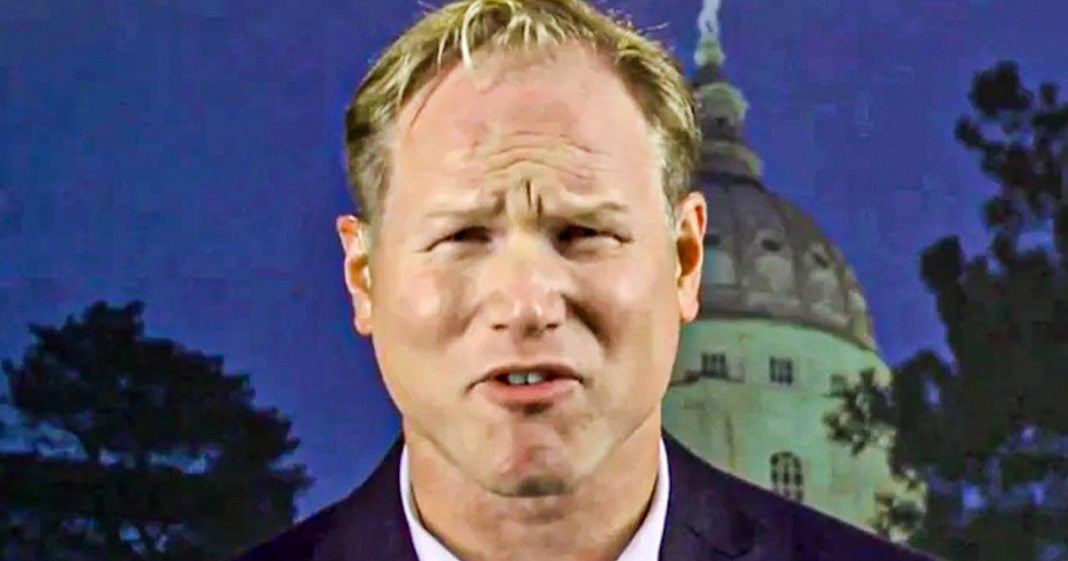 Republican Congressman Steve Watkins has been hit with 3 felony charges of voter fraud after being accused of using a fake address to register to vote. Watkins serves in the U.S. House of Representatives, representing a district in Kansas, but he has repeatedly tried to claim residency in Alaska in order to get the UBI that the state doles out. His voter registration listed his address as a UPS store, which is not valid and that sparked the investigation. Ring of Fire’s Farron Cousins discusses this.

Well folks, another day, another Republican who got caught committing voter fraud, you know, this seems to be a little bit more common than previously it thought, right? Because we’ve seen instance after instance, after instance in the last couple of years of Republicans getting busted, committing voter fraud, we actually talked about one just the other day. A mail carrier in West Virginia was found changing people’s voter registrations from Democrat to Republican. Well, now we got another one and this one, isn’t just your average everyday run of the mill Republican. No, this was a lawmaker in Washington, D C representing the great state of Kansas. This is U S representative. Steve Watkins and Watkins has been hit with three felony charges and one misdemeanor charge, which are providing false information to law enforcement voting without being qualified and unlawful advanced voting. The misdemeanor charge is account of failing to notify the Kansas department of motor vehicles of a change of address Republican lawmaker, serving in the house of representatives, committed voter fraud, according to the attorney general in Kansas, that that’s where the charges came from.

And here’s the reason they say that he has committed voter fraud. He has listed his address as a ups store and Kansas that’s where he lives. Allegedly. His other address is in Alaska. You know, I can see, I guess, how people would get confused about that. Right. You know, my in Kansas, am I in Alaska? Who knows they’re both. So dang similar, right? Similar climates, similar topography and all of that. Right. Well, it turns out that mr. Watkins likes to claim that he has an address in Alaska, uh, because four 11 times in a row, he has applied for the Alaska permanent fund, which is the stipend that all residents of Alaska get. And mr. Watkins loves free money. So he’s claiming, Hey, I live in Alaska cause he did, by the way, he did live in Alaska when he was serving in the military.

And we know that because one of the women who was on the base where he was stationed as well, um, accused him of a sexual harassment. So there’s also that and mr. Watkins past, yeah, this guy has not been serving in the house of representatives for very long whatsoever, but he has already made a name for himself as one of the biggest scumbags in Washington, D C cause in addition to now facing three felony charges and one misdemeanor for his illegal voting, he also has, I mentioned he has the accusations of misconduct and of course he got busted editing his own Wikipedia page, trying to remove unflattering information like the sexual misconduct allegations, six different times, hot caught editing his own Wikipedia page.

This dude is off. I mean, not only is he awful in the things that he does, but he’s also very bad at doing them because he always seems to get caught. If you continuously get caught doing bad things, then maybe doing bad things. Isn’t for you kind of like Republicans with voter fraud. Right. We have seen now six different instances since 2016 of Republicans committing in person voter fraud. Yeah. And zero for Democrats, zero zero, zero, but six Republicans did it, you know, maybe that’s why Republicans like to tell us that voter fraud is so widespread. Maybe they think it’s so widespread because they’re all committing voter fraud. So either Democrats are just really good at it and not getting caught or they’re not stupid enough compared to publicans to commit all this voter fraud.