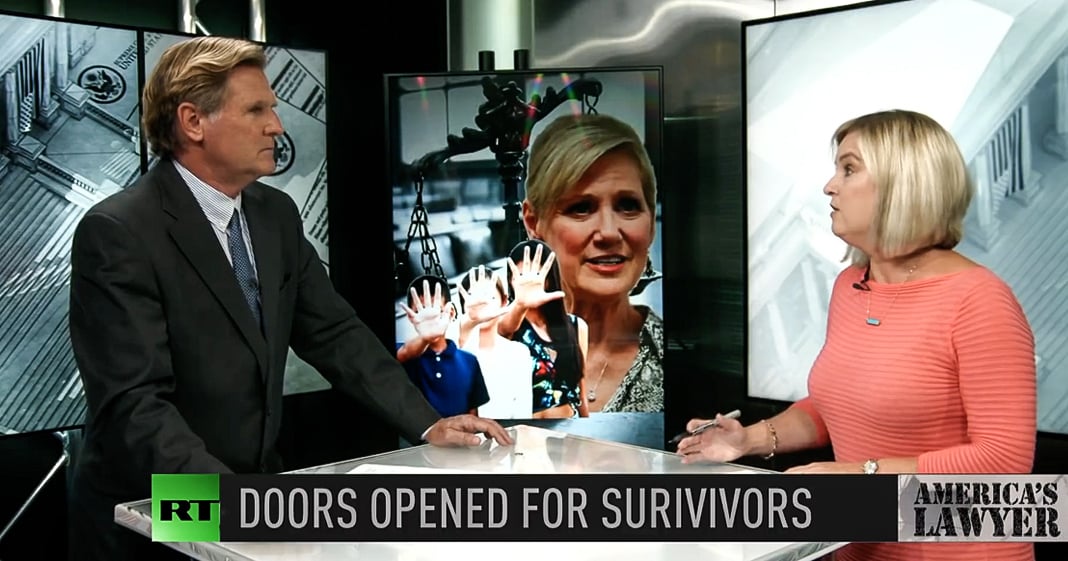 Mike Papantonio: One of the few unanimous decisions by the House and Senate in recent passage of Donna’s law here in Florida, it’s going to seek justice for survivors of child sex abuse for years to come. Legal journalist Mollye Barrows is with me to talk about it. Tell us, first of all, who is Donna? Why they call this the Donna’s law? How does it all fit together?

Mollye Barrows: She spearheaded this. Donna Hendrick is from Orlando, and she said she was abused by her choir teacher two weeks after her 15th birthday. And this was in the early 1970s. She didn’t tell anybody about it for 40 years. And when she finally came forward, she suspected that there were other victims of this teacher up to five other victims, and she couldn’t do anything with her allegations and her accusations because the statute of limitations had passed. So she started a petition and basically got 30,000 signatures that got the attention of victim’s advocacy groups, as well as, as you saw the state legislature. And they went ahead and moved forward with bipartisan support and passed this law and bill rather, and then the governor signed it into law.

Mike Papantonio: Yeah. It’s similar to other statutes that have been passed around the country.

Mike Papantonio: And it’s just the logical solution to it. What does, what is, what does this law do for survivors of sexual abuse?

Mollye Barrows: Well, it gives them an option and a voice because it is such a common tragedy actually to happen in this country. And sadly, most of them never really even report it at all, or when they do finally report it other States like Florida until recently had statute of limitations that kept them from being able to come forward. And what we do know also about predators who abuse children, is that they continue to do it. And if you have one child that could potentially report it or a person that’s grown up and could report it, you could be preventing this person from abusing other children as well. So this is going to give victims a voice and an option when and if they are abused and are ready to come forward.

Mike Papantonio: When this opened up in other States, the Catholic church got a new 4,400 cases of sexual abuse because it got, you know, it empowered people to say, yeah, I’m going to, I’m going to go, go ahead and do something about it. And the impact was startling. So this is a great, this is a big victory, isn’t it?

Mollye Barrows: Well, it is a big victory. It’ll be interesting though, because the law only applies to offenses that have been committed since July 1st, when this new law went into effect. So, you know, those kids that have been abused as miners up until then are still subject to those statute of limitations. But from here on out, it’s going to give victims and victim advocacy groups a lot more power. You know, they’re going to have some, some, some meat behind what they, their threats, if you will. They’re going to be able to pursue charges against these predators and perhaps take them off the streets for good, but there’s still a long way to go. And it’s just unbelievable. As you know, our own Kim Lambert is handling human trafficking cases and it is just pervasive worldwide, but the vast majority of children that are abused, it happens before the age of 18. Most of them are girls and it happens that they’re being molested or abused by someone that they know, either an acquaintance or a family member.

Mike Papantonio: Yeah. The human trafficking case that we’re, cases that we’re working all over the country now, it’s an eye-opener because you start realizing that there’s so much, that it’s so organized. That you start seeing the internet sites that know exactly what they’re doing.

Mike Papantonio: They know exactly that they’re part of trafficking. The big hotels, they know they’re part of the trafficking. The airport, if you go to Atlanta airport now, finally, they were busted. They understood exactly what was going on when they saw people coming through trafficked. So now you hear the announcements, if you suspect trafficking is taking place, report something. But this is the, I think these, these human trafficking cases that we’re working are gonna open up a whole, a whole new consciousness of how this takes place. It’s not just isolated abuse most of the time.

Mollye Barrows: It’s not. And what you’re seeing is a perpetuation of more cases of isolated abuse, as well as the trafficking, because it starts on an individual basis as well. A lot of these victims of human trafficking were groomed for it either by the current abuser or maybe by a previous abuser, again, somebody in their family or an acquaintance.

Mollye Barrows: Exactly who is now suing Epstein’s estate to pay her legal bills. So that’s why Epstein victims, if there potentially are more in the state of Florida, can’t come forward because of it didn’t go into effect.

Mike Papantonio: And so the, the, the judge has the right to put him away forever. Instead, he does nothing to Epstein. He literally lets him go to jail when he wants to go to jail for a period of, you know, several months. And everybody around him got away with it.

Mike Papantonio: Everybody around him just walked away because of the way that we, we see political influence. I’m sure it was part of this story too. You know, there’s part of the reason that she didn’t have the right to do a lot of things she did up to now was because of the political influence. We just don’t see the importance of what’s happening here right, right in front of our eyes. Mollye, thank you for joining me. Okay.