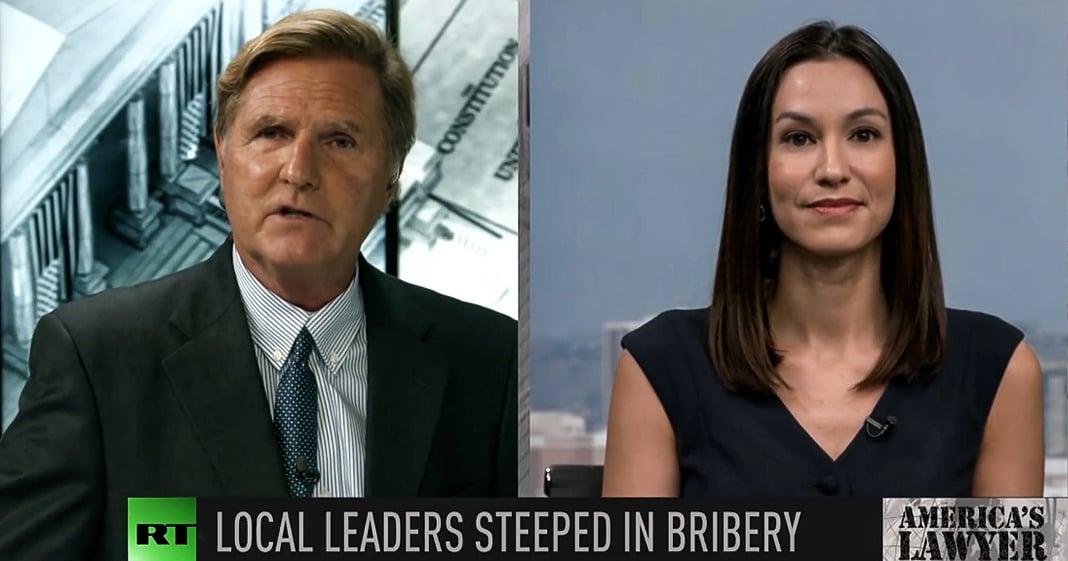 Via America’s Lawyer: Corruption cases arise in City Halls across the country, exposing bribery and fraud scandals among local officials. Mike Papantonio is joined by Brigida Santos to explain more.

Mike Papantonio: A wave of city hall corruption cases across the country expose America’s pay to play problem. RT’s, Brigida Santos joins me now to talk about how politicians sell out taxpayers for personal gain. No surprise there, Brigida. We’ve seen it’s an age old story, but it seems to be getting worse. You’re based in Los Angeles where city officials have been charged with federal crimes. What can you tell me about what’s going on out there?

Brigida Santos: Well, LA city Councilman José Huizar has been charged with one count of conspiring to violate the racketeer influenced and corrupt organizations act better known as RICO for allegedly selling the city to several real estate developers, including the wealthy head of a Chinese company, seeking to build a 77 story skyscraper downtown. In exchange for approving or stalling, large building projects Huizar reportedly received more than one and a half million dollars in bribes and perks, including campaign contributions, lavish dinners and stacks of casino chips. The city Councilman has represented the 14th district covering East Los Angeles and downtown LA since 2005 and has chaired the planning and land use management committee, which he was forced to step down from in the wake of this investigation. If convicted Huizar faces up to 20 years in federal prison.

Mike Papantonio: You know, to me, this, this has a broader involvement than just this one case. For example, when, when you, you had the Russians start spending money in the UK, this, they started spreading money everywhere around the UK. And you started seeing these types of corruption cases evolve. You’re now seeing studies where the Mexican cartel is starting to spread out money through parts of California. And, you know, if you take a look at what’s happened in Mexico with their influence with that money, look, these are politicians that get sucked into that more and more. We’re going to see it. This is a good example. Chinese came in, they wanted to build, they, you know, they don’t follow, they don’t need to follow our laws. They’ll spread money around where they want to spread money around. And that’s what we’re seeing a big, a big way it seems like in California right now. Were any other LA officials involved in this, this case?

Brigida Santos: Yeah. While Councilman Huizar is accused by the FBI of being the mastermind, mind behind the scheme, at least four other people have agreed to plead guilty in connection with the case, including former LA city councilman Mitchell Englander, who stepped down from the city’s governing body during the investigation. Now Englander has been accused of obstructing the inquiry, accepting a paper cup filled with $10,000 in cash from a real estate business person, taking thousands more in cash and of accepting escort services. Englander also sat on the city council’s planning committee and served as a reserve officer with the LAPD. He phases up to five years in prison. So you can see how widespread this problem is.

Mike Papantonio: Yeah, well it’s widespread and I can’t again, you’re seeing more and more stories where they’re drawing parallels. And for example, there are third world countries where there is, there is no police department that’s not corrupt. There is no politician that’s not corrupt. The judiciary is corrupt. The media is corrupt. That’s what money does when it starts being spread around in a big way. That’s what’s getting ready to happen to you in California with some of the cartel money being spread around. And I got to tell you the same thing’s happening in places like New Jersey and Atlanta. In recent weeks, similar city hall corruption cases have popped up in those places, New Jersey and Atlanta. How are politicians pedaling influence in exchange for money? What’s their new game?

Brigida Santos: Yeah, since the end of June current and former public officials at opposite ends of the country have been charged in sweeping corruption cases, exposing the willingness of politicians to sell the authority of their public office for personal gain. These cases in San Francisco, Atlanta and New Jersey involve shady backdoor deals with envelopes, paper bags and cups of money delivered in restaurants, parking lots, political fundraisers, campaign headquarters, and even in hotel bathrooms. And it’s on both sides of the aisle. You have Republican and Democratic public officials taking bribes and engaging in fraud, money laundering, tax evasion and more in exchange for granting contracts and jobs to those who pay to play. These cases are very similar. Government contracts are supposed to go to the companies that do the best work for the lowest price since taxpayers are the ones footing the bill, but there is not enough oversight and there are far too many loopholes that give way to this rampant corruption.

Mike Papantonio: Yeah. Politics and corruption has long been a story in LA, but I just think there’s another aspect to it, to where it’s almost reaching that level where when we analyze the lack of law in a third world country, we’re kind of seeing similarities right now here in the US. Thank you for joining me. Okay.