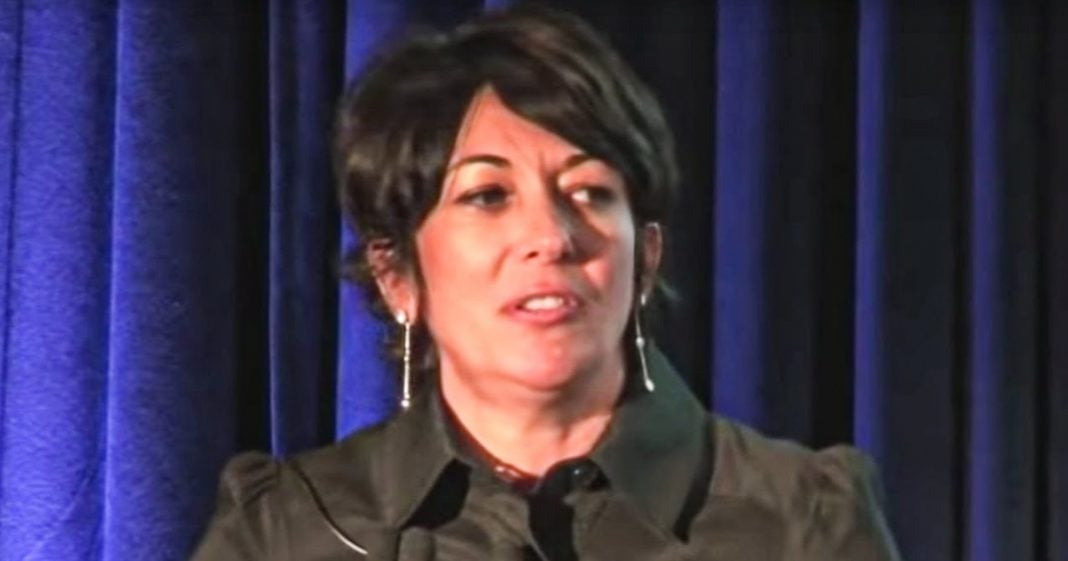 Jeffrey Epstein’s accomplice, Ghislaine Maxwell, believes that her former boss was murdered by people who wanted to keep him quiet. She also believes that she is next on the list and could likely suffer the same fate while in prison. Her fears are not without precedent, as the circumstances surrounding Epstein’s death are certainly suspect. Ring of Fire’s Farron Cousins explains what needs to happen.

Ghislaine Maxwell, uh, Jeffrey Epstein’s alleged accomplice for many, many years, who is, uh, currently serving a time in a Brooklyn, uh, local jail while she awaits trial is terrified for her life. According to one of her close friends who she has remained in contact with, uh, since her arrest earlier this month. And the friend says that Ghislaine has for the past year or so, really ever since Epstein died mysteriously in his jail cell, uh, on August 10th of last year. And that’s kind of putting it mildly, um, Ghislaine’s been afraid that the same thing is going to happen to her. And she especially thinks so, uh, even more now that she is in federal custody, uh, but over the past year, she has hired additional security guards, you know, really taken to hiding away. So nobody could find her. Nobody knew where she was.

That’s why she bought this place. I believe it was a New Hampshire where she was found, uh, through all these little shell companies. So nobody could find her. She was also doing that cause she had clearly done illegal things all through her life and Nina, as you wanted to get away. But here’s the thing, folks, she’s not wrong to be afraid. I mean, I know people like to laugh about the whole Epstein didn’t kill himself type thing. And there’s lots of conspiracy theories. And I gotta be honest with you. This might be one that I’m willing to embrace at least a little bit here. It’s fishy. It is very suspicious. Can you say for certain that Epstein was murdered? No. Can you say for certain that he killed himself? No. I mean the chances of the cameras going out, the tapes getting eaten and the guards falling asleep all at the exact same time that this man dies.

Holy crap. If you were trying to make it look suspicious, you did a very good job of it, but coincidence is do in fact happen. Did they happen in this case? We will likely never know the truth. So Ghislaine’s terrified, especially because she was denied bail. So she is stuck in this little old jail in Brooklyn for probably about a year before she can go to trial. I mean, as we’ve seen, courts are backed up. Courts were shut down for quite some time. They’re just now starting to kind of get things going again, uh, with teleconferencing, not doing a whole lot of in-person trials, but it’s going to be a long time. It’s a long time for her to sit. There is a long time for somebody to come up with some kind of plot or plan. So here is what I am hoping has happened with Maxwell. Two people on this planet knew everybody knew the names, knew the times the locations, two people knew everyone involved in this scam, Epstein and Maxwell Epstein secrets were taken to the grave with him. Maxwell still has hers.

If she wants to have any kind of chance of making a plea deal of getting any kind of reduced sentence, then she better be ready to get, give up those names and those names, by the way, that’s why she’s terrified. There are very powerful men across the globe among those names. So hopefully she has given those names to her attorney and hopefully she is told the attorney in the event, something happens to me, go public release. These names, make them known. We have to know we as a society have to know. We need to know who the predators amongst us are so that we can protect ourselves so that we can remove them from polite society.

That’s why we need these names. It’s not about shaming people. It’s not about voting them out of office. It’s about removing them and letting the women who were abused by them. Finally get a taste of justice. It is about bringing the hammer down as hard as possible on these scumbags TJ’s lane has the names. And hopefully she has given them to somebody else for safe keeping because I believe she’s right. Things could happen to her. And honestly, she’s a scumbag to the end of the day. I don’t much care. What I do care about is the women who were abused for many, many years, who were recruited and groomed to perform these disgusting acts on these powerful men. Those are the women who need justice, but they can’t get justice until the public knows who did this.