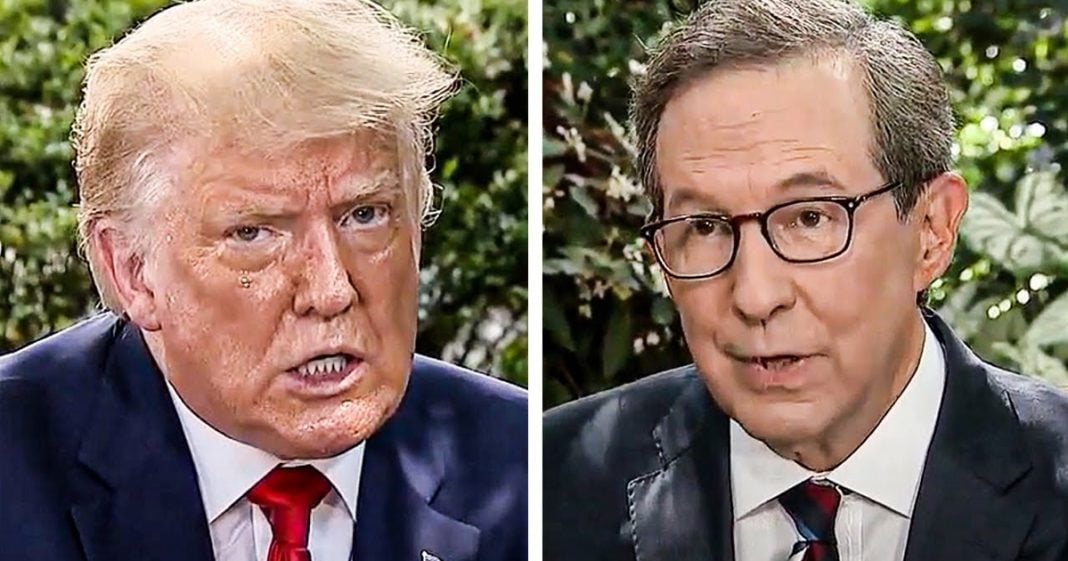 Donald Trump’s reelection campaign is dependent upon, and Fox News host Chris Wallace destroyed every single one of them during an interview that aired over the weekend. Trump was universally mocked and fact-checked in the media following the interview, the public got to see what desperation and panic looks like when it is personified. Ring of Fire’s Farron Cousins discusses this.

Yesterday Fox news ran their interview between their host, Chris Wallace and president Donald Trump. But even before the interview actually ran. And of course, certainly after the interview aired, uh, Chris Wallace had already ruined Donald Trump’s weekend by effectively ruining a large part of Donald Trump’s reelection campaign because let’s face it right now. Donald Trump has two major talking points for his reelection campaign. First and foremost, that Joe Biden, isn’t all there in the head. The second one is that Donald Trump and Donald Trump alone can keep America safe during these uncertain times of civil unrest, which it’s worth noting actually erupted under his watch. So it’s laughable to think that he would be the one to be able to fix things. Seeing is how it actually started while he was president. Nevertheless, Chris Wallace destroyed both of those in beautiful, very calm fashion. Let’s start with the first one. Let’s start with Donald Trump’s claim that Joe Biden just could not pass a cognitive test to save his life. But Donald Trump, the super genius, very stable genius passed it. Well, Chris Wallace has it turns out is taking the test too. And so he wasn’t really fond of Trump bragging about how well he did take a look. People who is more competent who’s got whose mind is sounder

Beats you in that? Well, I tell you what, uh, let’s take a test. Let’s take a test right now. Let’s go down Joe, and I will take a test. Let him take the same test that I took. Incidentally. I took the test too. When I heard that you passed it. Yeah. How did you do? Well, that’s not the hardest task. No, but the last picture and it’s the last and it’s an elephant. I die. You see, that’s all misrepresentation. That’s what it was on the web. So misrepresentation because yes, the first few questions are easy, but I’ll bet you couldn’t even answer the last five questions. I’ll bet you couldn’t take it very hard. The last five, but one of them was come back from a hundred by seven. And let me tell you, you couldn’t answer, you couldn’t answer. What’s the question. Many of the questions I’d get you the test. I’d like to give it, but I guarantee you that Joe button could not answer those questions. Okay. And I answered all 35 questions correctly.

Talk about how that might be my most favorite clip of anything that’s ever happened in the history of media. Because not only was Chris Wallace saying like, yeah, I took the thing to it. It really, uh, you know, you look, is this an elephant? Yes, that is. Or no, it isn’t like that’s, that’s literally the question. Like I told everybody a week or so ago, these are the same kinds of questions. Sometimes a little bit harder that they ask for incoming new students going into kindergarten or first grade, they’re trying to see where your cognitive abilities lie and then to make it so much better. Fox news literally puts the test up so people can see that Chris ain’t making this up. You see the picture of the elephant. You see the different shapes. And Donald Trump is sitting there like he has for the last month telling everybody they were shocked that I did so well on this.

And Chris Wallace, like may want to hold off on the bragging on that, bud. I mean, yeah, you can recognize the triangle and you know what an elephant is fantastic. That’s not necessarily something to brag about. So I love that Chris Wallace absolutely put that megalomaniac in his place. And that wasn’t the only time as I mentioned, this actually started before the interview even ran because Fox news started doing previews of it because they knew this was going to be blockbuster for the ratings. So on Friday they released a clip of the interview of Donald Trump, freaking out thinking Chris Wallace was lying about something. Then calling to somebody off screen to fact, check him only to find out that Trump was wrong and Wallace was right. Here’s what happened. They wanted to fund the police and Biden wants to fund. He does not look. He signed a charter with Bernie Sanders and he said nothing about the funding. Really? It says abolish. It says, let’s go. Alright, well you’ve given me the charter please. Alright. So that led to him

Very interesting exchange, where he had his staff go out and get the highlights from that a hundred page compact that the Biden team and the Trump team, uh, wrapped that the Biden team and the Sanders team had signed any, went through it. Uh, and he found a lot of things that he objected to the Biden has a great too, but he couldn’t find any indication because there isn’t any that Joe Biden has, uh, sought to defund and abolish the police. So Trump literally literally stops the interview to be like, Oh, I’m gonna prove you wrong. Biden absolutely wants to defend the police except Biden doesn’t want to defund the police. Biden’s never said that, you know, he’d have to be a pretty hardcore democratic socialist to call for that. And to be honest, if he were, I would be far more enthusiastic about his campaign.

That would be awesome. I love this version of Joe Biden that you have created in your head. He’s a pretty bad ass guy. Uh, but unfortunately he doesn’t actually exist in real life. And for the record folks, those were not the only two examples of Chris Wallace having to put Donald Trump in his place. Trump went off on some bizarre tangent about the 16, 19 project from the New York times. Uh, he said the following, he said, I just look at, I look at school. I watch, I read, look at the stuff. Now they want to change 1492 Columbus discovered America. You know, we grew up, you grew up, we all did. That’s what we learned. Now. They want to make it the 16, 19 project. Where did that come from? What does it represent? I don’t even know. And Wallace replied with two words. He just said, it’s slavery.

You would think, you would think you would hope you would want the president of the United States to know that. And he didn’t at Chris Wallace had to tell a very straight faced it’s slavery. Then Chris Wallace, of course, was asking him about, you know, you say there’s a lot of voter fraud. There’s not really a lot of voter fraud. Chris Wallace did not. However, mention the fact that we have uncovered quite a bit of voter fraud recently. And 100% of it’s been committed by Republicans, but nevertheless asked him, Hey, you know, you’re saying this a lot. You’re going to accept the results of the election in which Trump said, we’ll have to wait and see now to call them everybody’s fears about that. I do not think we’re at any risk of Donald Trump, not accepting the election results. He may claim they’re fake. He may say he’s not leaving, but guess what?

No matter what he says or does his term ends January 20th, 2021 at 11:59 AM. At that point through no action of his own, he is no longer the president of the United States. If he loses the election, therefore he no longer has command of any of the federal government. The new president, Joe Biden would, and he can easily just say, guards remove this man. And they would have to listen to him. They could not listen to Donald Trump. That is why I say stop freaking out about this. Is there going to be a peaceful transition of power? Hell no. Hell no. But luckily Biden knows a guy who spent eight years in the white house and that’s probably the guy that’s going to show him around. Not to mention if Biden wins. He’s pretty familiar with how things work anyway. So that’s that, that was a phenomenal interview. And I got to tell you, I have a new found respect for Chris Wallace, not just because of what he did to Trump, but because he did come armed with the facts at one point, Trump tried to say that cases are only up because the testings up in Chris Wallace said, testing’s up 37%. New cases are up 194%. That’s not true. You’re lying. I mean, he absolutely came armed with his facts and that is what you always want to see in the media. And unfortunately, it’s something we rarely see in the media today.