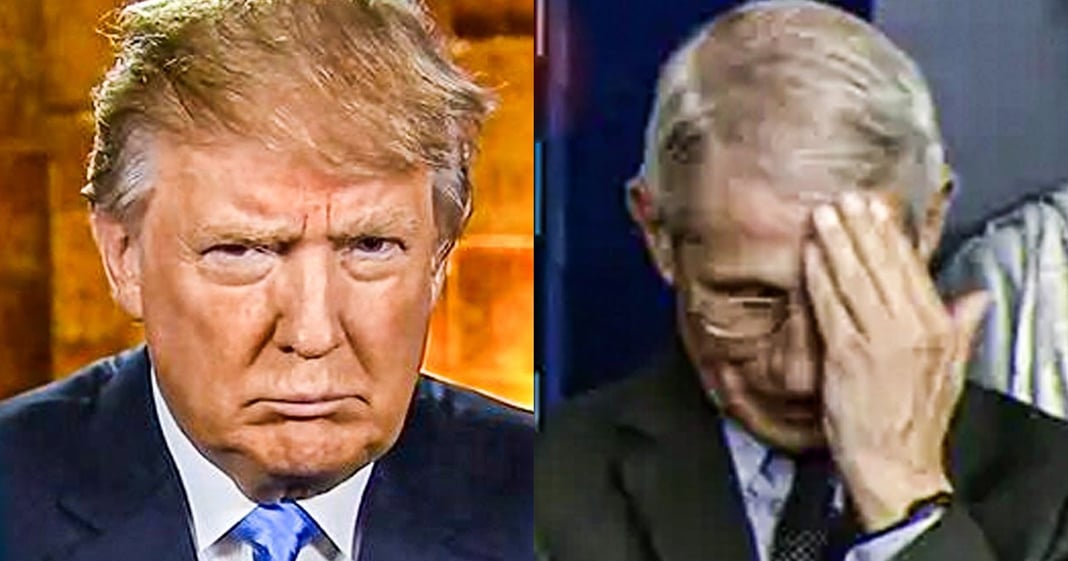 The Trump administration began their week by sending out propaganda attacking Dr. Anthony Fauci to media outlets and they’re ending the week by pretending that none of that ever happened. They have ended their assault on the doctor after they realized that their strategy blew up in their faces and that the public actually likes Fauci and trusts him to handle the crisis more than they do this administration. Ring of Fire’s Farron Cousins explains what’s happening.

So this week began with an unnamed member of Donald Trump’s team, sending out a list of alleged lies that dr. Anthony Fauci told in the early days of the pandemic, they sent that list out to media outlets all over the country. This was part of the smear campaign that had begun in earnest a couple days before that on Wednesday of last week, when Trump’s trade advisor, Peter Navarro, a guy that knows nothing of infectious diseases published an op-ed, where he called out Fauci said the dude’s just been lying since day one. In fact, Navarro specifically did say, he’s lied about everything I’ve ever worked with him on which you’re you’re in charge of trade. So I can’t imagine you would have ever or should have ever worked with him, but okay. Whatever. And so that’s how the week began. They were absolutely running the smear campaign against Fauci.

And then suddenly this Wednesday, you just one week after it officially began, Trump comes out is asked a question about all this stuff about Fauci. And he says in the press conference, I love Fauci our work in them all the time. I have no problem with him. You know, I don’t know whatever Peter did, you know, that’s that’s on him. We, we don’t, you know, agree with that. I don’t agree with what the staffer did. We, we love Fauci. We listened to Fauci. So suddenly suddenly the white house that had this coordinated effort to take down Fauci suddenly on Wednesday, they’re acting like the first I’ve heard of it. Love this guy. It’s my, my boss guy. Right?

So I call him dr. Fauci. You know the [inaudible] ha no, that’s not how it happened. You Donald Trump just actually last Thursday, we’re on Sean Hannity’s program on Fox news, where you said that he, he was wrong about so very many things you said he lied. You did that. We can verify that that clip exists. It’s online. People can find it. It’s in the articles talking about how you’ve suddenly changed your tune about Fauci. We know that you’re lying and we know why too, as it stands right now, dr. Anthony Fauci, yo, even though, yes, he was mistaken about things in the early days. Most of us were, we didn’t know anything. This really is an unprecedented situation. We were learning. As we went, we had to change. Things, had to change. Our beliefs had to change what we knew about it. As new things came in.

That’s what happens. But anyway, Paul show right now, dr. Fauci is the most trusted person in this administration. And I think that actually goes to overall, just in general, most trusted, not just most trusted the handle, the pandemic, but the most trusted Fauci has worked for six different administrations, advising presidents on infectious diseases. This guy knows what he is doing. Is he always right? Nope. But did he intentionally the public in the early days of this one time he admitted that yes, he did. He did that order to preserve people PE for doctors and first responders. So you know what, I’m a give him a pass on that. I really, yeah. He didn’t want people going out there and stockpiling masks and gloves when doctors couldn’t already find them because we saw what kind of animals we became when we ran out of toilet paper.

How you still are hard pressed to go out and find a bottle of hand sanitizer or Lysol or Clorox wipes. And he knew the same thing was going to happen with the masks and the gloves. So he told us we didn’t need them. He admitted, by the way, he came clean and said, yeah, I lied about that. And here is why I did it. When is Trump ever come out and said, Hey, yeah, I lied about something, but let me explain to you why I did. I did it to protect you. I did it for your own good. He’s never done that. His lies aren’t to protect us. His lies are to protect his own ego, to make himself feel better. But he realized that his attacks on Fauci were blowing up in his face. People like him, the public likes him, the public trusts.

And of course he realized that he doesn’t have to trash Fauci. He can just take all the data himself instead of sending it to the CDC, send it over to health and human services where he and his good buddy Azar are going to doctor it up and make things look so much better than they truly are, which is only going to lead to more people being killed. So, Hey, we don’t have to trash Fauci anymore. We can, you can just change the data. And then we’ve got nothing to worry about. That’s their new plan. That’s why they’ve reversed. Course. It blew up in their faces. So now they’re trying to screw everybody, not just Fauci anymore.