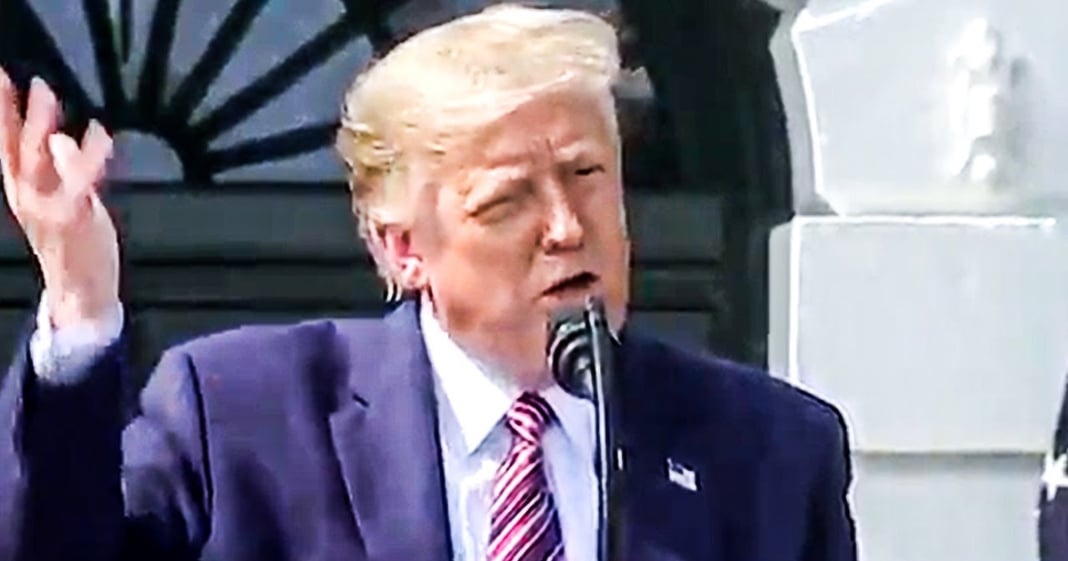 During a White House event on how awesome it is to have no rules in the country, Donald Trump went on a truly deranged rant about water pressure and dishwashers. This is not the first time that he’s made this point, and it has literally never been true. There are very real water problems in this country, but they aren’t the phony ones that Trump is talking about. Ring of Fire’s Farron Cousins discusses this.

So yesterday, there was an event at the white house to celebrate deregulation. They had a two trucks out there with them, one blue representing Democrats, one red representing Republicans. They had a big crane that lifted regulations off of the red truck, dumped him onto the blue truck. And it was a whole big event, uh, that probably cost thousands and thousands of our tax dollars. Uh, but also that’s not even the weirdest part. I mean, that’s, that’s a stupid part, but it’s not the weirdest part. The weirdest part was when Donald Trump went on his rant about dishwashers, water, pressure, and light bulbs. Here it is

Dishwashers. You didn’t have any water. So you’ve been the people that do the dishes, you press it and it goes again and you do it again and again. So you might as well give him the water because you’ll end up using less water. So we’ve made it so dishwashers now have a lot more water. And in many places, in most places of the country, water’s not a problem. They don’t know what to do with it. It’s called rain. They don’t have a problem and old fashioned incandescent light bulbs. I brought them back. I brought them back. They have two nice qualities that cheaper and that better. They look better. They make you look so much better. That’s important to all of us, but they’re better and a much cheaper. And they were mandated out, legislate it out. And we brought them back and they’re selling like hotcakes

Where to begin. Right. I guess, you know what, let’s, let’s start with the light bulbs. Let’s, let’s go ahead. And we’ll just deal with the light bulb thing first, because that’s the easiest, you know, the cheap, the last, um, here’s the thing they’re actually not as inexpensive as they used to be because once they were brought back, they went ahead and jacked up the price so that it was pretty much even with all of the, uh, other light bulbs out there on the market, the led bulbs. Um, so that’s not true, but I don’t expect you to know that because you’ve probably never actually purchased light bulbs in your life. Uh, not to mention the fact that they are far less efficient in terms of energy. So they cost you more in the long run over the life of the bulb, which by the way, the life of the bulb, isn’t very long, especially compared to the led bulbs that can last for years.

Whereas the incandescent bulbs at best with daily usage will last a couple of months. So people spend more money. You didn’t help them at all. Nobody out there was clamoring to get these old fashioned light bulbs back. You know, you’re literally taking us back in time. We had essentially made something better that hadn’t been really touched for a hundred years. And you’re like, wait a minute, let’s go back to that. I know we’re making some progress here, but let’s just go back in time a little bit for literally no reason other than I hate Obama. That’s why you did that. Uh, now the dishwasher thing, you gotta run your dishwasher. Eight, nine times. He says, no, there’s literally nobody in the country that’s ever had to do that. Nobody, nobody.

And if you think there is, do me a favor, find them, uh, send them to my Twitter account so they can DM me and let me know that yes they have in fact had to do that because of democratic regulations on water pressure. That’s the thing, though. It has to be for that reason. You can’t just put it the dirtiest thing in the world. And the dishwasher asked to be for the reason Trump is saying it is that didn’t exist the way there were no regulations. The Democrats put in place that lowered a household’s water pressure. Trust me. I have been writing and researching regulations for 16 years. No such thing existed. He’s lying to you and he’s doing it in an exceptionally deranged way. You want to talk about water problems in the United States that you actually could do something about how about the fact that we have nearly 3000 water systems in the United States.

One third of the country right now is drinking water that has a higher level of lead contamination than Flint Michigan ever had. We have 3000 Flint. Michigan’s all over this country. And by the way, Flint, Michigan itself still doesn’t have clean water. You as president could actually do something about that. You could solve one water problem, a real water problem here in the United States. But you refuse to do that because you don’t get to do a big grand showing at the white house and have your big trucks out there and Ooh, crane with your, with your name on it, for some reason to, yeah, you can’t do that. If you actually fix a real problem. So you create phony problems, then you pretend to solve them. Then you hold an event for yourself so that you can make yourself feel better. Meanwhile, Americans are being poisoned every day by our own tap water that no president left or right has felt they needed to do anything about.