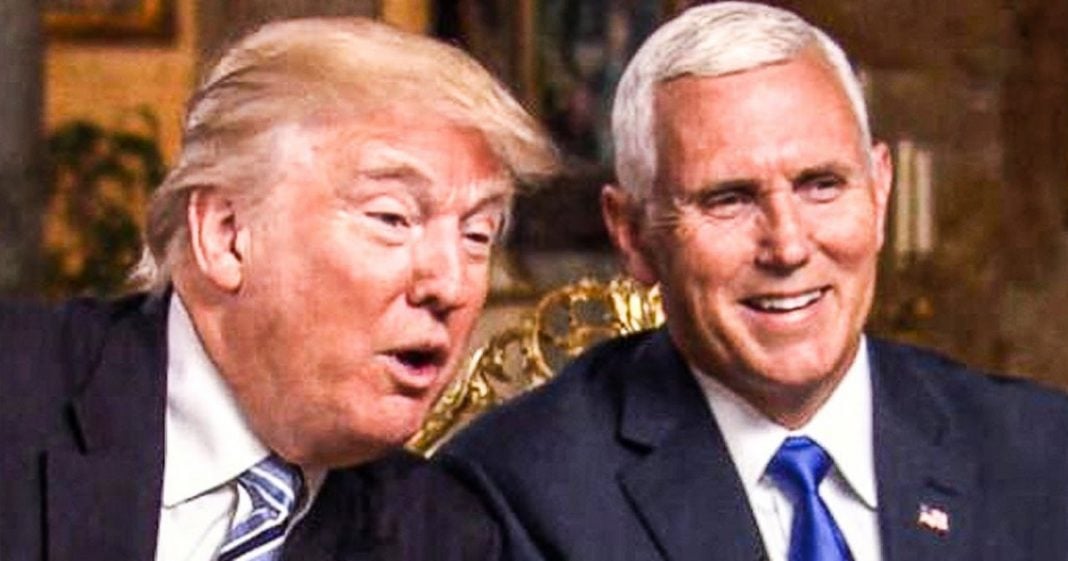 At this point it is hard to argue that Donald Trump and Mike Pence are trying to protect Americans from the pandemic. In fact, it almost appears as if they are on the side of the virus. They are insisting that schools reopen next month, even as parents disagree and school boards struggle with what to do next. This administration is insisting that it happens because they don’t care if they have to sacrifice a few people to keep their jobs past the election. Ring of Fire’s Farron Cousins discusses this.

This week, Mike Pence went over to Louisiana, gave a speech, and he told residents of Louisiana who are currently actually debating on whether or not to even do in person schooling this year and whether or not to just keep the distance learning. Mike Pence told them it is imperative that we get these kids back in school. Now Louisiana, much like other States across the South is experiencing a surge in new coronavirus cases. And Louisiana is actually doing the smart thing saying, Hey, it’s not safe to send the kids back. We may need to delay the start of the school year, or we may need to move back to distance learning. We haven’t made a decision yet. The Louisiana says, and then the vice president comes in. It says, Hey, you got to send the kids back. We’re we’re kind of counting on you, Louisiana. Believe it or not folks, that’s a state that could end up being a blue state. So we need you. I need you to show the way we need you to send the kids back to school so the parents can get the work. And so everything can be great. And don’t worry because as Mike Pence told the crowd, uh, kids have lower risk factors for catching Corona virus. So they’re probably not going to get that sick from it.

So send him back After what we’ve seen for the past couple of weeks, the talking points from this administration, the actions of this administration, it is abundantly clear that Donald Trump, Mike Pence and the rest of the Trump administration are actively trying to get Americans killed. It doesn’t matter if that American is one year old or 80 years old or anything in between or above or outside of they’re actively trying to get us killed so that they don’t lose their jobs. After November. That is what is happening here. That’s what they’re doing. That’s what all of this is about. They wouldn’t be pushing for schools to reopen right now, if it wasn’t an election year, they wouldn’t. The economy is in the toilet. We still have 40 million Americans, an extra one and a half million, by the way, yesterday added to the unemployment rolls. So that number is still going up. You had one good week and then everything went back down to crap and they’re freaking out because if the economy is bad, they have a 0% chance of winning reelection. No matter how many stumbles Joe Biden has,

As it won’t matter. Or if the economy is in the toilet, nobody’s going to reelect Trump. And the only way they think they can get the economy rolling again, is to send the kids back to school. So the parents can go back to work and not have to stay at home with the kids, but they didn’t even consider another possibility. How about you increase the stimulus to Americans? You know, we look at what these other countries did, Canada neighbor to the North, great example, couple grand for every citizen. During the months of the pandemic, they’re not seeing the numbers that we’re seeing because people are actually incentivized to stay home and not spread it, but they have enough money to where they can still pay their bills. They can still do online shopping so they can still help the community. You can order from a local restaurant. You just can’t go sit there.

They’ll have to deliver it. You can still give your tip to the person who delivered the food to you. Instead of the person who brings it to your table, the economy can still work. If the government was willing to step up and put money in the hands of people, instead of the major corporations, our government chose corporations. And now look where we’re at. We’re having to sacrifice our fricking children so that Trump and Pence can win reelection. And I am sorry. It wouldn’t even matter if they were Democrats, if they were Progressive’s. If they were, you know, FDR himself, there isn’t a politician alive or one throughout all of history that I would sacrifice my own children for.