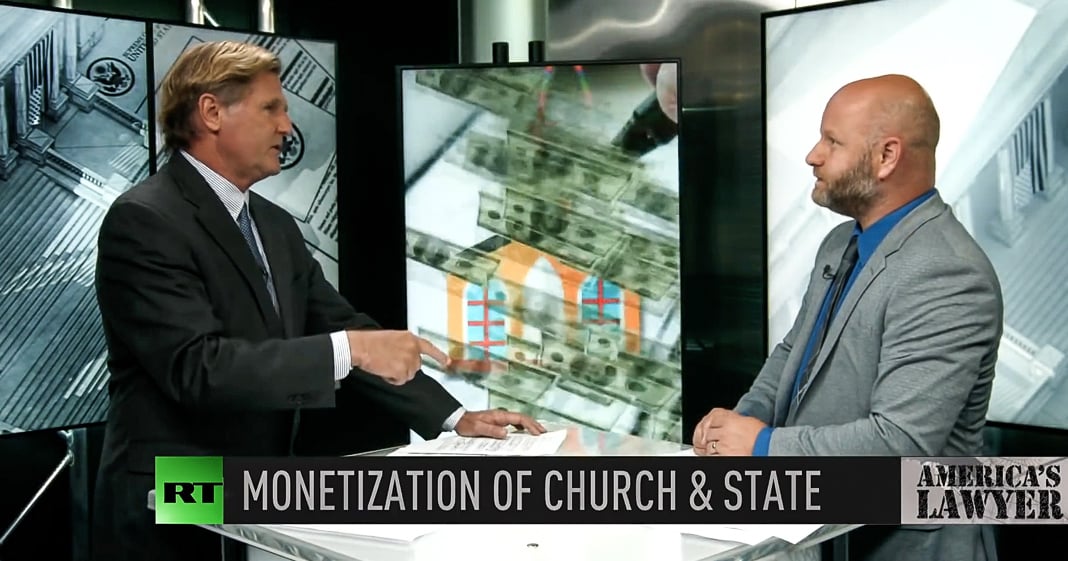 Via America’s Lawyer: Countless small businesses have clamored for federal PPP loans to support their livelihoods, yet billions of dollars are given instead to organizations like the Catholic Church and businesses closely tied to lawmakers. Mike Papantonio & Farron Cousins discuss.

Mike Papantonio: Many businesses connected to lawmakers took huge sums of money from the PPP funds set up by Congress. And so did the Catholic church and there’s plenty of corruption to go around and we’re going to talk about it. I’ve got Farron Cousins from the trial lawyer magazine, Farron, I suppose the most agonizing thing about this to me, with the Catholic church taking in more than $3 billion. Okay. More than $3 billion is because they brought it on themselves.

Mike Papantonio: With the, if they, if there’s another abuse scandal, you know, it’s, it’s never a surprise. You hear about it every day. And I think they’ve paid some ungodly. I’m almost 600, I mean, the numbers are staggering, $600 million in just, in payoffs to people who have been victims of abuse, and now they’re saying, well, we want PPP money.

Farron Cousins: And so then, you know, once the pandemic hit, church’s had to close down. And so the Catholic church sent its lobbyists to Washington DC something that I didn’t even know they had or that they needed. But the Catholic church puts their army of lobbyists, millions of dollars worth, sends them to DC before the first relief package gets passed. And they said, make sure we can get some of this money. Everybody knew lots of money was coming. Catholic church wanted it because they needed it as you said, because they had to pay off all of these assault cases.

Mike Papantonio: And they continue to pay.

Mike Papantonio: So, basically taxpayers gave them money to pay off their assault cases from these, from these bishops and such that are still in the business. I mean, they’re still doing business. What was it, Pope, Pope Francis says to, to, to one of them, he says, listen, you just need to go and for 20 years you need to make amends with God. Not, you need to go to prison for what you’ve done. You just need to make amends with God. I mean, that’s still the mentality and we paid them $3 billion, probably more.

Farron Cousins: Right that we know of. And that’s the, that’s the scariest part of it is that that’s all that we know of. The reports say that the real number is likely much, much higher than that. But it is very important to understand that they spent millions to get these billions. And they are the ones, the Catholic church’s lobbyists who made it to where they were eligible and other religious organizations in this country were eligible for these PPP loans. You were supposed to not get them if you had more than 500 employees, they created the exception for religious institutions. They should not have gotten any of this. They didn’t need it. You have some churches that got their hands on this money. One of them in particular that just spent $70 million on a new glass cathedral. They waste money. This money is not going to be spent on helping the homeless or helping the poor or feeding the hungry. This is for their own greed, their own selfishness and their own corruption is what they’re using it for.

Mike Papantonio: Well, when you go to Italy and you see these monstrosity buildings that they’ve built there in the Vatican and you realize that’s being paid for by $20 here and $20 there of people all over the world. It’s, it’s, it’s really kind of a sad story. I mean, it all, it honestly, as you walk through those buildings there at the Vatican and you see gold everywhere, and you know, pictures of little male naked cherubs everywhere. I mean, you know, you go what’s, what is it that they’re not connecting with? That the rest of the American public thinks this is wrong. And I think that is, this story gets out there, they’re going to think this is wrong. Why are we giving this, why are taxpayers paying for church business anyway? You see.

Farron Cousins: Yeah. At at time when we have real small businesses that needed this money that are having to close their doors for good.

Farron Cousins: You know, they were employing people in the community providing a good or a service to that community. The real, you know, politicians always tell small businesses are the backbone of this country. They let them die because they got influenced by these lobbyists, gave billions to pay off sexual assault lawsuits.