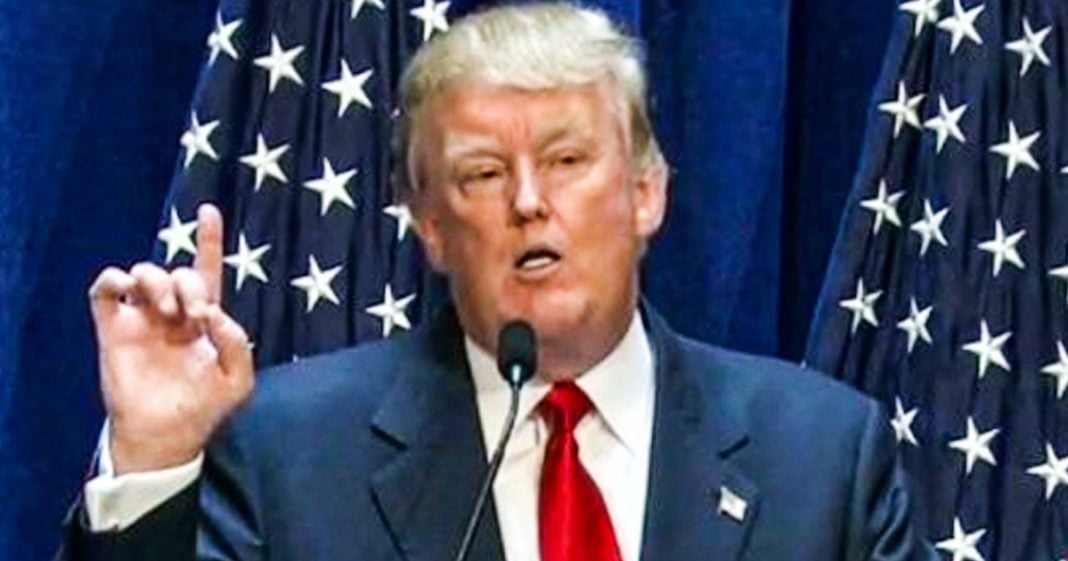 Donald Trump is a powder keg ready to explode right now. Not only did he have to fire his grossly incompetent campaign manager this week, but the GOP also announced that they would be scaling back his convention in Florida due to the fact that the virus hasn’t magically disappeared. This will likely prevent Trump from getting any kind of “convention bounce.” Ring of Fire’s Farron Cousins discusses this.

The Republican national committee, the RNC finally decided to make a good decision, uh, for the first time in years, to be honest, this decision was they’re going to scale back the Florida part of their 2020 nominating convention because of the fact that the state of Florida has become one of the hottest hot spots in the United States for new COVID-19 infections. And the organizers, the people in charge of the Republican party have pretty much hit the point where they can’t continue to deny that this thing exists. They can’t bury their heads in the sand. They can’t keep thinking, Oh, it’s going to go away. They understand the very terrifying reality. And that is that if they come down here to Jacksonville, Florida, if they pack that convention center, all hell is going to break loose in about a week to two weeks. So here is what their scaled back Florida convention is going to look like a it’s a four day convention.

So for the first three days, all of those events are only for the delicates that’s it. You don’t get to bring your guests with you. You don’t get to bring your alternates. If the delegates themselves cannot show up to this event, then they just don’t have a representative there that’s it? No public, no nothing. There’ll be cameras, right? There’ll be reporters outside. You know, you can probably, they’ll probably set something up so you can live stream the event, but nobody else, because they don’t want to risk spreading this virus around. That’s very, very smart until of course you get to day four. And this is when the RNC decided, well, we can either be stupid and make Trump happy, or we can be smart and piss him off. Guess which decision they went with. I give you a hint. You’re allowed to bring people into the speech.

When Trump is talking, they’re going to pack that arena for Donald Trump, because that is what he wants. That’s actually why he brought it down to Florida instead of up in North Carolina, after he fought with the democratic governor up there, because the governor said, no, I’m not going to let you pack an arena during a pandemic. You morons our governor down here in Florida, says hail, yeah, come on down a Hill. He doesn’t talk like that, but I’m pretty sure that’s what the voice in his head sounds like. So here’s the thing. First three days, then you’ll play it smart. Then you can play it. Cool. You know, they’re gonna make sure that they do everything to minimalize the risk, but then on day four, the day that Trump is actually in the building, like, nah, screw it. Everybody. Come on in, let’s pack this arena. Let’s have the president be able to look out there and see all your smiling, wheezing, coughing faces. Now I can’t decide if they’re actually trying to appease him or if they’re trying to somehow take him out with the virus, like to pack them up in a room with 20,000 people, coughing, breathing, sneezing, wheezing, all of them

That. And then they’re just going to slip out the back door like, alright, we did it. This is such a stupid decision. And honestly, it’s not funny because the sad reality is that there’s going to be people coming from all over the country to go to that, uh, arena where Trump is speaking and accepting the nomination officially, they’re going to catch the virus. They’re going to take it back home with them. And then it’s going to come. It was a new spread, a new cycle of this. They’re not going to be social distancing. Most of them aren’t going to be wearing masks. This is a recipe for disaster in the Republican party. Knows it. That’s why they’re not willing to risk themselves, but Trump and his crazy supporters. Sure. They don’t care if y’all get sick at all.