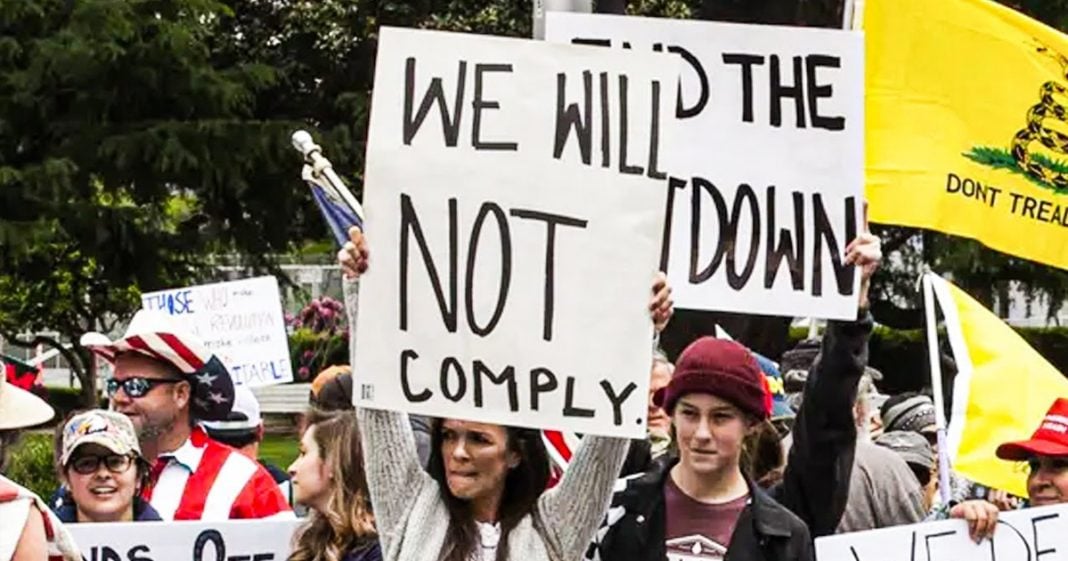 Starting next week, major retailers including Walmart, Target, CVS, and countless grocery store chains will be instituting their mandatory face mask policies, which will inevitably lead to confrontations and violence from the delusional anti-mask crowd. These stores need to have a system in place to deal with these freaks so that their workers do not get injured or worse. The tantrums are coming, and the stores better be prepared to handle them, as Ring of Fire’s Farron Cousins explains.

Starting Monday, we can expect more and more of those viral videos of those anti mask crusaders, throwing temper tantrums at their favorite stores because starting Monday and going throughout next week, uh, many major retailers throughout the United States will be implementing mandatory mask policies, which means if you are not wearing a face mask or a face covering or a face shield, you don’t get to come in. And this includes a lot of places like Walmart, target CVS and grocery store chains throughout the country. Uh, Publix, uh, being a big one that is requiring face masters. You can’t command if you don’t have the mask. And here’s the thing. I, 100% support this policy. I think every business in this country right now should have mandatory mask policies. That is the best way to slow the spread. We know that from looking at other countries that succeeded, okay, the masks and the social distancing pretty much did the trick, but we also don’t have videos all over the internet.

Have, you know, crazy people from China or crazy people from Italy, freaking out, cause they were told to wear a mask. Oh my God, I’m sure it happened a couple of times, but nowhere near to the extent that we have already seen here in the United States. And again with these policies coming into place next week, it’s gonna get bad. Uh, we’ve already seen instances, uh, in just the last couple of days, actually, of a man in Walmart with his daughter who sees somebody not wearing a mask and says, Hey, excuse me, you know, could you put a mask on, please? We need to do this. And the man pulls out a gun, then pulls out a gun on the guy who asked him to wear a mask. We have seen anti mask, people beat up people asking them to put on masks. Okay, this isn’t just one of those care and freak out videos.

This is real honest to God, anger and violence. Being directed towards people who are doing nothing more than saying, Hey, could you be a decent human being for 10 fucking seconds? But for some people that’s too much because it allegedly impinges upon their freedoms. These private businesses have every right, thanks to you guys, by the way you conservatives, they have every right to tell us what we can or cannot do in their businesses. They have every right to tell us who can and cannot walk inside. And if they want to discriminate against people without masks on, then thanks to your Supreme court cases. They can actually do that. So yeah, chickens kind of came home to roost on that one, right guys, but these mass policies are necessary. So what else is necessary? It’s necessary that these major corporations put some kind of safety protocols in place for the employees who are going to be in charge of standing at the doors, keeping out the non maskers.

We’ve seen videos before in areas where masks were mandatory, uh, the door greeters, whoever it is. One of them at a Walmart getting shoved, getting pushed, getting kicked by somebody, not wearing a mask who desperately had to get into that. Walmart, this is not acceptable. We cannot let these workers be assaulted by these psychopaths. So something needs to be done. They need to have some kind of system in place to strain these people to remove these people. I don’t know which one, but you have to have some kind of protocol in place to protect the safety of that employee who is most likely, probably making minimum wage. You know, eight bucks an hour is not worth getting the hell beat out of you because you ask somebody to put on a mask or leave. But that’s what these corporations are going to be asking their employees to do.

So it’s great that they’ve put these policies in place. It’s absolutely horrendous because we know they do not have the safety protocols in place to protect their employees. When all of these anti maskers start freaking out and intentionally, by the way, I’m going to go ahead and make this prediction. Now they’re going to intentionally try to make these viral videos so that they themselves can look like the hero. Like I’m fighting for my freedoms of not wearing a mask. And then they’re going to be kicked out. They’re going to be dragged out. They’re going to start trying to call on people a hundred percent. That’s going to happen. And with Walmart’s policy going to going into effect on Monday, I’m willing to bet that by early afternoon on Monday, we’re going to start seeing those videos protect the workers. That’s what’s important here. These are the people that have been on the front lines of the other fight. You know, you’ve got your medical professionals on one side and the other side, you’ve got these essential workers who have been there, you know, risking their own health to work in a grocery store. We owe it to them to protect them.