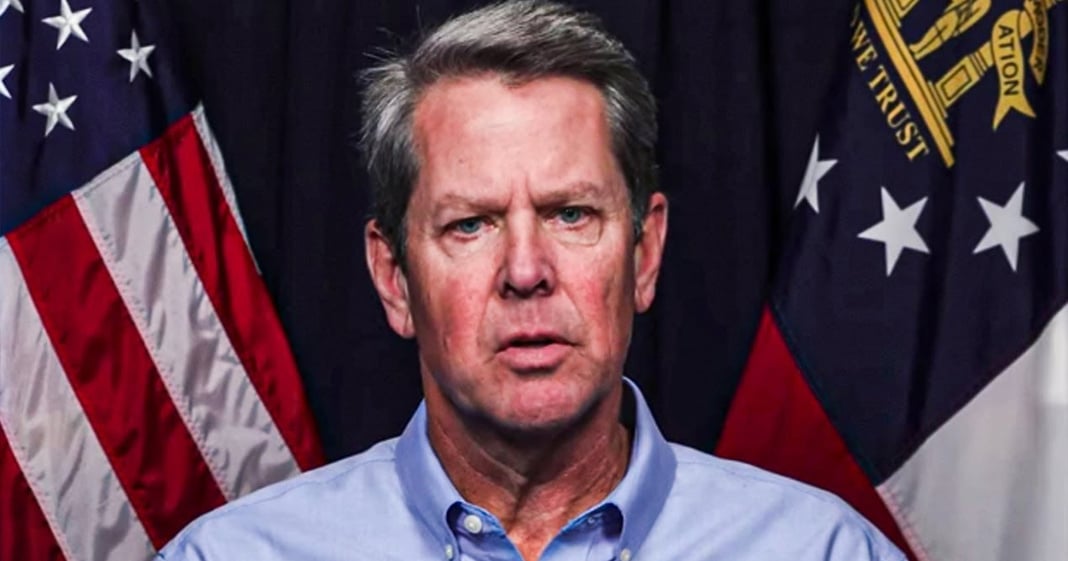 Georgia’s Republican Governor Brian Kemp has now overridden all local mask requirements in his state, and instead has replaced them with a universal “you should wear a mask but aren’t required to do so” policy. It does appear that the Governor has the authority to do this, but it also appears that this will lead to a dramatic increase in new cases in the state. Ring of Fire’s Farron Cousins explains what’s happening.

Georgia’s Republican governor Brian Kemp announced yesterday that he is officially overriding all of the local mask requirements throughout the state of Georgia. And instead replacing them with a policy from his office that says, if you’re going out in public, it would be great. If you could wear a mask for us, you’re not required to, by any stretch of the imagination, but, uh, you know, masks are helpful. So you should wear one. And by the way, that is replacing in at least 15 different cities in Georgia requirements that say, if you’re going to be out in public, you will wear a mask. Brian Kemp has now made those local orders. Unenforceable. Why? I think that’s the big question that a lot of us have, and we know the obvious answers, right? And that’s, what’s so sick and twisted about this because we have idiotic Republicans and yeah, it’s pretty safe to say that more than 95%, I imagine of these anti mask psychopaths out there. Those are Republicans. Those are absolutely brain dead, fake news, twisted Republicans that are out there helping this virus,

Whose side you’re on, by the way, if you’re one of those numb skulls out there, you’re on the side of the virus and this is insane. How do you think all of these other countries were able to get it under control? Whereas we couldn’t, what’s the frickin difference here? The difference is that most of those other places, aren’t dealing with a uniquely arrogant and idiotic populace. They know what they’re doing, and they accept that their government is not trying to hurt them. They don’t have huge swaths of the population that believe in these idiotic conspiracy theories that somehow wearing a face mask to the grocery store is the government’s way to control you. It takes a special kind of stupid to believe something like that. And yet, here we are, and we have lots of Americans who legitimately believe that these folks need psychiatric help, not even evaluations. At this point, we can determine something is wrong. And it’s these people who are holding us.

I mentioned the fact that we have politicians like Brian Kemp, a dude who, by the way, stole the fricking seat. He shouldn’t be the governor of Georgia. That should be Stacey Abrams. But Brian Kemp, as secretary of the state, secretary of state, excuse me, during that Georgia election purged voters off the voting roll. Most of them Democrats, uh, closed down polling places, moved polling places at the last minute, delayed voter registrations in the state. He did everything humanly possible to suppress just enough votes to make himself governor and Stacey Abrams. Not right now, he is doing everything possible to suck up to weeks, slim minority of crazy people in his state, because that’s what they are by saying, I know 15 cities are trying to do the right thing, but I’m going to come along and tell them you can’t do the right thing because that’s the kind of crazy Georgia has sitting in their governor’s mansion right now.