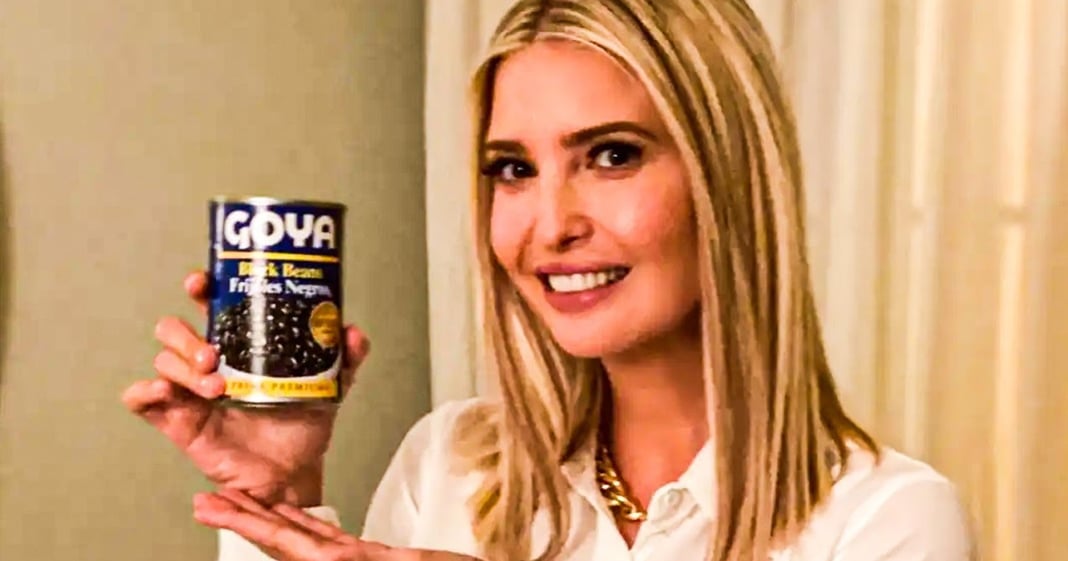 Ivanka Trump might have thought that her little Goya stunt on social media was cute, but in reality it was a very clear violation of federal ethics laws. Once again, the administration that literally shouts “LAW AND ORDER” every day has broken another law, and will likely face absolutely zero consequences for what they’re doing. Ring of Fire’s Farron Cousins explains what’s happening.

It’s no secret that the Trump administration has a let’s just to put it nicely, say not always been on the right side of the law. And yesterday it appears that a member of the Trump administration, once again, violated federal laws. And, uh, this time it happened to be Ivanka Trump with her little photo that she posted of herself, holding up a can of Goya black beans to show her support for the Goya CEO who just last week was at the white house. Any praise Donald Trump, uh, people on the left got pissed off, said they were going to boycott Goya and Ivanka. Trump comes out well after the fact, by the way, poses with her little can of beans and that’s against the law, actually, you can’t do that. Believe it or not folks, because that is a violation of 5 CFR 26357.02 federal law

That States and employee shall not use his public office for his own private game, for the endorsement of any product service or enterprise or for the private gain of friends, relatives, or persons with whom the employee is affiliated in a non-governmental capacity. Now, if that statute sounds familiar, you read too many legal books. Uh, but no, if that statute sounds familiar it’s because that is the very one that Kellyanne Conway broke, uh, ironically by Hawking Ivanka Trump’s products. When she got on TV and told people go by, Ivanka is junk. And now Ivanka has found herself violating that same statute by posing and propping up and doing a little commercial for Goya. This whole thing is ridiculous, by the way, like this has bugged me, not just what the Goya CEO said, because that was pretty gross, but the response from the left as well, and typically I I’ve been doing, uh, you know, the best I can to, to not go after my friends on the left.

And I’m not going after them today, but we have done plenty of segments here on ring of fire as have most of those other folks as well, uh, mocking a whole of those right wingers who let their Nike shoes on fire when Nike Holland, uh, hired Colin Kaepernick. And they said, well, we’re done with Nike. So they literally lit their shoes on fire. They blew up. They’re very expensive Yeti coolers when Yeti was no longer going to offer a discount for NRA members, we’ve mocked them relentlessly for their ridiculous little forms of protest. Um, and I understand, I really truly do that. What the Goya’s CEO did by praising Trump, um, is absolutely disgusting. It is actually a real grievance, but this is the kind of thing that it breeds when we all go out there and say, we’re boycotting

Cool. You don’t actually even have to announce that though. Did you know that? Did you know that you can do something without letting the world know that you’re going to do it because that doesn’t even serve a purpose? Just to say it, you can, you can just do it next time. You’re in the store. Just don’t buy that. I honest to God didn’t even know what Goya is. I didn’t know. Never bought it. So there’s that. But anyway, yes, Ivanka Trump very clearly broke the law. Not to be outdone though. Donald later in the day, decided to get in the phrase. Well, I posted a picture of him at his desk, in the oval office, whole lineup of Goya products right there in front of them. Maybe that’s his lunch. I don’t know it was a lot of food, but you know, he’s a pretty hefty guy, but folks, this is ridiculous. This whole thing is ridiculous. If you don’t want to buy Goya foods, fantastic, don’t buy it. But right now, what the president is doing is illegal.

Technically by definition, by us code is fricking illegal. What Ivanka Trump did was illegal. And what’s disappointing about all of this is that neither of them are going to face any disciplinary action whatsoever because that disciplinary action would actually have to come from the president himself. Obviously he is not going to discipline him and he would probably love to, but will not have the opportunity to discipline his daughter. So that’s that they continue to break the law. They somehow continue to get away with it because that’s the way our laws are written in the United States. That’s disgusting. Like that’s the more disgusting part of this story. If we’re being honest here, the fact that these numskulls can, can break the law like this, they can do these things. And there’s literally nothing we as a public can do about it because it’s the president himself who would have to enforce it, how sick and twisted is that, right? It’s almost as if the people who originally wrote these laws in the early days of the country, knew that presidents were going to be corrupt pieces of crap and did everything they could to protect that office.