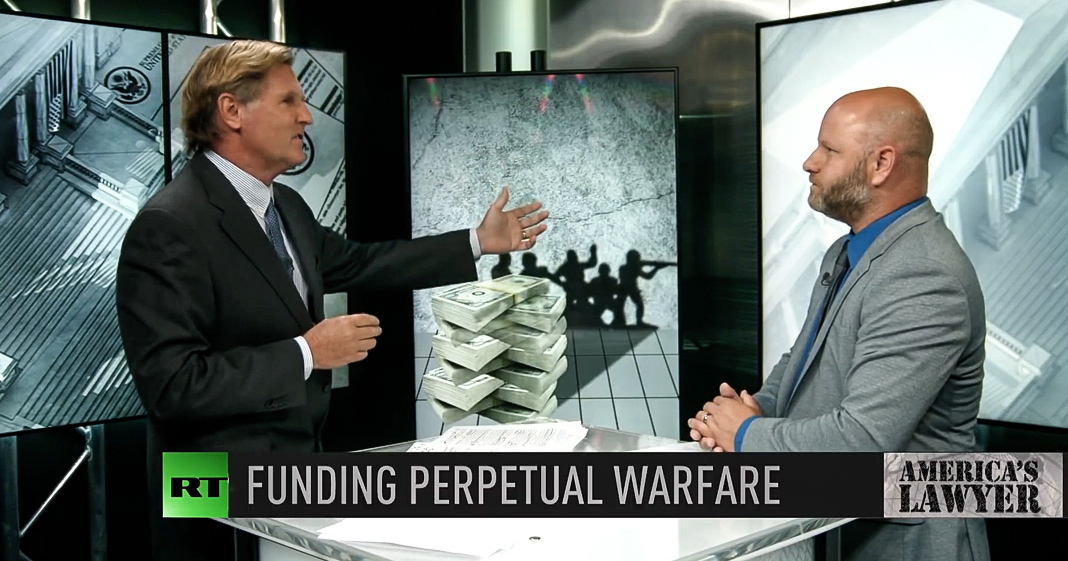 Via America’s Lawyer: Capitol Hill approves yet another massive military budget for the Afghanistan War while the Coronavirus pandemic continues to ravage our economy. Mike Papantonio & Farron Cousins discuss.

Mike Papantonio: Working Americans are struggling to pay their bills during the pandemic, but Congress just opened up their checkbooks to give the military industrial complex, another $740 billion. And at the same time they did it the war pimps, the war pigs, I like to call them, they want a war all the time. The Liz Cheney, the Dick Cheney crowd, who now has become a Democrat crowd where you have Democrats buying into this whole story, we have to stay in Afghanistan forever. And why? Because the same Democrats that voted though, we’re not going to pull out of Afghanistan, follow the money on those Democrats. Go ahead. Pick it up.

Farron Cousins: Right. We have this Democrat controlled house armed services committee last week came up with the new budget for the military that they want to get passed, $740 billion at a time when 31% of Americans weren’t able to pay their mortgages this month, 30% last month couldn’t pay because we’re in a pandemic. They keep telling us there’s not enough relief funds. We can’t give you another stimulus check. We can’t keep increasing unemployment. It’ll make you needy. But we’re going to write a $740 billion blank check to the military industrial complex, to the Pentagon because when it comes to war, when it comes to the military, there is always money to be found. When it comes to helping people, sorry, there’s nothing left.

Mike Papantonio: Let me tell you, let me tell you where it really lands, the media. The media is so much a part of this story. It’s almost like we have a whole generation of people of these young journalists coming out of journalism school. I suppose, hell I don’t know if they do the have journalism school anymore. But they’re coming out of journalism school and, you know, they’ve been raised on an entire generation of news that surrounds Glee. What’s happening to the actors in Glee? Who is, who is Justin Bieber marrying today, or who is he hanging around with? So you have these journal, I call them journalists light. They aren’t journalists. These are kids, I promise you would not have made it through journalism school 25 years ago. And it’s their lack, their lack of being able to look at a case like this and say, this is what we should be reporting. The military has $740 billion that they’re giving away that, oh, by the way, is 15 times higher than the Russia military.

It’s what, half a dozen times higher than the Chinese military. There’s nothing even close. We can’t even use the weapons we have. We have a thousand of everything. And the military at one point was saying, we got too much here. But the Democrats, the Democrats, I love this. It used to be a, you and I would talk about a story like this, we’d talk about Republicans. Now it’s the Democrats. The Democrats have bought into this war forever. You know, look, we were going to get out of Germany. We’re taking 10,000 troops out of Germany, which seems like a good idea. We’re taking our troops out of Afghanistan, which seems like a good idea. But the weapons industry, they don’t like it. And now the Democrats who make big money from them, they don’t like it either.

Farron Cousins: Well, no. And as you pointed out, it’s a lot of it is because the media gets this money too. You know, these checks may not all go directly to the media. Some of them do, by the way.

Farron Cousins: Pentagon does pay Hollywood. They pay television producers to make these pro-military themes. But that’s a story for another day, but this one.

Mike Papantonio: A good story, by the way, we need to do this story.

Farron Cousins: Absolutely. But this money goes to these defense contractors who then as we’ve talked about a hundred times, turn that money to MSNBC, to CNN and say, we’re going to advertise products that your viewers can’t even purchase, but we’re buying your loyalty with this money.

Mike Papantonio: Polaris missile. Okay. So you have Boeing, McDonnell Douglas advertising missiles. Are you going to go out and buy a missile? No. The reason MSNBC is covering this story, the reason they’re doing the advertisement, they’re getting a ton of money from the ad business. CNN making a ton of money from the military complex. That’s why these idiots won’t even cover a story as important as this. Glenn Greenwald, buddy he’s on their track.

Mike Papantonio: He’s, Green, I think it’s the best coverage I’ve seen of this problem. So, you know, we can’t expect anything from the media. We have to go other places to get stories like this, don’t we?