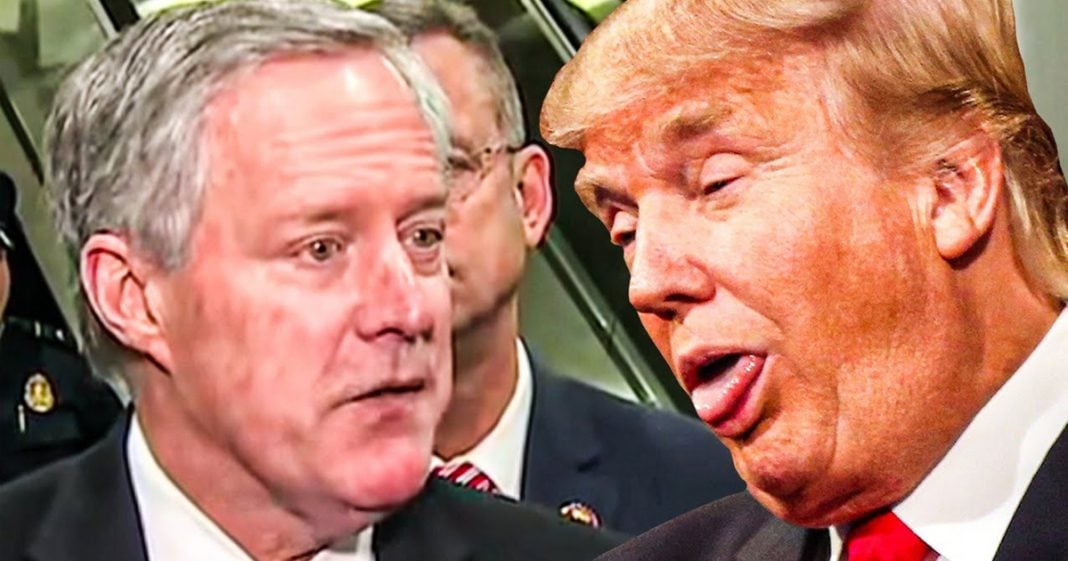 According to a new report by Politico, Donald Trump’s most recent Chief of Staff, Mark Meadows, is allegedly already ready to quit the job that he has only had for a few months. In the early days of Meadows’ tenure, it had been reported that he had been reduced to tears in front of the White House staff after he saw firsthand how dysfunctional things truly were in the White House, and Politico is reporting that things haven’t gotten much better for Meadows since then. Ring of Fire’s Farron Cousins explains what’s happening.

Mark Meadows, Donald Trump’s most recent and current chief of staff who’s been on the job by the way, for, for less than six months is already talking about leaving this administration. Now we had reported in the past, when the reports first came out, the Mark Meadows had been reduced to tears, uh, on at least one occasion, possibly more occasions in his early days in this administration. Because when he took the job, he thought it was going to be easy. He thought it was going to be a piece of cake that he was going to be able to step in, uh, where these other people, uh, rights Priebus. John Kelly, Mick Mulvaney had been before him and suddenly everything was going to fall into line. He knew, or at least thought he knew what he could do. He couldn’t any, uh, began sobbing like a infant had, uh, you know, was hungry.

See, he didn’t know what he wanted, but he knew it wasn’t this. And that’s what Mark Meadows has done. And now reports are coming out just a few months after the crying reports saying that he’s ready to go. And to be honest, can you blame the guy? Well, actually, yeah, you can. Cause Mark Meadows should have been smart enough to know what he was walking into. I mean, John Kelly, as much as I don’t like the guy and he disagreed with him politically, John, Kelly’s a tough dude. I’m not gonna, I’m not going to dispute that at all. John, Kelly’s a tough guy, right? He is like the stereotypical, like alpha, alpha male, you know, big, tough macho bravado is dude, couldn’t handle it. You know, several times as reported, almost got into fights. So he can’t handle this guy. If he, he thought, you know what to hell with this?

I can’t control them. Yeah. What the hell did you think you were going to do, Mark? You really thought you were going to be able to come in here where these three men before you had failed and suddenly you Mark frickin Meadows was gonna whip them all up into shape. Really? What’s your secret, Mark? What kind of leadership? Uh, history do you, you have that would have even been made you think for a second, that this was something you would be capable of? The answer is you had nothing. You had nothing other than your own arrogance and you’ll walked into that white house. You thought for sure. Heck yeah, this is my time to shine. I’m going to make things wonderful. And you just started crying. She couldn’t now I feel sorry for you on that front, but I really do, because I know what it’s like.

Right? You think, you know what? I can do this, this isn’t that hard. I don’t know why these other guys failed. They don’t know what I know. But then you realize, Oh crap. They did know what I knew. And they apparently knew a little more than me, which is why they’re gone. And I’m not. Whoops, Hey happens to the best of us sometimes Mark. But, but according to a new report in Politico, meadow says that, uh, he, if Donald gets reelected, he’s not staying on for more than another a year at most. It’d be lucky to make it a year. He’s had enough. He’s done. And part of the reason is because you have too many cooks. There are far too many cooks in that white house kitchen. Uh, probably both metaphorically. And literally, if we’re going to be honest about Donald Trump here, but here’s the thing.

You got your Jared Kushner, right? You got your Steve Miller’s and his creepy eyes. You got your Ivanka. You have all of these different little people, your Kelly who think they’re in charge. And so they give one order, somebody else comes along and gives a different one. Staffers are left confused. There’s a lot of fighting because of this. And this is all from the reports that we’ve gotten over the years, not just from Mark Meadows, but from everybody that’s tried to go in there and control the chaos. Nobody knows who’s in charge. Nobody that is in a position to be kind of in charge, knows what the heck they’re doing. And it’s pure anarchy. And that anarchy is reflected in the policies and the decision making process coming from that white house. It doesn’t matter how good you are, how tame you are, how much Oh you are or what rank you achieved in the military. Nobody is going to be able to walk into the Trump white house house and fix this shit show that Americans have been watching for far too long.