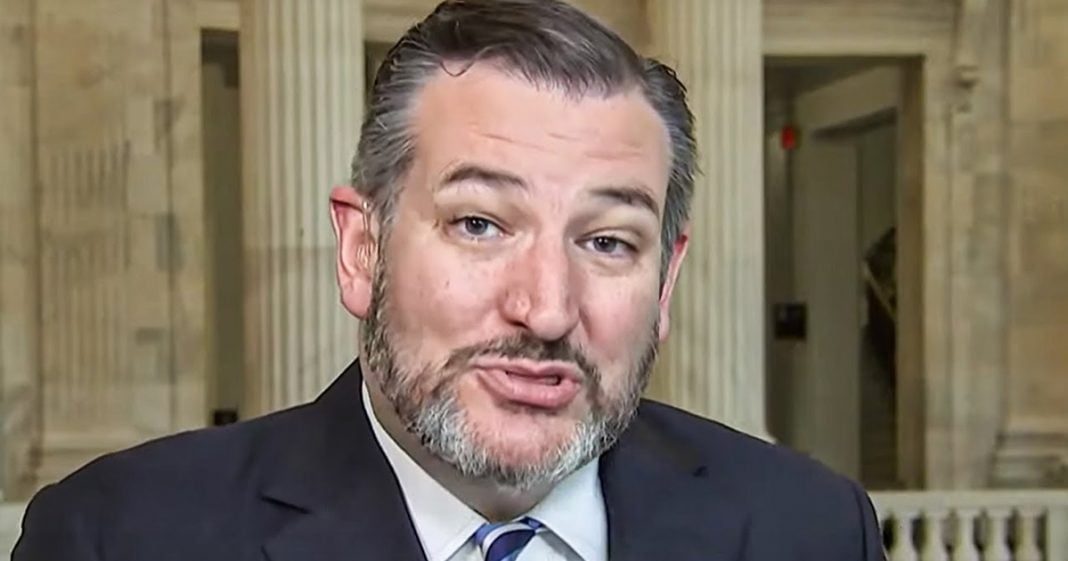 A sitting United States senator is having an online “beef” with a fast food company over their new sustainability policies. Ted Cruz is not the least bit happy with Burger King’s decision to reduce their emissions by sourcing beef from cattle on grass-fed diets. These diets have been shown to reduce methane emissions, which is a good thing no matter how you slice it. But don’t tell that to Cruz – he believes that this move by BK is a sign of the apocalypse. Ring of Fire’s Farron Cousins discusses this.

You know, it’s not often here in the United States that we actually see a corporation do the right thing. And usually when they do the right thing, it’s because they want some good publicity or because they got caught doing some really bad things and they are trying to make up for it, but either way, not something we see very often. So when we do see it, we should appreciate it at least for a moment. But don’t tell that Ted Cruz, Oh man, Ted Cruz is furious at burger King because burger King announced recently that, uh, they’re going to start sourcing a good percentage of their beef, uh, from grass fed cattle. And they’re doing that. And they explained it in the little video that they put out on Twitter. In fact, here’s, here’s what their tweets said. Their tweets said, California and burps are no laughing matter.

They release methane contributing to climate change. That’s why we’re working to change our cow’s diet by adding lemon grass, to reduce their emissions by approximately 33% learn about our ongoing study. And then it has a link to bk.com/sustainability. So they’re, they’re trying to do the right thing. And they’re trying to teach people about science. Like this is why we’re doing this. And yes, what they said in that tweet is correct. And I don’t know about the lemon grass thing, reducing methane, but it is true. You know, cattle do release lots of methane through the burps and farts and yeah. Ha ha ha. That’s funny burps and farts, but for real, that is a thing that happens right now. There is debate in this scientific community, amongst climate scientists, about how much it does contribute. Some say it contributes quite a bit. Other say it contributes a decent amount, but not quite as much as the other scientists are saying either way.

They all agree. Yes, it does contribute. There’s no question about that. Just the extent of it. Ted Cruz saw this tweet and he retweeted it with just three little words. Humanity is doomed. Humanity is doomed. Now it’s unclear if Ted Cruz was saying humanity is doomed because of the threat of climate change. If that is what you’re saying, mr. Cruz, I agree with you because we’ve seen how we handled this pandemic and we failed. So if you think we can address the issue of climate change, then yeah, you’re right. We’re fricking doomed bud. But if you think we’re doomed because a fast food restaurant is it put together a short video to teach people about science. Then there is something clinically wrong with you. That’s that’s not a reason to think that human beings have no hope. In fact, that’s a reason to think there might be a little hope for us.

If we can get more corporations, more companies out there thinking sustainability, thinking green, working to help reduce their emissions in any possible way that they can because every little bit helps. Then that’s the opposite of doomed, but not to Ted Cruz because right. He’s a big Texan. You know, he wasn’t born there. And even though his name’s not Ted, he still likes to give off the persona that he’s, you know, some Texas cowboy when he’s really Canadian. I mean, let’s be honest. You’re you’re not a Texas cowboy man. You’re barely even a citizen of the United States. You got lucky on that one because the way our laws work, but you have to go out there and act like the big, bad dude. You know, the head honcho of the OK. Corral telling us that NA Cal far tank caused no problems.

Well, let me ask you this, Ted, what do we have to lose? Right? Suppose all of that is bogus. And cow farts aren’t contributing any methane to the atmosphere, but we’re reducing their amount of farts. Show me a situation anywhere we’re having. Fewer farts is a bad thing. There’s not a situation ever where less farts is worse than more farts. It doesn’t matter if it’s cows or people or dogs, whatever it is fewer far should always be the goal. I don’t, I can’t, I’m shocked at myself that I actually have to sit here and say that. But I do because Ted Cruz is unhappy because burger King is trying to reduce their carbon footprint.