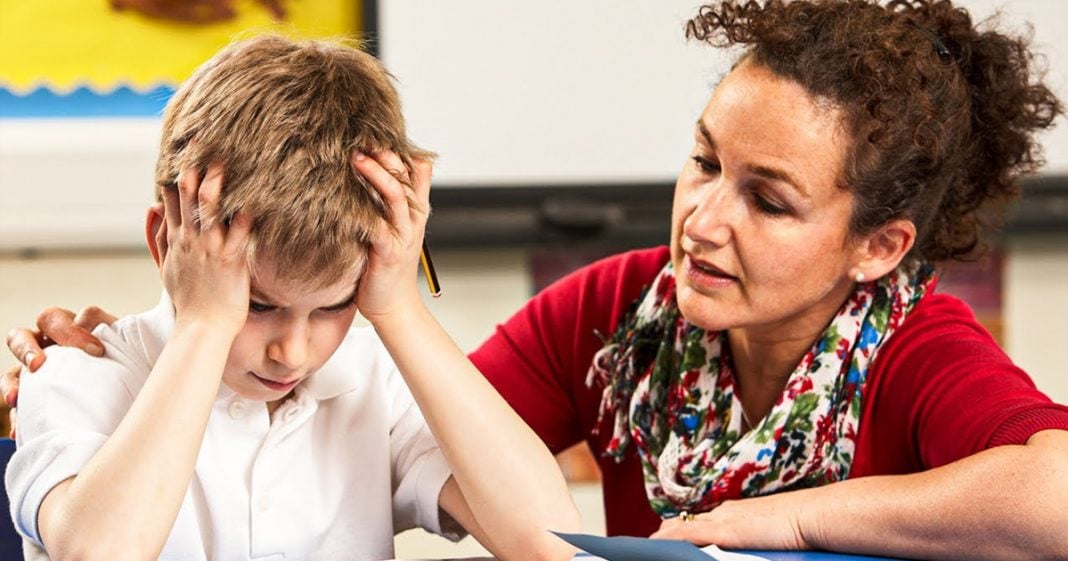 A school district in Missouri has come under fire after it was revealed that they are forcing parents to sign Covid-19 “death waivers” for student athletes. Other schools across the country have also been forcing parents to sign waivers, and reports are indicating that teachers in Texas are having to write out living wills before they go back to school. Ring of Fire’s Farron Cousins explains what’s happening.

Yesterday. It was revealed that a school district in Missouri, specifically the Hazelwood school district had sent out a letter to the parents of student athletes telling them that they needed to sign a COVID death waiver. If their kid was going to play sports for the school, here’s what this death waiver says. This is word for word from the waiver. The undersigned agrees to release discharge, hold harmless and indemnify. The Hazelwood school districts is agents, employees, officers, Boyd of board of education members, insurers, and others acting on the district’s behalf of and from any and all claims demands causes of action and or legal liabilities for injuries to, or death of my child occurring during or resulting from or participation in the above mentioned program or activity and any related in any way to COVID-19. Even if the cause damages or injuries are alleged to be the fault of, or alleged to be caused by the negligence or carelessness of the release.

Basically school district Hazelwood school district is out there sending out these letters to the parents of students, student athletes, excuse me. Good grief saying if your kid gets COVID-19 and they die, even if you can prove in court that we were so negligent that our negligence caused your kid to get infected, you can’t do anything about it. Please sign this or else. You know, little Johnny can’t be the quarterback anymore. That is what this school district is telling parents to sign. Then, after this came out more and more of these waivers started showing up. People started Tweed Mount of Ben Dickson, by the way that a phenomenal job of finding tweeting and retweeting, other people who had found these releases popping up in school districts all over the country, because that’s what they want the parents to do. You can’t Sue us if your kid dies, or if you could get sick, even if our negligence is what gets them sick and folks, this waiver is terrifying because what it tells us is that school districts know, they know that they can’t get their shit together to keep your kids safe.

If they thought for a second, that they had a shot at keeping the school clean at keeping the kids distance from one another at preventing the spread of this virus in their own school. If they thought they had enough, a hand sanitizer and soap to wash hands and face masks and gloves to go around, they may not be sending out these waivers, but they know they don’t. They know that they’re under equipped and that’s why these waivers are coming out. Of course, that’s not quite as bad as some of the reports we’re getting out in Texas, which those reports are saying that teachers who are getting ready to go back to school just a couple of weeks now, um, they’re writing their wills. They’re filling out paperwork for medical power of attorney. They’re essentially getting their affairs in order because they have good reason buying more life insurance too. They essentially believe that they could easily die this year from this disease. And yeah, it does affect adults. In fact, the older you are, the worse it gets, it does affect them more than children. That doesn’t mean that children are not affected though. Children in this country have died from this disease.

It’s not just about whether or not you live or die. Millions. Others are going to be left with permanent lung damage, permanent heart damage, neurological damage from this. So even if you survive it, your quality of life for the rest of your life is going to be decreased. But the teachers are filling out their wills. They’re buying more health insurance or life insurance. Excuse me, the parents having to sign away their legal right to Sue these school districts because they can’t keep their kids safe. Yeah. Does this paint a rosy picture for you? Does this tell you that, Hey, everything’s going to be okay if we reopened schools because it won’t be, it absolutely will not be. And some of these school districts are saying, well, Hey, it’s okay, because we’re also offering distance learning. So if you don’t want to send your kid to school, you don’t have to, okay.

Yes. That’s decent. However, you then run into a problem, several different problems, by the way. Uh, one, if you are a teacher yourself, or you have a teacher in the family, they actually are still required to go to the school every day and be around all the other teachers. And of course, all the students who couldn’t distance learn. So there goes that safety, right? Because you still have somebody that could potentially be bringing that virus home to your house every single day. I know I’m married to a teacher. That’s the fear we live in. Also have four kids that could afford different schools because their ages are staggered in such a way. So every, any given day, if my kids do go back to school in, and of course my wife goes back to school, they will be bringing home, potentially contact with up to 5,000 different individuals.