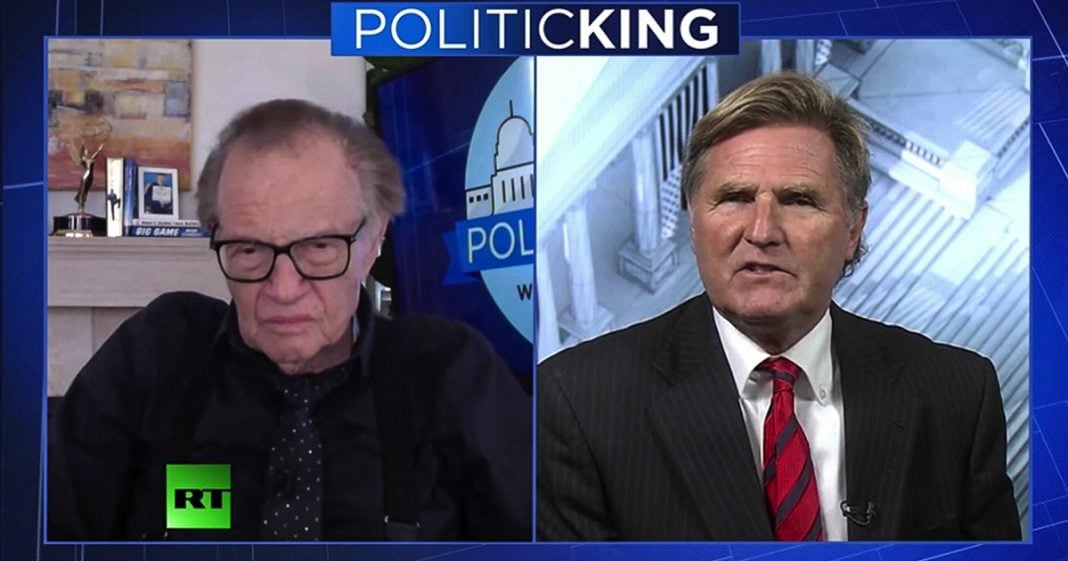 Via Politicking with Larry King: The bitter court battle over a book by Trump’s niece Mary continues. Plus, authorities have finally arrested Ghislaine Maxwell, the alleged enabler of Jeffrey Epstein. Larry King is joined by Mike Papantonio to discuss.

Mike Papantonio: There are a lot of questions swirling around about the release of Trump’s, Mary Trump’s book, and they all are going to depend on what’s actually in the, the nondisclosure agreement that she signed 20 years ago. Mary’s lawyers are arguing that the NDA is too broad in scope and, and it’s, it can’t be enforced because of that. This is an actually, it’s actually an argument that’s made by other people who have been bound by NDAs regarding Donald Trump and those cases were very successful. Her lawyers are claiming that the Trump children lied about their assets in order to secure the estate settlement.

And if they entered into an agreement on false pretenses, then the whole thing would be considered null and void. An interesting part about this, there may be what we call, and this is a guess, but there may be what we call liquidated damages involved in this. And what that means is there hasn’t, there doesn’t have to be a showing of damages. There simply has to be a showing that the contract has been violated and then that, that liquidated damage amount falls on, on Mary Trump. Most of the time, you’ll see a publishing company like Simon and Schuster say, look, we will handle liquidated damages. We think we can make enough money on this book that we’re going to go forward anyway. And any damages that ensue from there, we’ll go ahead and handle that. Daniel Ellsberg is a great example. The Daniel Ellsberg case with the Pentagon papers.

Understand those papers they were, they were published and Daniel Ellsberg was, you know, he was indicted and in the end he was not prosecuted. So the point is this, Mary Trump is at risk, Simon and Schuster is not at risk, just like in the, in Daniel Ellsberg case. Ellsberg was at risk, but the publisher was not at risk because they argued first amendment and they also argued that this notion of prior restraint on publishing or pre-publication injunction should not be considered by the court and they were successful. So I think the book comes out and I think what Mary Trump is going to have to understand is there’s ramifications that are going to flow after that.

Larry King: Alright. It’s rare that a book is stopped from publication, isn’t it?

Mike Papantonio: It’s very rare. It’s a, it’s a very fundamental first amendment, right. The court looks at yeah, there may be some issues, but the, the, the first issue we’re going to look at is are we, are we willing to enjoin a publication, especially a pre-publication and this judge has said, look, there are already thousands of these books out there. What good is it going to do anyway? I think Simon and Schuster’s in good shape. I can’t say that Mary Trump is in good shape because we haven’t had a chance to look at what that NDA is or whether there’s liquidated damages in that NDA.

Larry King: So at this point, it’s impossible to say who’s going to win on this?

Mike Papantonio: Well, I think, I think Simon and Schuster is going to win. I think the book is going to be a best seller. I think it’s going to generate a lot of money. And the only question is who wins between the Trump family and Mary Trump? As I said, Mary Trump is saying, look, the reason this thing is null and void, the reason the NDA is null and void is because there was fraud in the disclosure of assets that the Trump family came forward with. And so that’s going to be an element they’re going to argue. The, the Trump family is going to obviously argue, you can go forward with this, but your damages are going to be substantial. She simply has to take the risk. Maybe Simon, Simon and Schuster will step in to handle the damages that might result here.

Larry King: Does it make the president look good to be fighting it?

Mike Papantonio: I think it’s a big mistake. I think every time, I think every time Trump steps up and fights something like he did with Bolton or, the publications are going to continue. They, look, his base is his base. His base at 40% isn’t going to change. They’re going to stay there regardless of what he does. But I think people that aren’t in his base say, what do you have to hide? I think it’s a mistake for him to do that. He doesn’t need to do it because ultimately the person seeking that publication is going to prevail. Now, Bolton has another problem. Bolton’s issue comes down to, there’s, there’s certain, there’s certain steps that he has to take with the federal government to be able to release certain elements of what’s contained in his book. He didn’t do that. So there, there that’s it, you can’t complain, you can’t compare the Mary Trump case with what happened to Bolton.

Larry King: He was. Do you expect him to come out in, in the trial of, ms. Maxwell or she’ll turn state’s evidence, right?

Mike Papantonio: Yeah. I think this is, as the FBI mentioned, Maxwell’s been slithering around all over the globe for 12 months since her buddy Jeffrey Epstein was arrested last summer. They, they, they finally found her in New Hampshire on this palatial estate that she had purchased with cash from interestingly enough, a shell company that both Epstein and she had set up. Maxwell’s been hit with six charges, one being perjury for lying to investigators years ago. And the rest are all related to her acting as a groomer and a recruiter for these young girls that Jeffrey Epstein and his powerful friends abused over the years. An attorney, interesting part of this story, an attorney named Brad Edwards is spectacular attorney out of South Florida, has been working tirelessly on this case, and this is a big step forward for him in this fight for, for justice, for the Epstein victims.

But here’s what we know so far. Maxwell has been accused of actively seeking out these young girls all over the world in putting them in, in Epstein’s ring. She, she would, according to the indictment, this is the way the indictment reads. She acted as a groomer of, of sorts for these girls, showing them how to perform massages on Epstein and other men. Her presence in the room with the girls, Larry, seemed to put the girls at ease. If you read this, if you read this indictment and make them think that everything was okay, that what they were doing was perfectly normal. What Maxwell did to these young girls obviously is deplorable. Here’s the interesting part of the case though, Maxwell is going to say that there was, there was a non prosecution, prosecution agreement that was signed. Okay. And it was signed back when Epstein was first prosecuted. Epstein’s pals, his political pals came to his aid and worked out this nonprofit prosecution agreement in 2008.

It included a phrase that Maxwell’s lawyers are trying to use to protect her from prosecution. It said that not only would Epstein not be prosecuted, but also his co-conspirators would not be prosecuted. Maxwell wasn’t expressed, explicitly mentioned in that agreement. But it, it, it contained a phrase that I think the phrase was not limited to people that were named in the indictment. So virtually anybody, the argument is going to be made that anybody that was surrounding that indictment, anybody that was surrounding the, the first Epstein problem, that they are absolved from all this. And here’s why that argument might not work. And my guess is the argument will not work because it only pertains crimes that were committed in Florida and much like Epstein’s arrest last year, new charges emerged that weren’t related to Florida, allowing prosecutors to go after him. This is the same kind of problem that they’ve got.

So, you know, the truth is, I don’t think this effort by Maxwell has a chance because, because there’s so many problems with that non prosecution agreement. The, the judge was totally dysfunctional, absolutely dysfunctional, where it came to his job. The prosecutors were dysfunctional. They didn’t do their job. The, the, the victims in that case under Florida law should have had the right to know what was going to happen in the pleading in the, in the, in the deal that was made. They weren’t made aware of that. The law in Florida is very specific about that. The chances of her, of her winning on this little glitch, I think is almost nonexistent, but that’s what you’re going to hear about a lot that she’s been absolved of all this, because she was a, she’s protected under that non prosecution agreement.

Larry King: Mike, you’re always on the mark. It’s always great having you with us.