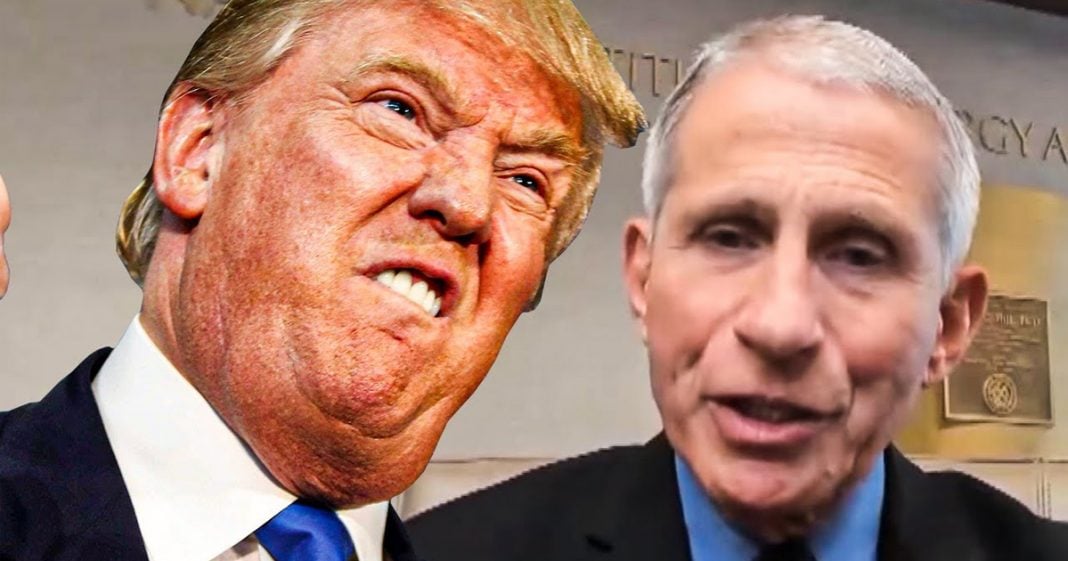 The Trump administration has gone from trying to hide Dr. Fauci from the public to actively claiming that the man is incompetent and has lied every step of the way. The reason(s) for the administration’s hatred of Fauci has to do with the fact that he is not blindly going along with the plans to reopen the economy as the infection surges across the country (and his approval rating is also killing Trump’s.) Ring of Fire’s Farron Cousins explains what’s happening.

Members of the Trump administration have actively been trying to undermine and discredit one of their own in the past few days. And that person happens to be dr. Anthony Fauci. And what’s happening right now is that Donald Trump is unhappy with the fact that Fauci is not falling in line like the rest of his administration and just blindly accepting the false hoods that Trump likes to tell on a daily basis, those false hoods being that it’s safe to reopen schools, that it’s safe to reopen the economy that maybe wearing a mask isn’t all that affect, you know, things like that felt she, on the other hand has consistently been telling us what the science tells us, telling us what we know and what we learn, but in the early days of the pandemic, yeah. The things that dr. Fauci was saying, we’re not necessarily accurate. And that’s because we didn’t have all of the data in.

Now, there were a couple times sure, by Fauci his own admission, he lied to us, but he lied to us in order to protect first responders. So while a lie is always inexcusable, you kind of have to look at this one and say, in terms of lies, you did it for a good reason, but it was still the wrong thing to do. Here’s what’s happening right now. Uh, you have the white house that is actively sending out this list of alleged false hoods that Fauci told in the early days of the pandemic. They’re actually sending this out as a list, as a media kit, to media outlets all over the country so that they start reporting on the fact that Anthony Fauci is just wrong about everything. Trump’s trade advisor, Peter Navarro, a man who we shouldn’t listen to for a fricking second about the pandemic.

He knows nothing about medicine at all. Yet. He is out there weighing in saying that Fauci has been lying to us. Everything he says actually is a lie. According to Peter Navarro, this is a direct quote, dr. Fauci has a good bedside manner with the public, but he has been wrong about every thing I have ever interacted with him on everything you’ve ever interacted with him on Peter Navarro. Every single thing felt she’s always been wrong every single time. He has never once told the truth at all. According to Peter Navarro, the man who has no training in science whatsoever, right? And we’re supposed to take your word for it. You psychopath, you’re a disgusting, disgusting human being who by the way, admitted two weeks ago, and the media didn’t pick up on this. But two weeks ago, Peter Navarro admitted that all of the trade talks with China have now fallen apart.

There are no deals in the works. He does not foresee any deals on the trade war in the near future. And the trade war is still going on. And that’s him. Peter Navarro is the failure at every turn. As I mentioned, Fauci has admitted. He lied and he told us why he did it. He lied about the mass because the mass were needed by the first responders. And they couldn’t find him. You know, they were at a PPE, which we’re now once again, running out of PB. And, uh, so that’s why he did it. It was a stupid thing to do. It was irresponsible, but he admits that he was wrong. And in the earlier days of this, we didn’t know a whole hell of a lot about how infectious it was. We didn’t know who was most susceptible. You know, the data coming out of other countries has not necessarily mirrored the data coming out of the United States here, right?

We are seeing more people die from it here. We unfortunately, especially compared to Europe, have more people with more preexisting conditions and we have different preexisting conditions than you might necessarily find. In Europe. We have higher rates of obesity. That seems to be a big factor in this higher rates of diabetes. That seems to be a higher, a bigger factor, excuse me, in the death rates here too. You don’t see as much of that over in Europe. So Fauci could not have accurately predicted that because we didn’t know it was a brand new strain of SARS that had not yet hit this country. We didn’t know how it was going to interact with our people, with our preexisting conditions and with our crappy healthcare system here in the United States, it’s a whole different ball game. Fauci had to based his early assumptions of what we saw in other countries, not realizing how screwed up we truly are here in America. Fauci is not perfect by any stretch of the imagination, but in terms of every single human in this Trump administration, Fauci is leaps and bounds above the rest of them in terms of being a decent human who does at least attempt to most of the time, tell the truth.