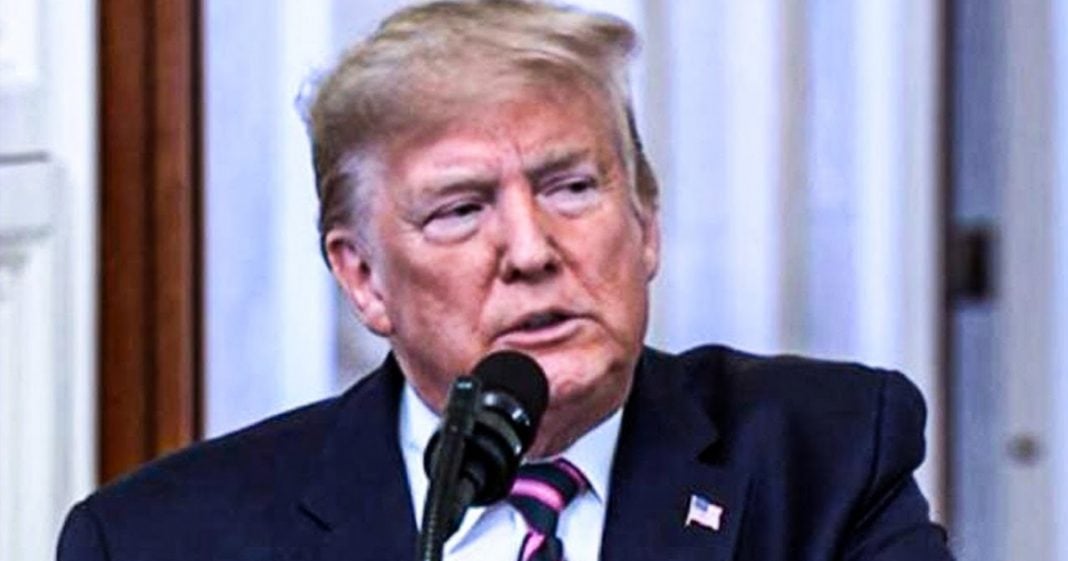 Donald Trump told his 20,000th lie on July 9th, and after doing the quick math, this adds up to one lie roughly every hour and a half since the President was sworn into office. This is unprecedented, and it shows just how disgusting this man really can be, especially because about half of these lies have been completely pointless. Ring of Fire’s Farron Cousins discusses this.

According to the fact checkers at the Washington post, uh, as of July 9th. So last week, Donald Trump has told 20,000 lies since the moment he was sworn in on January 20th, 2017, 20,000 lies through July 9th, three and a half years to hit that Mark. Now here’s the thing, Washington post defines these, not just as quote lies, but lies, falsehoods and other unverified claims, which unverified claims by the way is just a fancy way of saying he’s lying. Uh, like for example, uh, and this is actually one of those unverified claims that he said after he hit the 20,000, uh, but that he, he plays golf super fast. He’s one of the fastest golfers out there. Whereas Obama was a very slow golfer. Um, that’s an unverified claim, but it’s a lie. It’s something that dude just made up. That’s a lie. He intentionally tried to mislead people. And in the real world, we’re going to go ahead and call that a lie, because that is exactly what it is.

But anyway, let’s do some math, right? That’s always fun. July 9th was Donald Trump’s 1267th day in office. And that was the day he told his 20,000 fly. Um, actually told it on Sean Hannity’s program, by the way, they did a telephone interview. So let’s do this. We have 20,000 lies, 20,000 lies spread across 1,267 days. So 20,000 divided by 1,267. And we’re going to get 15.7 lies. So 15.78 lies is how many lies the man tells per day. So if we have 15.7, eight lies per day, which we’re going to go ahead and actually round down to 15.7 spread over 24 hours. So over 24 hours, he is telling 15.7 lies. He is lying every hour and a half, which means every 90 minutes since the man was sworn in as president of the United States, he’s told a lie on average, that doesn’t actually mean that every 90 minutes, he’s just telling a lie like clockwork, but it means that he is told so many that if you average it out, since the second he was sworn in as president of the United States, every 90 minutes, a new lie, well, not necessarily a new lie because some of the lies are lies that he just tells over and over and over and over and over again.

For example, he is told the lie that the economy has never been better than it currently is, especially for African Americans. That is a lie. He has actually told a couple hundred times since being sworn in, he has repeatedly lied about his crowd being bigger than Obama’s crowded inauguration. He has repeatedly lied about the number of people who allegedly illegally voted in 2016, which cost him the popular vote. Uh, he lies about the stock market being, you know, better than it’s ever been climbing higher than it’s ever climbed climbing faster than it’s ever climbed. Not true. The man is telling lie after lie, after lie, after lie. And some of those, like I mentioned, those are lies that he doesn’t even need to tell, like we understand politicians lie left, right? Doesn’t matter. You all lie, you do it. And you do it to make yourself look better to help your reelection chances.

But then there’s some lies that need not be told at all. For example, the crowd size lie, that was stupid. That served no purpose whatsoever. Other than to inflate your own personal ego, that doesn’t affect your reelection. Chances that doesn’t make you look better or worse. You could’ve said nothing about it. Nobody would have really paid attention. You made an issue of it. And now here we are three and a half years later, and it’s still alive. Cause it makes you look stupid. And we now know it gets under your skin, but the man has a problem. Hey, this isn’t just about, wow. He’s told a lot of lies. It’s about the problem, the psychological problem with this man. He is a pathological liar. He has a need to tell lies. He has a compulsion to tell lies. That’s where the danger is and that’s what needs to be addressed. And that is just one of the many reasons why this man needs to get out of office as soon as possible.