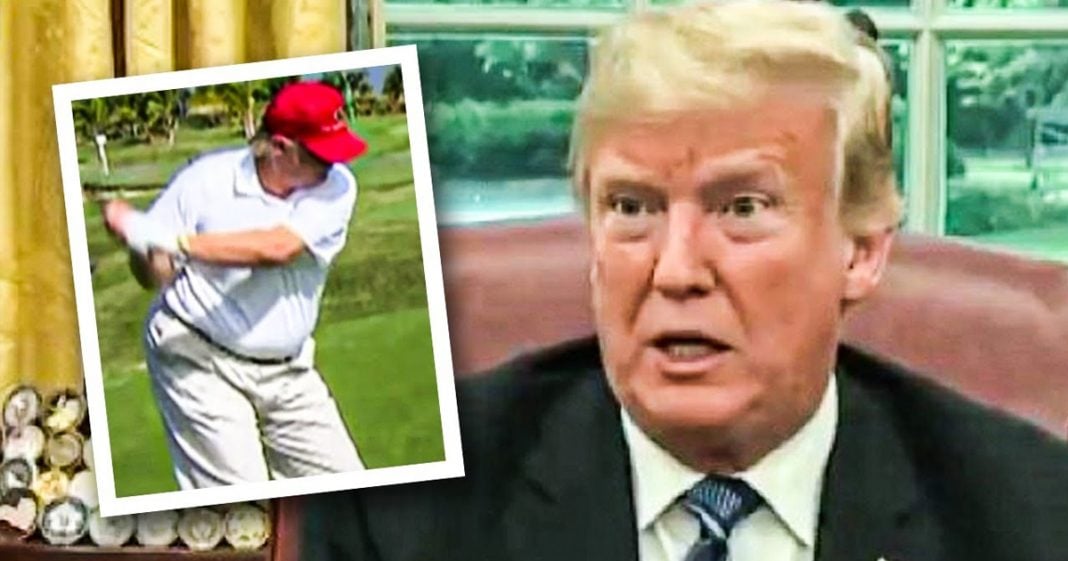 The media once again reported on Trump’s seemingly nonstop golf outings this weekend, but this time the President decided to fire back at the media. He claimed during a Twitter tantrum that lots of people play golf and that he plays really quick and that he’s still played less than Obama did. The meltdown sounded incredibly infantile, but that’s just par for the course with this President, as Ring of Fire’s Farron Cousins explains.

Donald Trump was furious over the weekend as members of the press. Once again, got pictures of him out there playing golf as he loves to do. But this time Donald Trump just didn’t sit by and suffer in silence. Nope. He took to Twitter, had another one of his, a at this point almost trademark tantrums where he defended his nonstop golfing in one of the wildest ways possible. Here is what Donald Trump had to say in a multi-part tweet. I know many in business in politics that work out in this league, in some cases to a point of exhaustion, it is their number one passion in life, but nobody complains. My exercise in quotes is playing almost never. During the week, a quick round of golf, Obama played more and much longer rounds. No problem. When I play fake news, CNN and others park themselves anywhere they can to get a picture, then scream. President Trump is playing golf. Actually I play very fast, get a lot of work done on the golf course and also get a tiny bit of exercise. Not bad.

All right. Lots to unpack. Right? Lots of lies in that a very, very, very bizarre tweet. So let’s, let’s start in some places, some cases to a point of exhaustion talking about other politicians, literally just working themselves out to where they can’t even function anymore. Um, who seriously show me? Who can you show me any elected official? That’s just like super ripped walking into Congress every day. Just exhausted from, you know, pounding in at the gym for six straight hours. Hey, we’ve seen workouts obviously, you know, from, from certain lawmakers, actually most of them, female, uh, Tulsa Gabbard used to post her workouts. Tammy Duckworth has, uh, posted her workouts a lot from a lot of the dudes. And you look at most of them. Yeah. They’re they’re not hitting the gym and certainly not to the point of exhaustion.

Oh, okay. A played more and much longer rounds. No problem. No problem. Really. Fox news talked about his golfing nonstop you by the way, talk to you about his golfing nonstop because it was a problem. Y’all had a big problem with it. You didn’t like it. You thought he was so lazy, but instead he was, you know, it could have been working, but instead he’s out playing golf, you did call him out for that. So did Fox repeatedly, Sean Hannity loved to cover that on his show. But ironically, now that it’s you doing it, they don’t talk about it anymore. And now that it’s you doing it, you think it’s okay. Even though you’re also wrong about you going out and playing fewer rounds of golf than, than Obama did at this point in his presidency, Obama had played 98 rounds of golf. And at this point in his presidency, Donald Trump has played 248 rounds of golf for a difference of 150 more rounds of golf.

Donald Trump has played in three and a half years than Obama did in all of eight years. Obama did play 333 rounds of golf. So if you compare Trump’s three and a half years to Obama’s eighth ensure Obama’s played a little bit more, but dude, you’re about to catch up with him. You’re going to catch up with him. And Obama never had to deal with some of the things that you’re going through. Like, you know, four or five months at this point of a global pandemic that you’re just fricking ignoring because you want to go out and play golf. Now, ironically here, folks, Lindsay Graham did go out there on Twitter and defended the president. He said, man, I know mr. Trump. And he plays super fast and he does lots of work out there. Tons of it. I just love it. Him to death. I’m not implying anything about Lindsey Graham.

It’s just, he is out there absolutely kissing the president’s ass for literally no reason. Lindsay that’s, what’s so weird about this. Like you don’t gain anything from adding your voice to this. You don’t lose anything from just shutting the hell up and not chiming in about how bad-ass and godlike Donald Trump is. You could have literally said nothing, but instead you had to go out there and act like the little, uh, little dude that followed guessed on around in beauty and the beast. That’s what you are to Donald Trump. Lifou I think his name is, um, so yeah, that’s what you are, Lindsay, because you didn’t have to say anything, but you inserted yourself offend to this just to kind of, uh, fluff Trump’s ego a little bit there, but here’s the thing. Folks, Donald Trump is not working on the golf course. We have seen him golfing.

We’ve seen videos. We have seen tapes. He is not out there, you know, kicking ideas around in his head. He is out there to forget about the war and just relax. Even though he has one of the most relaxing lifestyles as a president than anyone in history, he should be working. He should be out there making decisions, listening to people, reading things. But instead he chooses to take his self out to the golf course, play a few rounds and not have to worry that the weight and fate of this country is resting on his shoulders.