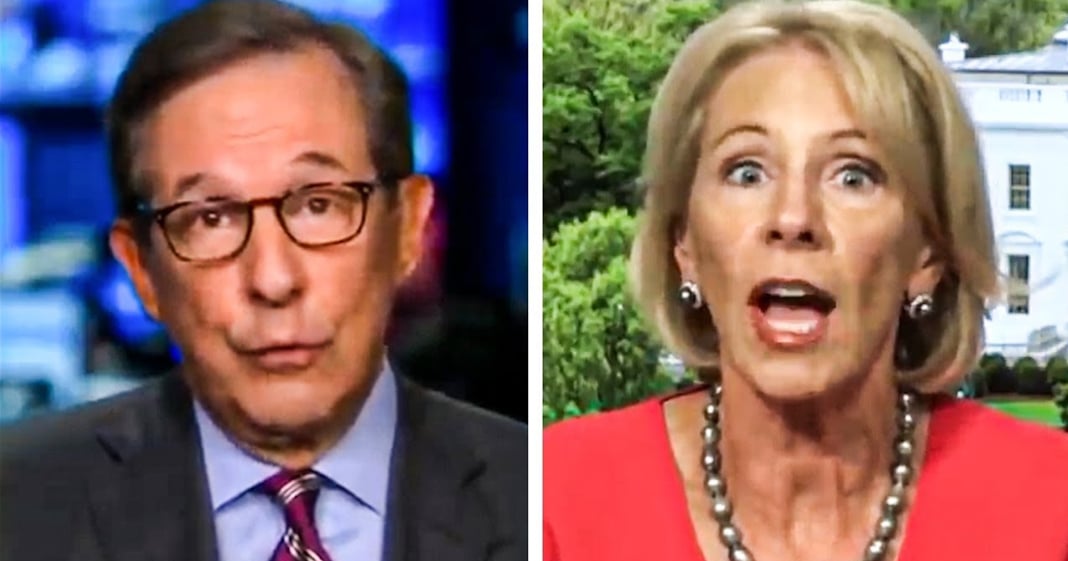 Fox News host Chris Wallace didn’t mince words with Education Secretary Betsy DeVos over the weekend when he told her that her plan to withhold funding from schools that don’t open in the fall was illegal, a claim that DeVos was not happy with. But Wallace is correct – the money has been allocated and DeVos cannot withhold it because she does not have that authority. Ring of Fire’s Farron Cousins explains what’s happening.

Over the weekend, Betsy DeVos, the secretary of education decided to make the rounds in the media and try to make the case that her and Trump were pushing that if your school doesn’t reopen, uh, starting next month, actually, then they’re going to cut your funding. And she thought she would start off easy by going on Fox news and talking to Chris Wallace. Now, Chris Wallace, by the way, yes, he’s on Fox news. And yeah, he has said some a and done some, you know, pretty Republican things over the years. But overall, right now he seems to be the most fair person on that network. And occasionally like he did yesterday with Betsy DeVos, he is willing to put partisanship aside and ask Republicans tough questions and call them out on their BS, which is exactly what he did with Betsy Davos. Here’s the clip. I have one last question, secretary DeVos, because both you and the president have threatened to cut off funding for school systems that don’t open fully in the fall. Here you are

The schools aren’t going to reopen again. That’s, you know, breaking that promise. And so why should they receive funds for something they’re not going to do? And president Trump tweeted Friday, schools must be open in the fall, if not open. Why would the federal government give funding it? Won’t I two quick questions that I need a quick answer. If I can, from you secretary DeVos, one under what authority are you and the president kind of unilaterally cut off funding. The funding, the it’s been approved for Congress from Congress, and most of the money goes to disadvantaged students or students with disabilities. And secondly, isn’t cutting off funding exactly the wrong answer. Don’t you want to spend more money to make schools safer, whether it’s with, with plastic shields or, uh, health checks, various other systems, it doesn’t make more sense to increase funding for schools that where it’s on the safe rather than cut off funding

Look, American investment in education is a promise to students and their families. If schools aren’t going to reopen and not fulfill that promise, they shouldn’t get the funds. Then give it to the families to decide to go to a school that is going to meet that promise. I mean, I know, I know you guys, and I know you’ll support vouchers and that’s, and that’s a reasonable argument, but you can’t do that unilaterally. You have to do that through Congress now to go ahead and set the record straight right now. Yes, Chris Wallace is 100% correct. Neither Betsy DeVos, nor Donald Trump have the authority to cut funding for any schools in this country. The power of the purse lies with Congress. Once Congress passes their budget and they allocate money to whatever it is, they allocate it to that’s where it has to go. I mean, you’ll, we just had an impeachment over, literally that same exact scenario. Congress allocated money to Ukraine. Donald Trump said, Hey, I’m going to withhold it. If you don’t do what I want, boom, he gets impeached, right? Because he also wanted them to go after Biden. And that’s why Democrats decided to impeach.

But that’s neither here nor there Congress appropriates the money. Trump can’t do anything to stop it, but he’s doing the exact same thing right now. He is telling schools, if you do not do what I want you to do, you don’t get this money. That’s illegal. Betsy. The boss has even less authority to do that, but she’s out there saying it. I’m not going to give you their money. All right. Well, thanks for the sentiment, Betsy, but you, you actually do not have the authority whatsoever to do that. So yes, as Wallace points out what these two individuals are doing right now is 100% illegal. Furthermore, the federal government only provides 10%, 10% of the money for school budgets across the country. The rest of it comes from state local taxes. You know, when you pay your mortgage payment or your, your property taxes every year, um, and it goes to schools, not all of it, but some of it know your local sales tax goes to schools, your local gas tax, your state gas tax that also helps to pay for these types of things.

Only 10% nationally is coming from the federal government. But here’s the kicker. I also agree with Wallace, just a weird thing to say, but I also Cree with him on the fact that if you want them to go back to school so bad, why aren’t you doing anything to protect them? We have people that are going out there and working in restaurants, which people, by the way, still shouldn’t be going to, but you are wearing their gloves, their face shields and their masks, protective eyewear. If they have it, it’ll look like they’re about to go, uh, work on a nuclear reactor, but they’re just taking people’s orders for cheeseburgers. That’s how dangerous this is right now. And you’re going to send our kids and our teachers and our administrators to school. Without any of that, you don’t have a plan for it. You know, hand sanitizer, by the way, is one of the things that is always on the list of school supplies every single year, that is still hard to come by. So our, by the way, disinfecting wipes, because teachers have a hard enough time keeping things clean and sanitary as it is now, we’re going to put the weight of a pandemic on their shoulders because that’s what this is folks. That is what this is doing. It is Donald Trump. It is Betsy DeVos, passing the buck onto already stressed out underpaid and under-appreciated teachers. That’s what this is.

They want the teachers to be the ones that way, when there is an outbreak, they can say, well, were you sanitizing your classroom every night where you stay in there for an extra two or three hours unpaid to scrub everything. Well, then it’s your fault. Isn’t it? I’m sorry. Your school district didn’t have enough money to bring in professional cleaning crews. Maybe you could have just come in on a Saturday and Sunday and wiped everything down with soap and water. At the very least, that’s the kind of crap we’re gearing up to start hearing in about a month. I know schools in my area, the school, my wife works at the district. I’m in where my kids go to school. School starts back in under a month. And we’re here in Florida where we just had 15,300 new coronavirus cases yesterday. And they want us to send our kids back to school and under a month, they’re insane. But Betsy DeVos has interviews this past weekend proved it. She doesn’t know what she’s doing. She doesn’t know what the law is. And she clearly doesn’t care if she breaks the law in order to keep Donald Trump happy.