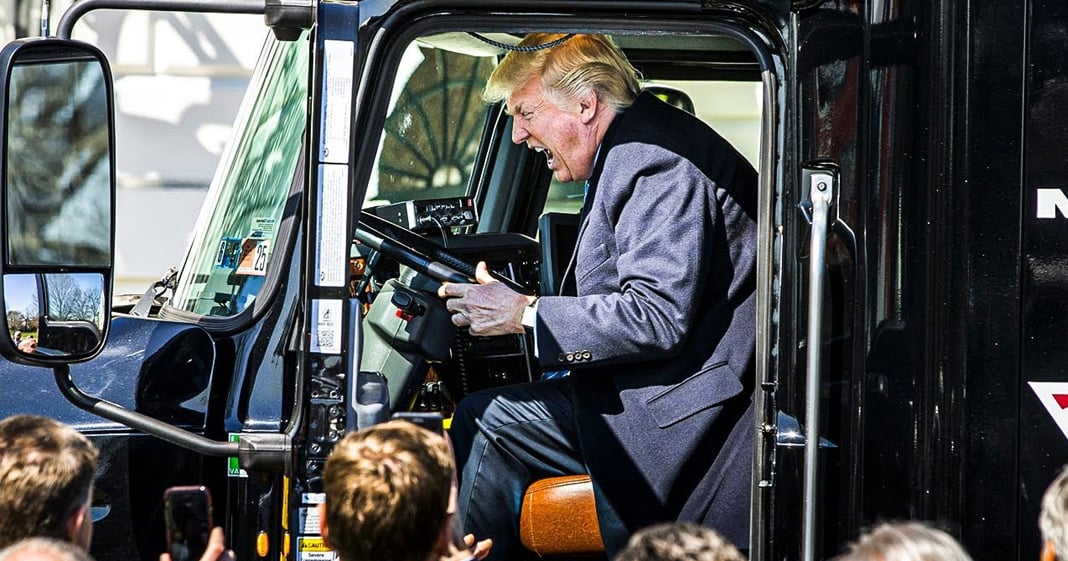 According to a new report by The Washington Post, aides for the President, including Hope Hicks, were hoping to improve his mood in the early days of the pandemic, so they decided to bring in a bunch of big trucks to the White House. This is what a parent of a small child would do, and it is beyond terrifying that the same thing that can improve the mood of a 2-year-old can work on the President of the United States. Ring of Fire’s Farron Cousins discusses this.

According to a recent report by the Washington post, Donald Trump as has been pretty obvious. I’m in a bad mood, uh, for the last few months. Really? In fact, he’s not just been in a cranky mood. He’s, he’s been a little depressed according to people inside the white house. So all the way back in April, back when we were in the really early days of this pandemic, you know, everything had just shut down. The economy was tanking. Stock market was going down the toilet and Trump, uh, was sad about that. So white house advisors, uh, hope Hicks. And Dan Scavino came up with an idea to cheer up president after all, nobody wants to work for a guy who was walking around moping and depressed and angry all day. Right? You want to cheer up your boss. You want to make them feel good. You want to make them feel like people actually care.

So hope Hicks. And Dan Scavino came up with a plan to, Hey, if we want to make him happy, why don’t we just bring in some big trucks for him to play with here at the white house? So on April 16th, they brought in a fleet of 18 wheelers as part of their, a trucker appreciation event. So Donald Trump could, you know, walk around the trucks, get up in the cabs, you know, sit there pretending like he was driving like he did with the trucks that had come to the white house previously. Cause apparently this is how you chair a cheer up. Donald Trump. He’s in a bad mood. He let him go sit in a big truck. You know, he’s not happy. He let him play with a semi he’s in bad mood. You let him get up at a ups truck and act like he’s driving.

You know, that that’s, that’s what he wants to do. And we know that because that is what little kids like to do too. Right? People who haven’t really passed the developmental stage of, you know, four to eight years old ish, somewhere in that range, probably. And I say that because at the daycare my son goes to or went to, uh, prior to the pandemic, um, every couple of months the fire truck would come and the kids would get to go and they’d get to climb all over the fire truck and they can sit in the cab and he to sit behind the wheel and pretend like they’re driving. They got pictures of them. It was a great event. The kids loved it because that’s what little tiny kids love. But apparently Trump does too. Now I don’t know about you, but I don’t want a president who gets calmed down the same way that you would calm down, uh, an adolescent or a toddler.

Even. I want somebody who’s a little bit more mature than that. I want somebody who actually knows how to handle their own emotions. It doesn’t have to rely on other people coming up with ideas to bring in outside forces, to help you be able to regulate a little better. I would think the president and I would think the people would want the president to have a little bit more self control and self awareness right there. You’re supposed to be better than the rest of us. You really, and truly are. I know it hasn’t been that way, at least in my lifetime, but, but in theory, in theory, the president’s pushed me the best. I don’t know that the president ever has been throughout American history. But again, that was the idea that the people got to choose somebody who was better than the rest of them. You have somebody to extol the virtues that we all wished we had, But instead we have a giant Man-child who throws tantrums constantly, and it can only be cheered up if they bring in some super big trucks to the white house for him to play with.