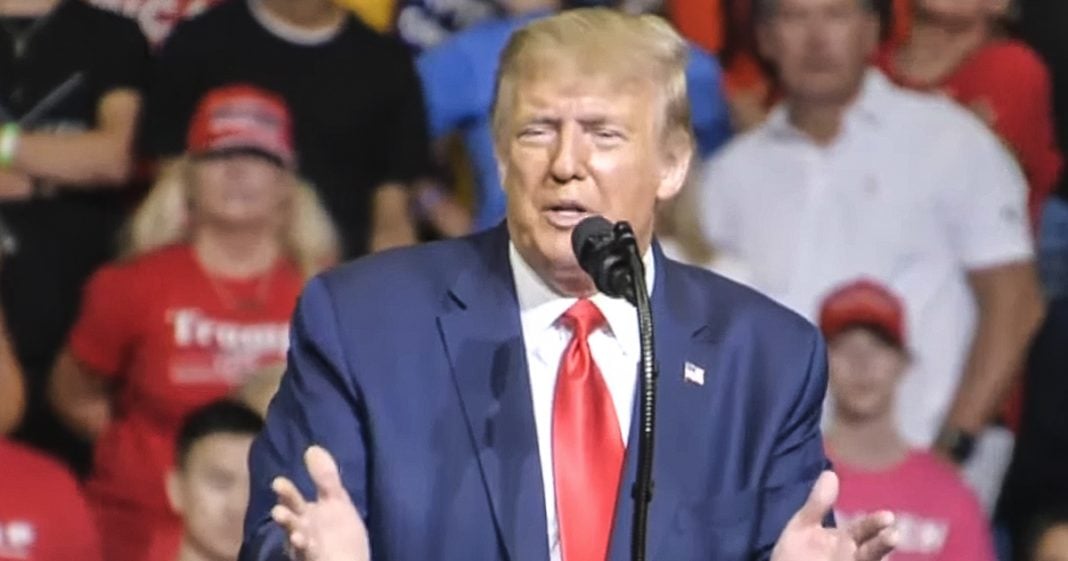 A spike this week in new Covid-19 cases in Tulsa, Oklahoma can be attributed to Donald Trump’s recent non-masked rally in the city less than two weeks ago. This was an easily predictable outcome, but it proves once again that the President doesn’t care whose life he has to destroy in order to either hold onto his power or to attain new powers. Ring of Fire’s Farron Cousins discusses this.

In what could only be described as quite possibly the most predictable news story in the history of news, uh, Tulsa city County health department director, Bruce dart admitted this week at a press conference that, uh, yes, Donald Trump’s Tulsa rally has likely contributed to the spike in COVID-19 cases that they are now seeing in Tulsa, Oklahoma, every single person, aside from Donald Trump already admitted that this was what was going to happen before the president came and did his rally and Tulsa, you know, luckily, uh, only about 6,000 people showed up to this rally instead of the 1 million that the Trump reelection campaign had predicted, uh, you know, it was a very embarrassing event for them. They had this take down the outdoor a little stage that they had built because they thought there was gonna be such a massive overflow crowd. They needed this extra stage.

Trump was going to do two speeches, essentially two different rallies. And then, uh, nobody showed up. They got played. Uh, they had a bunch of people with no intention of showing up who requested the tickets and good on them, by the way. I don’t know if I’ve said that, but good on all those people, the tic talkers and whoever it was that ordered tickets with no intention of going, thank you for your service to the United States. You helped prevent more people from getting sick. You actually did do a very good and nice public service because again, as mr. Bruce dart is telling us, yeah, that event has helped spike COVID-19 cases here in Tulsa.

Here’s the bottom line again, totally predictable. We absolutely knew that this was going to happen. Um, but Bruce dark, by the way, is unable to say with certainty that it was because of Trump because he is not allowed to release any of the tracing information. They have it, they have the tracking information. They know where the people went, where they came from, where they’d been, where they likely contracted it. But, uh, Tulsa is not letting them release it publicly. So he can only say that it’s likely that the Trump rally did this. He knows for certain that it did, he has the data to back it up, but they’re not letting him release the data. Cause you know, that might hurt Donald Trump. And then suddenly this little bitty health department over in Tulsa, going to get accused of being all political being anti-Trump no science is not pro or anti anti political party science, a science.

If it goes against a political party, then that’s the political party’s problem. Not the office that releases it. But I understand I get it. Tulsa is Trump town, right? It’s a red state, Oklahoma. And you don’t want to be seen as not blindly supporting the president. So you’re suppressing science, potentially getting even more people infected because you don’t want to make Donald Trump upset. I get it. I totally get it. I disagree with it. And I wish nothing but horrible things on you for doing it, but I get it. Here’s the thing, folks, Donald Trump knew this was going to happen. He didn’t admit it publicly, but he knew this was gonna happen. And he didn’t care because he doesn’t care about any other human being on this planet. Unless your name is Donald Trump. The only, not even Donald Trump jr. This man doesn’t care about you. He doesn’t care if you live or die, you are a tool for him, a tool, which he will use to his own end and then discard you.