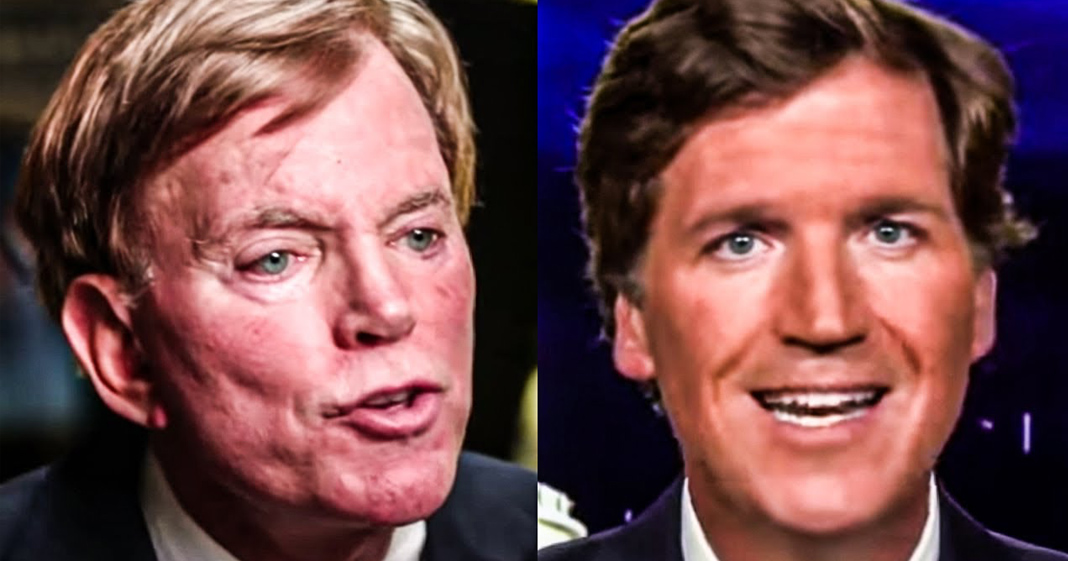 The former leader of the largest organized hate group in the United States, David Duke, has once again endorsed Donald Trump for President. But this endorsement also came with a recommendation: Duke would like to see Trump dump Vice President Mike Pence and replace him with Fox News host Tucker Carlson. This should put to rest any doubt among conservatives that Carlson is little more than a white nationalist parading as a cable news host. Ring of Fire’s Farron Cousins discusses this.

Former KKK leader, David Duke. Once again, re-emerged from whatever rock he’s been living under to once again, endorsed Donald Trump for president. Now, this is nothing shocking. He did endorse Donald Trump in 2016. But what is different this time is that even though he is endorsing Donald Trump, David Duke appears to not be endorsing Mike Pence, as vice-president, as he has another suggestion as to who Trump should pick to be his vice president. And that person is Tucker Carlson. You know, Tucker, I’m going to go full racist Carlson, who does, by the way, happen to be the highest, uh, viewed person in cable news history at this point. But he has been no stranger to saying openly racist things. In fact, in the past David Duke, again, former leader of the KKK in the past, David Duke actually called Tucker Carlson a hero. He has repeatedly praised Tucker Carlson for his use of white nationalist rhetoric for his use of white nationalists talking points.

And now Tucker Carlson is being rewarded for his racism with a hearty endorsement from David Duke to be Donald Trump’s running mate in 2020. Here’s some of the tweets that David Duke sent out Wednesday night and I’m shocked. They even allow this guy to be on Twitter. Trump and Tucker is the only way to stop the Cami Bolsheviks. It is the only path to beat them. Trump Tucker 2020 is the hashtag, uh, one more thing about Tucker mr. President, it would make you impeachment proof and Tucker would whip those Republican cucks in line and make them defend our freedom of speech and the heritage of the American people. Now, it’s interesting that he used the word heritage of the American people, because that’s what Tucker’s been saying recently, at least several times this week, the heritage, we have to protect our culture and our heritage. That’s why we can’t let these racist statues be torn down.

We have to protect our heritage. Tucker Carlson knows exactly what he’s doing. He is getting people like David Duke riled up, and he’s gaining their support to the point where the former leader of the KKK thinks you should be the person running the country. That’s what David Duke wants. I mean, we know Trump also same thing because of his hard line stance against any dark skinned person, whether they’re coming up from the Mexican border, whether they’re coming over from, uh, those countries, Trump has banned people from the ones that he calls, quote, shithole countries. Yeah. We know what Trump thinks about non white. We know what Tucker Carlson thinks about them. And now folks, there is no more excuses from the right on this earlier this week, by the way, on Twitter, addressing, you know, all the racism we’ve seen from Tucker Carlson. I made the comment that by the end of the week, Tucker Carlson is going to be doing his show while wearing a white hood.

Cause that’s how racist he was getting. You might as well put on full a KKK yet at that point, somebody commented a right winger, uh, who said, Oh, so I guess just everybody who doesn’t agree with you is just a racist. Now I’m so sick of this. That is the exact quote, by the way. Um, I ended up blocking him cause I, I hate arguing with these people at this point, cause there’s no use to it cause they’re not smart enough, but there’s no question. I’m not calling Tucker Carlson a racist because he disagrees with me. I’m calling him a racist because the racist think that he’s a racist. You know, when David Duke says, hell yeah, this guy believes the same thing as me. That’s all the evidence. I need to be able to call somebody a freaking racist. And that is exactly what Tucker Carlson is because if he wasn’t David Duke, wouldn’t be out there saying that he should be Donald Trump’s running mate.