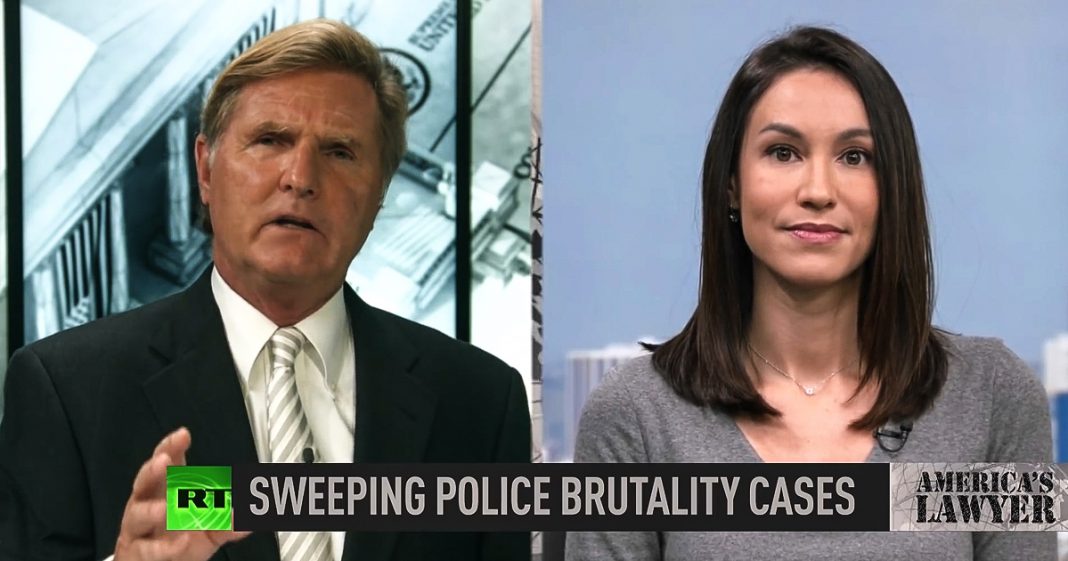 Mike Papantonio: Victims of police abuse have filed several class action lawsuits against police across the nation for violating their constitutional rights. RT’s Brigida Santos joins me now to talk about this. Brigida, actually there are lawsuits flying both ways. And I think it’s interesting. Some of these folks that believe that, you know, they’ve gotten away with burning down a building or whatever, they’re, they were on camera and the police now are pursuing them. They’re finding them on eBay. They’re, they’re searching for them on eBay. They’re going after them with film footage. So it’s, it’s this thing’s going to pick up. How many class action lawsuits are there so far and what are the crimes that the plaintiffs are seeking justice for, I suppose?

Mike Papantonio: Okay. So what you’re going to see in the defense what’s, it’s already lining itself up. These folks believe that the best way to handle these cases is to go after the people that they’re trying to say, did something wrong. They’re actually searching on eBay to see if somebody, if there was any kind of looting going on. Was an item, did it show up on eBay, trace that back to the person who has possession of it. They’re taking film footage of people that were actually planted in the protest to take films so the police could now follow these folks, find them. And I think what you’re going to see based on what I’m seeing very early on, early on, is this vengeance that’s taken place from the police department to, to try to push back on this very thing you’re talking about. In response to widespread state sanctioned police violence, Colorado, they passed a comprehensive police reform bill. What are some of the highlights of that bill, Brigida?

Brigida Santos: Senate Bill 217 has now passed in the Colorado general assembly. Now the comprehensive reforms include requiring every officer in the state with a few exceptions to wear body cameras and activate them when responding to calls. Police who break the law could face criminal liability. It also bans choke holds and under the new law officers are required to intervene to stop other offers, officers from using excessive force, or they could face misdemeanor or criminal charges themselves. Officers who are convicted of inappropriate use of force will permanently lose board certification and be listed in a public database. But some of these reforms are a bigger deal than others because police abuse is often captured on body cameras and we don’t see justice for those crimes.

For example, choke holds are banned in New York, but that didn’t stop officer Daniel Pantaleo from killing Eric Garner with an illegal choke-hold. So for me, the biggest police reform in Colorado is the state’s decision to remove the qualified immunity defense for law enforcement officers. This is going to allow victims of police abuse to file civil rights cases against officers in court. And Colorado is now the first state in the country to stop shielding police from nearly all accountability in misconduct and murder cases, and hopefully other States follow suit.

Mike Papantonio: Brigida, let me tell you about another interesting development. Right before the Supreme Court right now, there’s a coup, there’s a case it’s called, it’s called McKesson V Doe. And, and, and so what the case is about is to go, to go after the people who organized or had any part of organizing the protest, where there was loss of life or where there was property damage. For example, they’re using that the, the whole idea is to use that to go after these very people who were saying, hey, you’ve, you violated our constitutional rights. And they’re saying the people who organized it are going to be responsible for personal injury cases, death cases, property damage. And they are, this case, my prediction is that it is going to be affirmed by the Supreme Court. So that’s a whole new development. But let me close with this. I got about 30 seconds. Not all States are tackling police brutality as the same way in Colorado. What’s happening in New York?

Brigida Santos: Well, because of the COVID-19 pandemic, the civilian complaint review board is holding video hearings for police misconduct investigations, but police unions are urging NYPD officers not to show up for those video hearings. Arguing that board members should not be allowed or board members shouldn’t be allowed to work remotely if officers have to physically go to work during the pandemic. So basically police unions are using the pandemic as an excuse to postpone investigations and the police department says that it’s not going to discipline officers who skip those video hearings. And some of the officers that are being summoned include one that was seen on camera during the George Floyd protests, allegedly flashing a white supremacist hand sign.