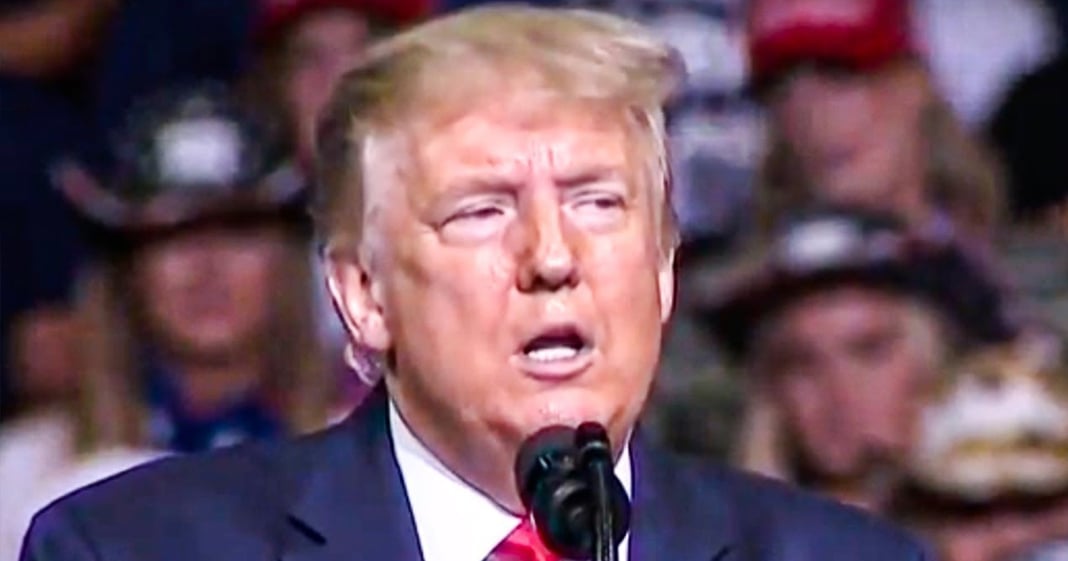 During an interview with Sean Hannity on Thursday evening, Donald Trump bragged about the fact that doctors were “surprised” that he was able to pass a cognitive exam “recently.” The truth is that the exam wasn’t recent and it wasn’t comprehensive, and this particular test doesn’t determine whether or not a mental illness is present. Ring of Fire’s Farron Cousins dissects Trump’s bizarre claims.

Yesterday evening, Donald Trump called in as a guest to Sean Hannity’s Fox news program. And he, and Hannity began talking about cognitive tests because, uh, Joe Biden had made the claim earlier in the day that he takes cognitive tests all the time. Uh, you know, almost like it’s past time, he’d just taking them all the time. And, uh, Trump insisted that no, what Joe Biden meant was he’s taking COVID tests all the time, which unfortunately, too, to give credit to Trump, that that is probably, you know, what, what he means he’s taking COVID test all the time. If you have to take cognitive tests all the time, I think that’s a pretty good indicator that something’s wrong. Nevertheless, Trump then went on this absurd little rant about how awesome he is at cognitive tests and how shocked all the doctors were that he didn’t fail them. He bragged about that. Here’s the clip from Hannity last night. And do you think he’s trying to back out of debating you? Well, yeah, the answer is yes, absolutely. But you know, he, he met the COVID test that COVID test. He didn’t mean cognitive. He meant

No, he said cognitive I’m pretty, I’m pretty sure he went onto me because you know, you don’t have those tests that often he said, I take them all the time and now he met COVID, but I think he was confused by the question and the words and everything else. He didn’t mean that because he hasn’t taken any cognitive tests because he couldn’t pass one. I actually took one when I, uh, very recently, when I, uh, when I was, you know, the radical left were saying, is you all there is you all there. And I proved that was all there. Cause I, I aced it. I aced the test and he should take the same exact test, a very standard test. I took, took it at Walter Reed medical center, uh, in front of doctors. And they were very surprised. They said, that’s an unbelievable thing. Rarely does anybody do what you just did, but he should take that same test. But

The doctor said nobody’s ever done what I would. I was able to do there. Yeah. Except for everybody going into kindergarten this year, because that is essentially the kind of questions that are asked on this screening is not even a full blown test folks. And by the way, to contradict the president just a little bit, he says a recently, no, this wasn’t recent. You did not recently have a cognitive test. You would have spoken about that and you would have used it to put, to rest any kind of a question about your mental health. You had this test done. I think it was what, 2018. And it was just the screening part of it. And in the screening part of this exam, they asked you to identify certain animals. They asked you to identify shapes.

They ask you to name like five different things. Um, and here’s the thing, folks. Uh, again, as I mentioned, I don’t know if you’ve ever been to a kindergarten screening test. Uh, we had one a few years ago. Obviously when my kids were each going to kindergarten, they bring the kid in and they ask them like, Hey, what’s this animal? What’s this animal. Do you know your alphabet? Can you say it? Uh, how high can you count? Can you spell your name? That is almost but not quite. I mean, the, the cognitive screening is a little bit more tougher than, or tougher than that in some of the questions, but there’s a lot of similar questions that they ask five-year-olds. So Trump sitting there saying like, they were shocked, I was able to do it. And they said nobody’s ever done that good bull because my daughter did that. Well,

I watched her do it. It’s quite remarkable, but I didn’t even brag about it because I was like, you should be able to do these things. I’m proud of you for doing it, but I’m not going to sit there and say, Holy hell, nobody’s ever done that. Oh my God, you’re the smartest person in the world. Everybody else is basically mentally handicapped compared to you. No, that’s not what happens by the way, Donald to doctors don’t say crap like that to you, after you get a medical test done, they don’t say, Oh my God, nobody’s ever done that. Well, you are just amazing. Do you want your lollipop or would you prefer the Popsicle? This didn’t happen folks. And it’s infuriating to sit here and watch Hannity and Donald Trump attack, Joe Biden’s cognitive decline, which is there. It is very, obviously there. I’m not saying it’s not trust me, but so is Trump’s And Trump’s actually could be a bit of mental illness wrapped into it. And those are the kinds of things that these cognitive abilities tests are designed to find. These are just to see if you need to have real tests done.