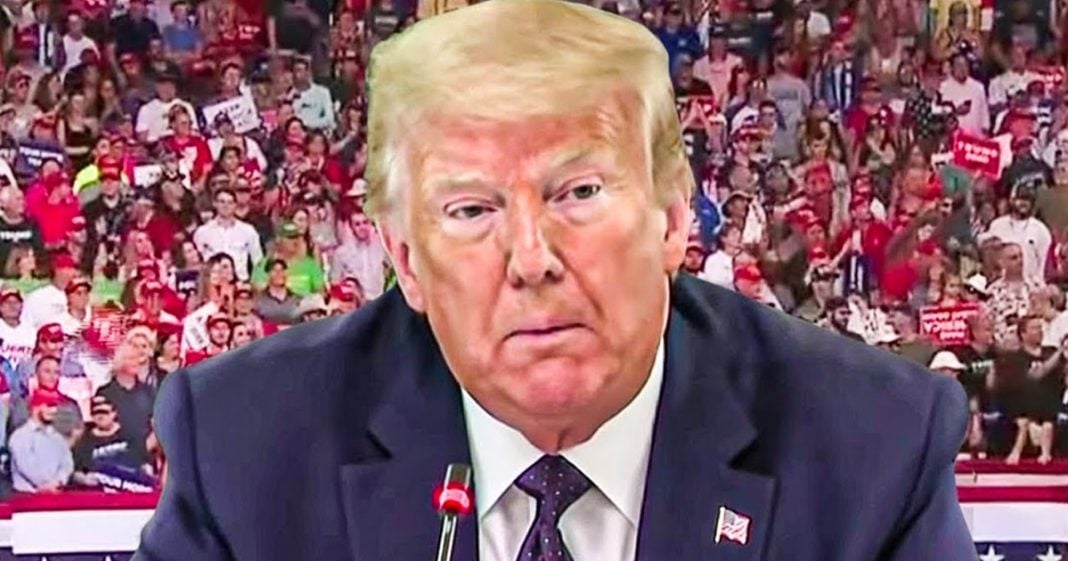 The polls aren’t getting any better for Donald Trump, but rather than trying to do something to turn it all around, he’s decided that he’ll go ahead and create a scapegoat to explain away his loss. His excuse is that voting by mail is going to create such massive fraud that we will never know how many illegal votes were cast in the election. There is no evidence to back any of these claims up, but that hasn’t stopped him from spending the past month making them. Ring of Fire’s Farron  Cousins explains why Trump insists on repeating these points.

Donald Trump recently has been on a tear about vote by mail, even though the president himself votes by mail the vice president of votes by mail, more than a dozen members of the Trump administration vote by mail. Yes. For the past month or so, Donald Trump has been out there consistently telling us that voting by mail is a recipe for fraud and disaster. If we allow universal vote by mail throughout the United States, we are going to see more fraud than we have ever seen in our entire lives. And in addition to Trump out there saying these kinds of things, he also has attorney general William Barr, who recently did an interview on Fox news where he repeated the same talking points that voting by mail is just an invitation for voting fraud. Now here’s the thing, folks, as we know, as we have discussed as study after study has proven even Trump’s own voter fraud commission has proven voter fraud is not widespread here in the United States.

And there is no indication that areas with higher vote by mail voting have higher fraud than places that have mostly in-person voting. There is no correlation between an increase in fraud. And in fact, several States already have very large vote by mail populations. States like Arizona, you know, red States, but Trump hasn’t cared about that in the past. In fact, Republicans have been fairly silent about the red States that do mostly voting by mail. You know, they’re a little more rural, kind of hard for people to get to polling places. But suddenly once Democrats say, Hey, there’s a pandemic. How about universal vote by mail suddenly, then it’s a problem though, except it’s not. And we know it’s not okay, folks. This is not just about Donald Trump being afraid of, uh, getting, uh, swept up in a landslide, electoral loss November. What this is really about is making an excuse.

That is what these talking points are serving. He knows, we know that voting fraud is not necessarily widespread. Of course you have the hard core, not so bright. A Republican base that thinks that voter fraud is everywhere. But in reality, what Trump is doing is he is creating this mindset. This massive voter fraud is everywhere mindset to go ahead and write off his potential November loss, because here’s what it, here’s what it does. If he loses in November, he’s going to do the same thing he did when he lost the popular vote in 2016. And he’s going to say, well, millions of people voted illegally. That’s why that happened. It’s not because I was a bad candidate. It’s not because I’m a bad person. It’s because I was cheated. I am the victim here, not the loser, the victim. And that’s what he’s doing with this. A claim of voter that does not exist according to his own administration. And if he does win in November, then he gets to come out and brag doubly by saying, listen, in spite of all of this voter fraud out there, I still won. You know, we knew vote by mail was going to bring a lot of fraud.

And man, it did bring so much fraud, but my base, you, my beloved voters were so much stronger than the fraud. And you pushed me over the top. Thank you. We did this together. It’s an excuse. It’s not true. Voting by mail does not increase, uh, increase the instances of voting fraud in the United States. But Trump needs to lay the groundwork now so that when he gets embarrassed in November, he at least has something to blame. Even if it’s not real.