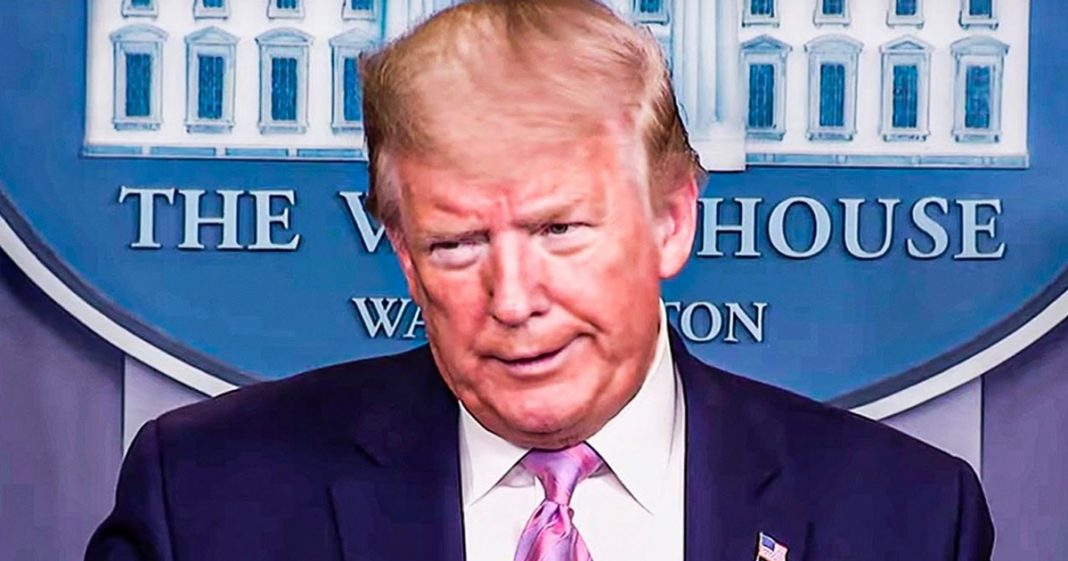 June was a rough month for the Trump reelection campaign, to say the least. But recent reports from multiple different outlets have painted a picture of a depressed and detached Donald slowing watching his campaign burn down from the inside. Between the fighting, the mistrust, and the nonstop bad news, the Trump reelection campaign has never been in worse shape and might not be able to pull back from the brink.  Ring of Fire’s Farron Cousins discusses this.

You know, it’s easy for outsiders to look at the Trump reelection campaign and see that things are not well, right. They don’t have any coherent message. Um, all of their attempts to kind of bolster Donald Trump’s, standing with the voters have completely fallen on their face. Nobody seems to know what they’re doing. And that’s what we can tell very obviously from the outside looking in, but according to recent interviews with campaign, uh, insiders people inside the Trump reelection campaign, uh, by the way, from multiple different media outlets, they’ve all told the same story. And that is a story of a campaign that is falling apart from the inside out. Yeah. And not just in terms of not knowing what the hell they’re doing, there’s lots of fighting. They say Jared Kushner, according to these reports has reportedly been telling Brad Parscale during meetings to shut up and otherwise shushing him as people from the case pain admitted.

But then, then even though the two cannot get along and Kushner disagrees with what Parscale is saying, some are also saying that Kushner is then going to other high ranking Republicans and telling them to tell Trump how good of a job Parscale is doing. So Kushner is actually somehow for some reason, trying to play both sides of the Parscale thing. One is you suck, stop talking. The other is guys, go tell Trump how great this guy is. Right? None of that makes any sense, but neither does anything that Jared Kushner does. Um, another thing is that as bad as the polls are that we see, we also have to understand that campaigns do internal polling. You know, they have their own private polls that they conduct. They hire people to conduct. We typically do not get to see those, but according to people inside the campaign, the internal polling is actually scope much worse than the external polling.

The bullying that we do see reported on because according to their internal polls, Donald Trump is not only losing all the States that we know he’s losing. He’s also losing Georgia and Kansas two States that are not swing States. And Trump is losing them according to their own internal polling. And all of that combined has led to another story. This one by a vanity Fair’s Gabriel Sherman, who says that people inside the campaign say that Trump is just down in the dumps, watching his campaign fall apart, watching everybody fight, knowing none of them know what they’re doing. And then seeing all of these polls has sent Trump’s spiraling down into a depression. Uh, this is where Gabriel Sherman had the right. He said, Republicans that have spoken with Trump in recent days. Describe him as depressed and quote down in the dumps. Uh, people around him think his heart’s not in it.

A Republican close to the white house said torn between the imperative to win suburban voters and his instincts to play to his base. Trump has complained to people that he’s in a political box with no obvious way out. According to the Republican Trump called Tucker Carlson late last week and said, what do I do? What do I do well for starters, don’t call Tucker Carlson for advice on how to win over suburban voters. But the reason Donald Trump is even reaching out to Tucker Carlson at this point, it’s good is because Tucker Carlson’s ratings have gone through the roof and he is now the highest rated person on Fox news. At the moment he is overtaking Sean Hannity, not just in ratings, but for that special place in Trump’s heart, that’s what’s happening. And it’s going to spell doom for Donald Trump because nobody he’s talking to is giving him good advice. And I guarantee you Tucker Carlson isn’t either.