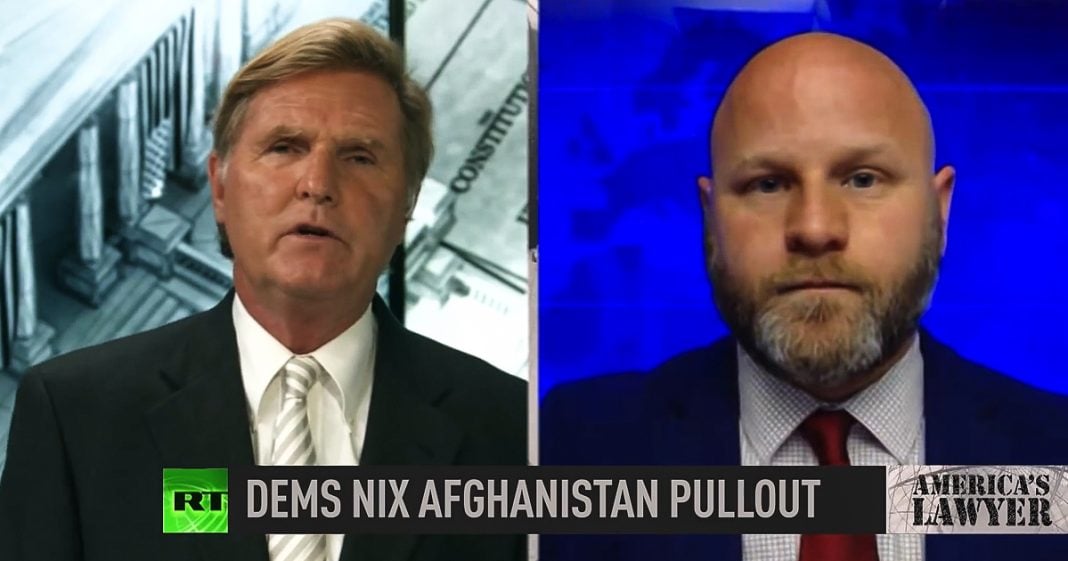 Via America’s Lawyer: 16 Democratic senators vote against the withdrawal of U.S. troops in Afghanistan. Could the ‘Russian Bounty’ narrative be a tool to perpetuate our military presence in the Middle East? Mike Papantonio & Farron Cousins discuss.

Mike Papantonio: Last week Democrats and Republicans joined together to send Trump a message that they’re not going to support ending the forever war in the Middle East. This to me is the most peculiar story. Look, first of all, we got a president who hasn’t done that many great things, but getting us out of Afghanistan, that’s pretty, that is pretty darn important. All of a sudden we see this new, we see this new, look, we’ve always assumed that the Republicans for the most part have been warmongers. I mean, they love a good war. And then, you know, just, just, just look history after history, but now what’s developing even more solidly is this list of Democrats. What was it 12 or 13 Democrats that signed up on the idea? No, we don’t want to leave Afghanistan and we, we want to, we want to keep our, our, our soldiers in Germany. Pick it up from there. This story to me is very bothersome because we used to have a line in the sand. They were called Democrats, but not anymore.

Farron Cousins: Right. You, you and I have been in this business long enough to, we’ve done plenty of segments way back in the day when Democrats were running on ending the Afghanistan war, anytime they’d run for House or Senator or president, that was part of the pitch there was, we’re going to end these, you know, George W. Bush Wars, and they’ve done nothing but perpetuate them. You know, all of those promises that we’re going to end this we’re the antiwar party. It’s a complete sham. 16 Senate Democrats, you know, a lot of people you would expect, but unfortunately, some that you wouldn’t have expected to follow this, like Sheldon Whitehouse.

Seeing his name as one of the people who said I don’t support withdrawing half our troops from Afghanistan, that was quite shocking to, to be perfectly honest. Sheldon Whitehouse has been, you know, fairly solid. And this was a, a huge, huge mistake for him. But to see these Democrats, as they really are, that that’s telling the public something. You know, on certain issues, there’s not a whole lot of daylight between the left and the right. And unfortunately, these forever wars is one of those issues where you’re not going to find much disagreement between Republicans and Democrats in Congress.

Mike Papantonio: Yeah. We’re talking, we’re talking about, we’re talking about a war that’s cost us in excess of a trillion and a half dollars, trillion and a half. We’re talking about a war for two decades. There are 150,000 fatalities in this war. Okay. So we start there and we say, what is happening with the Democrats to where they think this is a good talking point now? Now look, New York Times predictable. They, they ginned up the Iraq war, CNN, ginned up the Iraq war, MSNBC, the Iraq war. You might remember their big maps all over the floor and people walking around and trying to tell us day to day, how they’re embedded journalist are there for the war.

Farron Cousins: Well, you know, you, you hit on a really good point there too with the media, because the media just a week, week and a half ago, was actually trying to keep the United States in Afghanistan before this vote even took place. When they’re running all of these stories that still have not been verified and we don’t have the actual evidence saying that Russia is paying the Taliban bounties to go out there and kill US soldiers in Afghanistan. And if that’s not, you know, a cause to keep supporting these endless forever wars, then I don’t know what is, but the media knew what they were doing. You know, I believe these intelligence officials who leaked these stories knew what they were doing, especially with the timing of this. This is to, you know, coincidental to be an accident. They knew that this vote was coming up.

They knew what Trump was trying to do. Again, as you said, one of the only good things this man would have done in office, and here, the Democrats teamed up with a member of the Cheney family, you know, partially based on these unverifiable stories from the New York Times. And here we are, and they’re still trying to sell us this boogeyman that’s always out there. It’s behind every sinister thing that happens here in the United States. You know, they can admit, God forbid that maybe our country’s just screwed up and we make bad decisions. It always has to be some outside actor who’s, who’s made things so much worse for us.