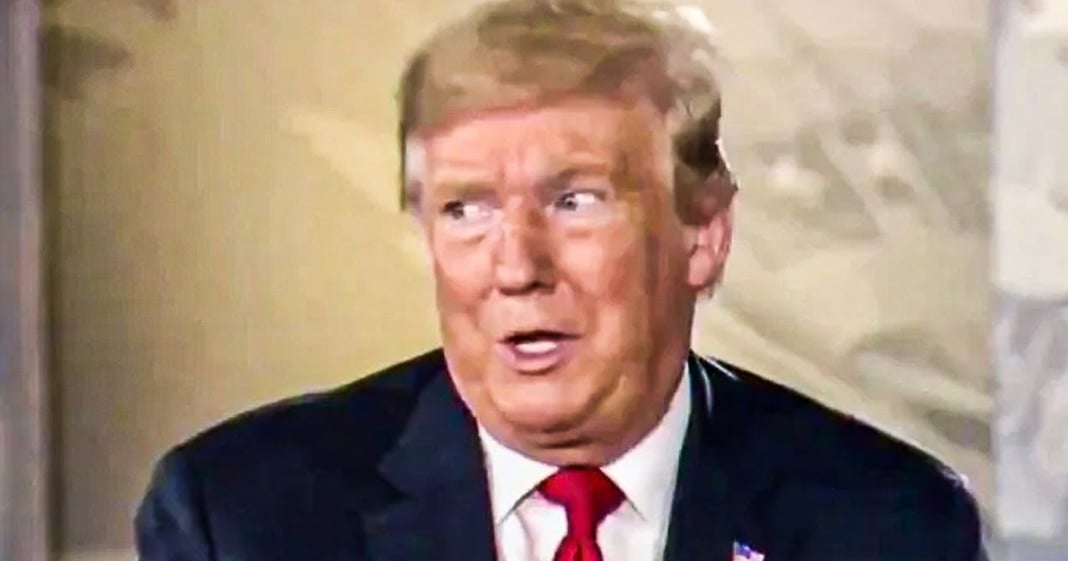 Donald Trump is exceptionally angry that the Supreme Court ruled that the investigators in New York can get their hands on Donald Trump’s financial records, and the President wanted to make sure that the entire world understood how angry he was. He took to Twitter to have yet another public meltdown, where he claimed that it is actually the former Obama administration that should be investigated, not him. Ring of Fire’s Farron Cousins discusses this.

So yesterday we got the, uh, Supreme court ruling, a seven to two Supreme court ruling, by the way, uh, saying that the investigators and prosecutors up in New York can in fact get their hands on Donald Trump’s financial information. Um, there’s a couple of caveats to that, by the way. It’s not as cut and dry as yeah. Trump, you’ve got to hand this over now. Um, you know, it’s a little more nuanced than that, but overall, he is eventually going to have to turn those things over. And the court specifically did tell him you are not above the law. You are not immune from prosecutions and investigations and as expected, this didn’t go over well with Donald Trump. So he did what he always does. He went on Twitter and had a very public meltdown for the entire world to see. Here is the series of tweets sent out by the president. Following this seven to two court ruling against him.

We have a totally corrupt previous administration, including a president and vice president who spied on my campaign and got Kate. I think he went and got caught and got caught. Sorry. I screwed up there too. That’s kind of funny. And nothing happens to them. This crime was taking place even before my election. Everyone knows it. And yet all are frozen stiff with fear, no Republican Senate judiciary response, no justice, no FBI, no nothing. Major horror show reports on encomium McCabe, guilty as hell. Nothing happens. Catch Obama, Biden, cold, nothing a three year $45 million Mueller hoax failed, investigated everything for another president. This is about prosecutorial misconduct. We catch the other side, spying on my campaign, the biggest political crime and scandal in U S history and nothing happens. But despite this, I have done more than any president in history in first three and a half years.

Well, that’s good. I mean, you know, he kind of ends it with a Bragg after having his toddler like meltdown. They’re like everybody on the don’t mean to me and not do this, but Hey look how much I’ve done. I am pretty bad ass. Right? Right. Uh, no, you’re not. No you haven’t. And none of the other stuff you said was true whatsoever. See, here’s what happened. Uh, first of all, cause this always drives me crazy. It was not a $45, $45 million Mueller hopes that investigation did. In fact, turn up lots of different crimes. Uh, it’s just that Mueller himself believed that his hands were tied and he could not file charges against you. He left that up to Congress. Congress dropped the ball. It didn’t cost $45 million. In fact, it actually made a profit because of all the money they took from your wealthy friends.

There you have that. Uh, it also did, by the way, in cover lots of instances of Russian interference, any who let’s get to the other claims, right? The claims that Obama and Biden spite on me, I love how you’ve changed it. Now, Obama spied on me. Now you got to tie in Biden to it too, because know you’re running against him now, um, that didn’t happen. And the DOJ has in fact looked into that. They couldn’t find anything illegal. They couldn’t find anything prosecutable, same thing with and McCabe. They couldn’t find anything prosecutable about these people. I don’t even care if that’s not a word, but that’s what happened. Your people and the Republicans in the Senate did in fact continuously try to find some kind of crime to pin on these guys. And so far, three and a half years in, they got nothing.

And man, they have looked at everything. Even the two people that you love to point out all the time, Lisa Page and Peter struck, right? Still nothing, nothing illegal that you can pin on them. But here you are having another meltdown on Twitter because you didn’t get your way because for once in your life, you may actually have to answer for what you’ve done. Why are you hiding these financial records? So diligently? Why are you so adamant that prosecutors can’t look at them? There is no doubt in my mind that these documents are going to show the president committed a crime. If you’re looking at this rationally to see how unhinged he gets, when these documents that he has fought all the way to the Supreme court are now eventually going to be released to prosecutors, see how unhinged he becomes. It’s cause there’s crimes in there. Folks that is obvious to anyone with even half a brain there’s criminal activity here, And he’s going to get caught for it. And he’s going to get caught for it in a venue where he can not receive a presidential, pardon? It all eventually comes crashing down

And that’s what’s happening with Donald Trump. He sees it crashing around him, his personal world, his professional world and his political world are all crashing down around him with this Supreme court ruling. So all he knows how to do is make up a bunch of crap that he hopes the public will believe about his predecessor and his current opponent, but nothing that he said in there was true. These matters have been looked into. These matters actually have been investigated by Trump’s people, Trump’s people with an ax to grind and even they couldn’t find anything after three and a half years to nail Obama with.