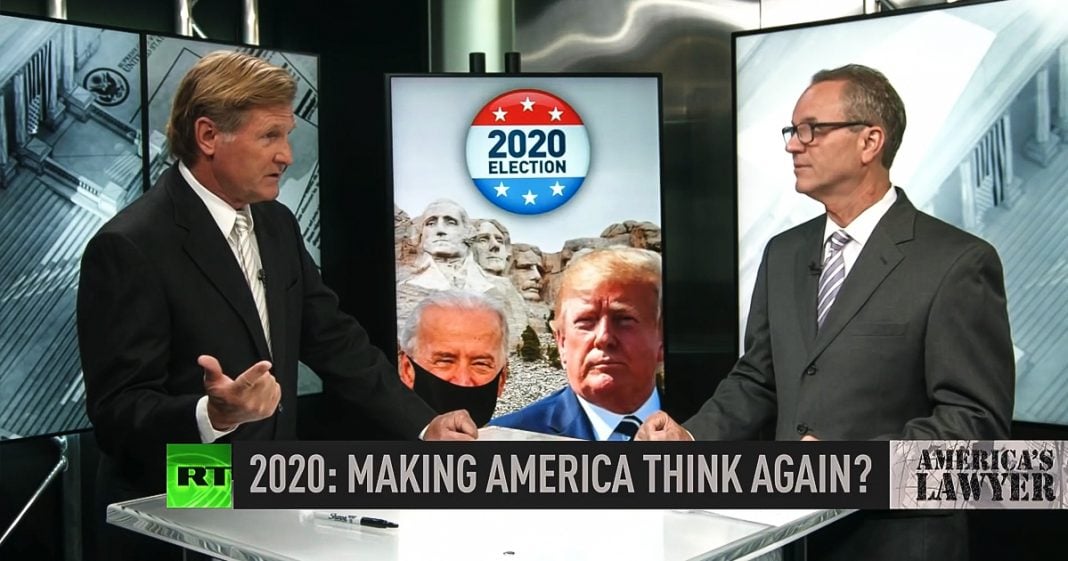 Via America’s Lawyer: Media analyst David Lamb joins Mike Papantonio to update us on the 2020 election. Trump’s approval rating continues to slide following his controversial Mount Rushmore address, while Biden is at a crossroads determining which Democrat would serve best as his running mate.

Mike Papantonio: As November creeps closer, president Trump’s independence day address, and Joe Biden’s ongoing search for a running mate, they become big news. Let me begin with this. I’ve got Dave, I’ve got David Lamb with me, probably the foremost expert in this area. And I thank you for joining me. Okay.

David Lamb: Glad to do it.

Mike Papantonio: Let’s, let’s begin with the notion of approval rating. If I’m talking to you as the, as an expert in that area, what is the significance of approval rating as it relates to this particular, this game?

David Lamb: The number to remember with approval ratings is 40%, below 40% is, is a cemetery. Above it the, the options are much better. Gallup recently published their approval ratings. Trump’s approval rating is at 38% as we speak, in early May it topped off at 49%. A couple of interesting notes about this. You remember the concept of Reagan Democrats, right?

David Lamb: So Democrats that would cross the aisle believed in what Reagan was talking about and signed on. In those 38%, 91% approval rating among the GOP 2% among Democrats, the lowest in the history of the Gallup poll.

Mike Papantonio: Okay. Okay. So let’s talk about, my memory was is that, that HW Bush had this problem.

Mike Papantonio: Jimmy Carter had this problem. He lost.

Mike Papantonio: But there’s also this notion that, that you hear talked about is at the same time of where we are in this election cycle, Obama had a less than 40%. Is that, is that accurate?

David Lamb: That is, Obama was right at 40%. And that’s the silver lining for the Trump supporters, because from summer to fall, Obama had a 6% bump, which got him closer to 50% by the time the election took place. So if Trump is able to, to pivot in some way and pull that approval rating out, by the way he handles the Coronavirus, maybe with the, what happens with the economy, how he handles all of the protest and the tearing down of the monuments, all of that, there are opportunities. But at 38%, like you said, HW Bush, Jimmy Carter, both lost. The last president Harry Truman in 1948 had a 40% approval rating. That’s how far back you’ve got to go to find an incumbent that gets reelected.

Mike Papantonio: Wow. Okay. So this is, this is a big number. Watch the approval rating.

Mike Papantonio: If, if, if you can have, if the turd blossom Karl Rove can raise that approval rating for Bush above 40%, he at least is still in the game. Is that your?

Mike Papantonio: Okay. Let me ask you about the Mount Rushmore speech. I don’t get this. It was so divisive. I mean, you had the New York Times, it’s racist, it’s divisive. You know, this is the worst thing that could possibly happen. The media was just like, you know, their hair was on fire, hysterical about this. What, what, what does the right say about it? What, what is his core, what is, is his core say about it?

David Lamb: The whole, some of the phrasing that the president used in that speech was a culture war, and this issue typifies it. The left thought, like you said, that the New York Times some of what they said about how far left and, and, and radical, how, how scary the speech was. The right love that speech. In fact.

Mike Papantonio: Now, when you say the right, was that just his core.

Mike Papantonio: But was it beyond that?

David Lamb: It was not. But his core.

David Lamb: 40% and it was red meat for his core. But again, is Trump having to still rally that base to make sure to shore that base up as he heads toward November.

Mike Papantonio: Okay. Well, again, the question is, can he do it? And as he’s looking at this, you know, you have to, you have to wonder, because you do have Biden. Is he still in the cellar?

David Lamb: He he’s, he comes out every now and then. He’s done some fundraising lately that has done some.

Mike Papantonio: But it’s working for him.

David Lamb: It is.

Mike Papantonio: I mean, let’s call it what it is. He’s in the cellar. He’s, he’s avoiding any kind of real controversy. They’re not letting him talk, which is a really good idea, but it’s working. That’s the main thing. But as we, as we approach this election, I saw that Trump had raised a bill, is it, is a billion dollars?

David Lamb: It’s nearly a billion dollars, it is.

Mike Papantonio: So does, can a billion dollars move these favorables that you just talked about? Is there a way to do that? Or can you move favorables by attacking the other side? Tell me what you think.

David Lamb: Well, I think with that bill, that billion dollars that has been raised between Trump and the RNC and $250 million cash on hand, you’re seeing some signs as to what they’re going to do with that, because that’s a considerable advantage. The Biden team is not even releasing how much cash they have on hand. I don’t know, but I would say that’s a bad sign for the Biden camp if they don’t want anybody to know what they have in the bank. But what has happened, the Trump campaign has committed a hundred million dollars in ads for Arizona, Florida, North Carolina, Ohio, Pennsylvania, as well as Wisconsin. So key States, States that he won, but also that’s where he’s committing money to.

Mike Papantonio: If the billion dollars that he has can be used by Karl Rove the turd blossom to somehow raise the favorable. I don’t know how you raise favorables though with attack, with attack ads. You see what I mean? And it seems to me that that’s why that money is, is in the, why he has that money right now. So right now you got Biden who has to make a really important decision and that’s who is his VP. I really liked Tammy Duckworth. What a great VP.

David Lamb: The Senator from Illinois.

Mike Papantonio: I mean, you’d understand that, okay, if he doesn’t make it through the first term, Tammy Duckworth would be there. I really like this, this woman. Let’s talk about it.

David Lamb: She’s a Senator from Illinois, a former army Lieutenant Colonel. She’s a pilot yourself, Pap, an army helicopter pilot. She’s a double amputee and a purple heart recipient. So the resume is very impressive. And the reason she stands out for the Biden camp, one of the things that with that billion dollars that the Biden camp knows that Trump’s going to do is attack them. How, how do you go about attacking someone who has, who has that sort of resume? So that’s what makes Tammy Duckworth so, so attractive to Biden and his team.

Mike Papantonio: And so the call, your call would be out of everybody he’s considering that’s the one that moves the numbers?

David Lamb: That, that is certainly the one that diffuses, because really at this point, if the numbers are anywhere close to accurate, Biden has around a 10, 10 point lead. At this point, you’re just protecting the lead. That’s all you want to you’re, you’re kind of playing defense. So this choice of Duckworth really kind of takes some ammunition away from Trump and the Trump campaign and their efforts to, to call the Biden, Biden camp and the Biden presidency, a far left wing, radical, takeover.

Mike Papantonio: Right. It takes all that away.

David Lamb: It takes it off the table.

Mike Papantonio: Yeah, and I think that’s brilliant. Of course the Democrats advisers have never done the brilliant thing. They’ll end up with somebody that’s, it’s an incestuous process. You know, who’s been around the longest? You know, who’s who has been part of this committee and that committee? Who’s raised money? That’s how they think. This woman can make the difference.

David Lamb: She can make it happen.

Mike Papantonio: Yeah. David, thank you for joining me, okay.

Mike Papantonio: That’s all for tonight. Find us on Twitter and Facebook @facebook.com/rtamericaslawyer. You can watch all RT America programs on Direct TV Channel 321. Also stream them live on YouTube and be sure to check out RT’s new portable app, where you can watch all your favorite shows. I’m Mike Papantonio and this is America’s Lawyer where every week we tell you the stories that corporate media is ordered not to tell because their advertisers won’t let them and because of their political contacts won’t allow that to happen. In the meantime, have a great night.