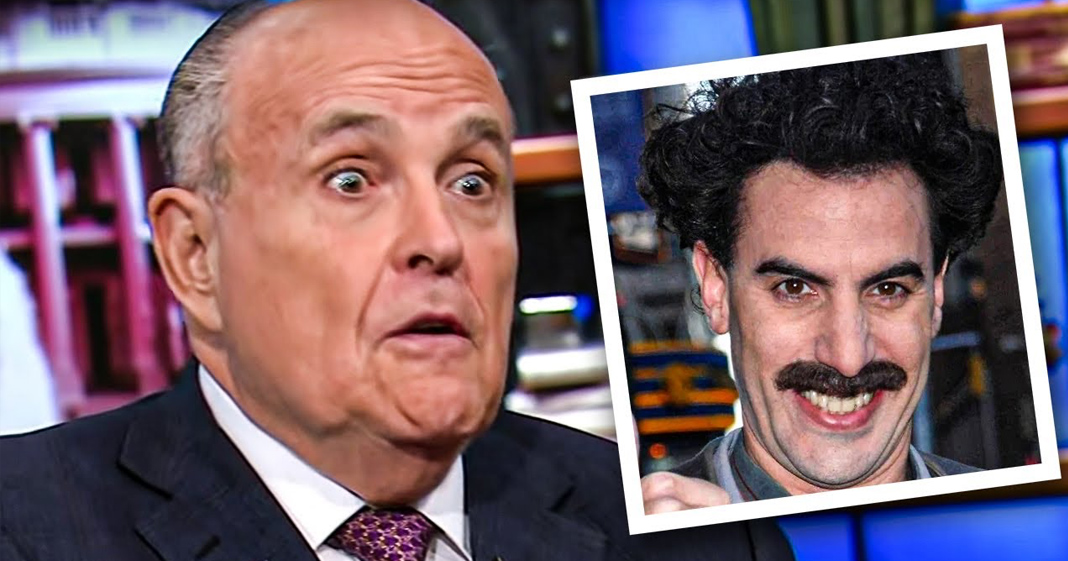 During what Rudy Giuliani believed to be a serious interview last week, a scantily clad man came running through the set, causing commotion that led to Rudy Giuliani calling the police. However, the man happened to be Sacha Baron Cohen in disguise, which Giuliani didn’t know at the time. There is a lesson to be learned about conservatives in this story, and Ring of Fire’s Farron Cousins is more than happy to point it out.

A couple of days ago on July 7th, Rudy Giuliani sat down in the Mark hotel in New York city, a female interviewer there, according to Giuliani, they had professional cameras, professional lights, setups, and he was prepared to do his interview with this, a woman he done, I guess, know who she was or what outlet she was with. But Hey, he was going to do an interview. Cause Rudy Giuliani loves being in front of the camera. And then something happened that disrupted this interview, crazy person comes running in wearing this ridiculous outfit, interrupts everything. And Giuliani decided he was time to call the cops because this man interrupted his interview, turns out this man happened to be Sasha Baron Cohen, who pranked Rudy Giuliani. Now it’s not known quite yet. As of this recording, I guess I should say if the entire thing was part of a skit for what a Baron Cohen’s a programs or just something he had set up just for fun. Uh, that is unclear at this point, but here is the story as it happened in Rudy Giuliani, his own words. According to page six, this guy comes running in wearing a crazy. What I would say was a pink, transgender outfit. It was a pink bikini with lace underneath the translucent mesh top. It looked absurd. He had pulled up. I love always taking the time to critique the actual outfit. Like these two things. Totally didn’t go together. You can not wear the mesh top with the pink bikini.

He had the beard bare legs and wasn’t what I would call distractingly attractive. He goes on, this person comes in yelling and screaming and I thought this must be a scam or a shakedown. So I reported it to the police. He then ran away a scam or a shakedown. Yes, because those usually involve individuals in brightly colored outfits, simply causing a ruckus and then leaving. That’s neither a scam nor shakedown, nor is it by the way illegal. And you Rudy Giuliani, being a lawyer actually know that. And that’s why this story is actually rather important because it shows what Republicans think. So think of a police right now. Rudy Giuliani knows that whether this man was pranking him or whether this was just a random, crazy person, what just happened, there was not technically illegal. It’s not illegal to interrupt an interview. You maybe you could pop them on trespassing, I guess. But what if it was a guest? You don’t know that, but you called the cops anyway because that’s how Republicans view cops. That’s how all of these angry Karen’s that we see in these viral videos view the cops. It doesn’t matter if it’s illegal or not. You didn’t like what was happening. And you’re calling the police like a little kid calling for their parents saying, come clean up this mess. Cause I don’t like it. I don’t like what he’s doing. Is it illegal? I don’t care.

I want him gone. That’s what Rudy Giuliani did there. That’s why this is actually an important story because it tells us, it shows us how Republicans view police officers. This is why they don’t want them defunded. Because if you defund the police, all the police are going to have the resources to work on is, you know, murders and things like that. That are actually important crimes that we need investigated and stopped. They’re not going to be able to have enough officers running around to be the nannies for these wimpy ass Republicans who like to call the cops whenever they’re mildly inconvenienced, that’s what they want. They want cops running around to act as their mommies. When something makes them uncomfortable. When they don’t like what somebody else does, they can call the cops and the cops will deal with it. And I can go about my day. All happy knowing that this little nuisance has been dealt with. That’s why Republicans don’t want to defund the police. And that’s what Rudy Giuliani was trying to do before he realized he was being pranked by Sasha Baron Cohen.