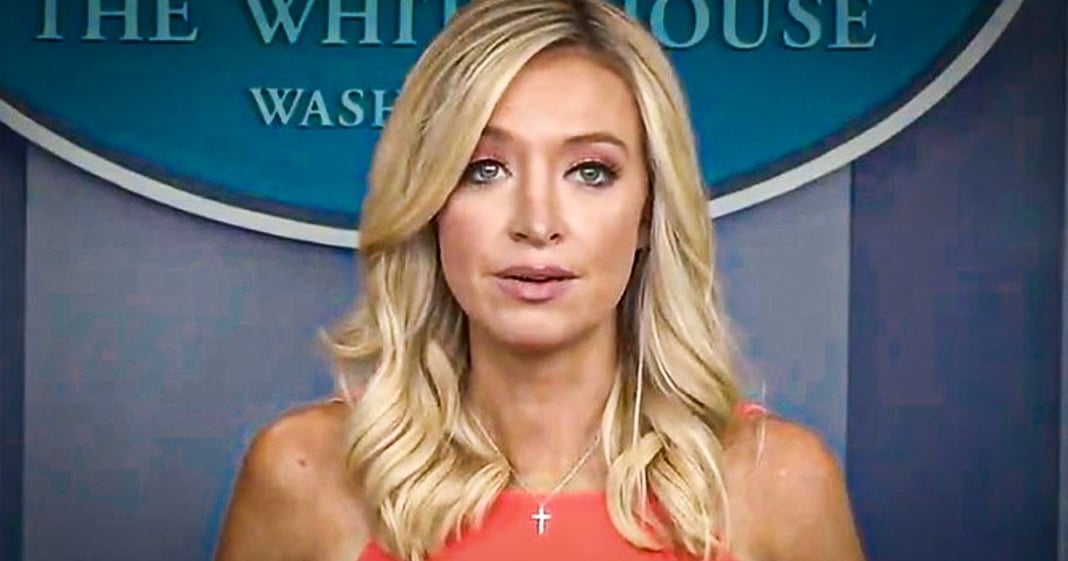 The parents of White House Press Secretary Kayleigh McEnany scored between $1 million and $2 million in PPP loans from the Covid-19 relief funds. The McEnany’s own a roofing company in Florida, and it is unclear at this point if their business actually suffered any financial damages from the pandemic, or if they just wanted to get their hands on some cheap capital while it was available to them. Ring of Fire’s Farron Cousins discusses this.

White house, press secretary Kayleigh McEnany the woman who once said two years ago that people who accept government assistance should feel ashamed of themselves. It was revealed earlier this week when the small business administration released the names of all the companies who took in the PPP loans, that her parent’s company McEnany roofing here in Florida, actually received somewhere between one and $2 million in those low interest government loans that in many cases are going to end up being forgiven. So the white house press secretary Kayleigh McEnany, who said that you should be ashamed of ever taking any kind of government assistance. I wonder if she’s called her parents up this week and said, mom, dad, you guys should be ashamed of yourselves. You took government assistance because that is what this is folks. You’re getting these very low interest loans from the federal government, from the SBA. And in many instances, as long as you can prove that you spent this on employees, um, let’s see rent utilities, uh, or employees, as long as that’s all you spin it on. They’ll forgive it. You don’t have to pay it back. It’s free capital.

So I wonder if a Kayleigh has made that phone call to her parents. I wonder if she has actually told them you should be ashamed or that she is ashamed of them because by her own standards, her parents have now become the lazy freeloaders that she hates so much. Now here’s the thing I have no way of knowing if McEnany roofing did, in fact actually need this money to be able to pay their employees. Um, you know, this is a construction business here in the state of Florida. Construction was deemed an essential service. So I do know that they were not forced to shut down here in the state of Florida. Um, you know, they, they work outside. They’re not typically in close contact with anyone other than the people that they work with every day because it is construction. So it would seem unlikely, uh, that they would take a big hit from this.

Uh, unless of course, obviously the flip side of that is it’s not just about them not being able to work. They can work, but people can’t afford to buy new roofs when we’re in the middle of an economic downturn. Maybe, maybe, but even that still it’s a little iffy, but anyway, it’s not for me to decide whether or not they deserve to get the loan. They applied for it. They got it. There is nothing I can personally do about it, except continue to call out businesses. Maybe that includes McEnany roofing. Maybe it doesn’t, but too many businesses who didn’t need any of this money have taken it. They have continued to lay off their workers and they’re treating it as free capital reinvesting in their own business. Not because they needed to, but because they saw this opportunity and they took it, they took this money from the federal government money that could have instead gone to save one of the businesses that’s had to close its doors.

We have seen massive conglomerate businesses getting their hands on this small business money, the PPP, they shouldn’t have been able to qualify for it, but they created enough shell companies to say that, Oh, no, I’ve only got five employees here at, uh, you know, McDougall industries when really, Oh, that’s just a subsidiary of, you know, some kind of massive fast food chain. And that’s how they got their money. Uh, hotels did the same thing to get their hands on more money. It’s despicable. It’s disgusting. And there should have been a process in place to prevent this from happening. But Steve Mnuchin didn’t want that. Steven Mnuchin wanted his big wealthy friends to be able to get their hands on as much of this money as possible. I can’t say with any certainty, whether or not the one to 2 million that McEnany roofing took was legit or not.

Uh, unfortunately that’s not the kind of thing we can know about. In fact, we don’t even know the exact amount they took. We know it was least 1 million, uh, no more than 2 million. They don’t release the exact figure, but that is a lot, um, a lot of companies did not receive, uh, anywhere close to even 1 million, but it’s good to have friends in high places, right? Maybe they needed the money and if they did, then hopefully the business is able to continue. We don’t want any businesses to close down small businesses, anything like that. So hopefully they’re able to still go. But if it turns out that they didn’t need this money, that they were doing just fine plugging along and that they used it just because they wanted to maybe renovate their offices or, you know, just kind of have a little more capital on hand. They need to understand that your daughter is the white house, press secretary, and people are going to be looking into this loan that you took. And they’re going to watch and demand receipts for every penny that you spend, be aware of that and be ready for it.