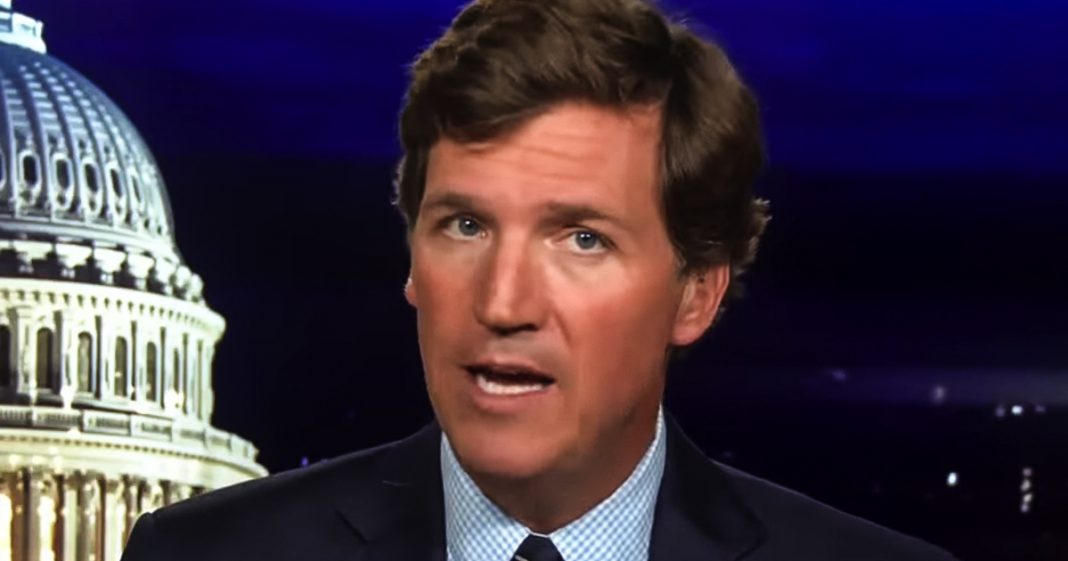 Tucker Carlson is currently the most-watched cable news host in history, and that little bit of “power” has absolutely gone to his and caused him to become far more racist than we could ever imagine. He echoed a white nationalist slogan on his program this week while launching into incoherent tirades about lawmakers of color. The man has become a danger to this country with his disgusting rhetoric, as Ring of Fire’s Farron Cousins explains.

Fox news host Tucker Carlson right now is absolutely drunk with what he believes is power. It was reported this week that Tucker Carlson’s ratings are now the highest they have ever been. They’re also the highest on Fox news right now. And coincidentally, the highest in the history of cable news Tucker Carlson’s program, as of right now is the most watched cable news program in history, terrifying, but he believes that that comes with a little bit of power. He believes it comes with a little bit of duty and he has used his new found power to go absolutely unmistakably, full white nationalists. That’s where Tucker Carlson is right now. This week, Carlson has engaged in countless different attacks on lawmakers of color, all coincidentally women, by the way, because he’s too cowardly, you know, to pick on men. So he thinks he should pick on women because in Tucker’s mind, women are weaker, but they have proven repeatedly this week that they are in fact, the superior and they have beaten the verbal crap out of Tucker Carlson, but that hasn’t stopped him earlier this week on Tuesday, actually, uh, his program ran a kryon on the bottom of the screen with pictures of representatives, Ilana, Omar, and Senator Tammy Duckworth that said we have to fight to preserve our nation and heritage.

And those in the know, we’re quick to point out on Twitter to let everybody else know that this is actually paraphrasing the slogan of white nationalists, those 14 words, which are, we must secure the existence of our people and a future for white children. Tucker Carlson’s people, unfortunately were not able to put the whole 14 words on their little Kira. And so they had to paraphrase it to suit Tucker’s needs. This man has gone full, not even white nationalists, just absolute full on racism coming out of Tucker Carlson’s white power hour, every single evening. That again, most watched cable news show in history. The only good news is that being the most watched cable news show in history still means roughly 99% of the population is not watching your show ever, ever. Okay. This is a small percentage of the population. I mean, literally one or less percent that watches the show.

So why is this such a big deal? Well, because Tucker Carlson is out there everyday spreading hate Tucker Carlson is out there every day, attempting to duck, uh, people like Tammy Duckworth who have absolutely come back in a Naya, lated him. And he comes back with things saying, you know, Duckworth is a moron or that, you know, she’s a, a coward, the woman who had both of her legs blown off by a grenade launcher over in the middle East as a coward, according to Tucker Carlson who never served, um, she’s beaten you talker take the loss and move on, but you’re not willing to do that because not only did you want to pick a fight with a woman, cause you thought you could win it, but you picked a fight with her because she’s of Asian descent, she was born in Thailand. You continuously attack representative Ilana, Omar, because she’s a Muslim

And you do that because you’re a white nationalist. You hate people who are not just like you. And in one of the segments, Tucker goes on, this is who was attacking both those lawmakers alleging that they’re absolutely out there encouraging people to destroy these Confederate statues. So Confederate statue, defender, Tucker Carlson said, quote, we live here. We don’t want to destroy it. We have every right to fight, to preserve our nation and our heritage and our culture. So according to Tucker, those Confederate monuments of the traders who seceded from the United States, that’s his culture in his heritage. Because as he says, we live here, Tucker, I’m gonna go ahead and correct you on that right now, bud, because you live in New York, New York was not a part of the Confederacy whatsoever. So you have no attachment in any way to any of those Confederate statutes.

That is not your heritage at all. And you live in New York now, but you were actually born in California to a fairly wealthy family that married into an even wealthier family. The Confederacy has never been your heritage. In fact, it’s never really been anybody’s heritage in the United States because it only lasted for five years. I mean, citizens United has been around for 10 years, you know, unlimited corporate money in politics. I wouldn’t say that’s our heritage either. It’s something that we should be ashamed of, not something that we should build statues to, but you’re out there pretending that this is you because racism sells with Fox news. And what you’re doing, the things that you were saying about these powerful women is absolutely because you’re hoping it’s gonna inspire one of your crazy viewers to go out there and do something horrendous to these women. That’s why he does it folks. That’s why he’s doing it. And he’s not going to stop

Until he’s successful. That’s the scariest part, this little, uh, I don’t even want to use the profanity that’s popped into my head right now. That would probably get me banned from YouTube. But this guy, um, he, he has to get off the air at this point. He’s almost out of right and advertising boycott isn’t even going to do any good because the only person left really advertising on his show. Who’s buying 10 times more ad time on Tucker Carlson’s program. Then the next highest company is the MyPillow asshole. Tucker Carlson show has been propped up by the MyPillow guy. So unless you want to buy a crappy pillow, you know, not really much we can do with the advertisers there because they’ve all been driven away yet. For some reason, even though the show is losing advertisers still the highest rated one ever. So I don’t know what route to go at this point. Hopefully we come up with an idea because the longer this man is on the air, the more hatred he spreads, the more anger he ferments. And the more likely it is that one of his deranged viewers is going to go out there and do some unspeakable acts. We have seen that happen in the past with other Fox news hosts and other conservative talkers. Let’s just pray that Tucker Carlson show goes off the air before something horrible happens.