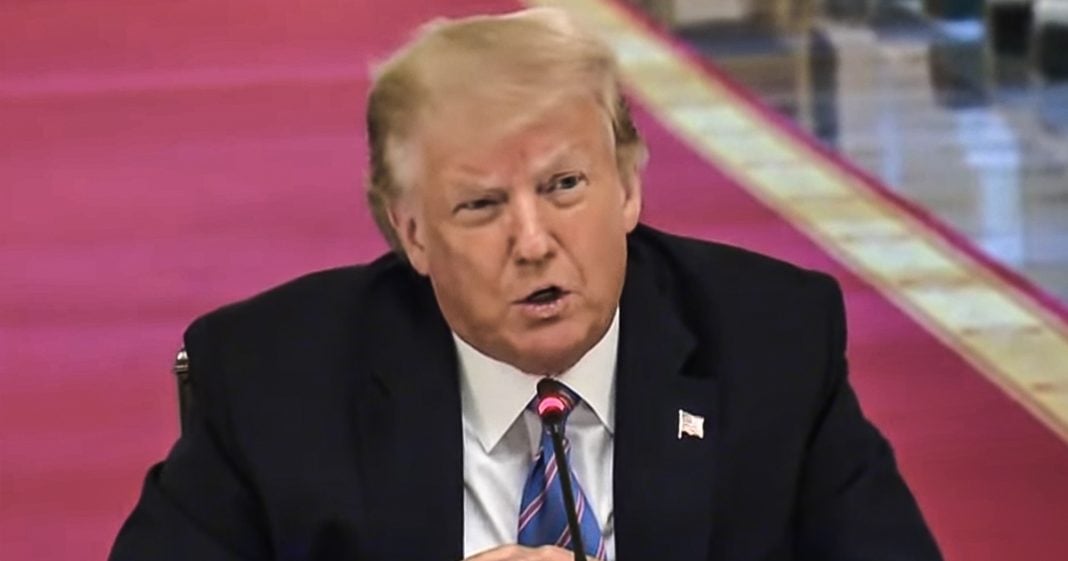 For several weeks, Donald Trump has been telling the world that the reason the number of cases of Covid-19 has gone up so much in the United States is because we’re simply doing more testing everywhere. But a new analysis of all 50 states shows that the increase in testing does not match up to the increase in new cases. Ring of Fire’s Farron Cousins explains what’s happening.

For many weeks now, Donald Trump has been trying to tell the public that the reason we are seeing such a massive spike and new COVID-19 cases here in this country is simply because we’re doing more testing, right? I mean, he famously, uh, said recently, I think it was at his Tulsa rally that, you know, if we stopped the testing, we’d stop seeing all the new cases because really that’s the culprit. It’s not that more people are sick than they were before. It’s just that we’re finding it more frequently than we had in the early days of the pandemic. Well, new research has come along to once again, prove that Donald Trump is completely lying his face off because that’s all the man knows how to do according to new reports out this week, 28 different United States, States have actually seen the number of positives increase at a higher percentage rate than the number of new tests performed.

So y’all have really fallen off, uh, and 550% increase in new positives. Um, Texas, 118% increase in new testing, 422% in new positive, uh, this entire graph, by the way that I’m reading here, all of these individual graphs, uh, follow the link in the description of this video, it’ll take you right to it. Uh, Axios has all of those on there, but here’s the bottom line folks. Trump has. Once again, lying to us, the reason we’re seeing so many new cases in the United States today is not because we’re testing more. It’s not because we’re actually looking for it now. It’s because more and more are getting sick. You need more proof of that. How about the fact that in States all over the country, we’re running out of hospital beds now, uh, Florida, again, uh, use a state as example. It’s where I am. Uh, 57 hospitals across the state now have reached capacity. We don’t have any beds anymore. Oops.

My County is one of the counties that, uh, ran out of beds. So hope you don’t get COVID-19 and hope you don’t have any other kind of emergency that would require you to spend time in a hospital cause they don’t have room for you now. And that is also going to increase the death toll. You know, if your appendix bursts and they can’t get you in, you’re really out of options. That’s what we’re looking at here. If you have a heart attack right now, Oh, I better hope they can find a hospital bed for you. Better hope they can find an operating theater, better hope that they can reach an on call doctor because they’re having to work extra shifts to battle COVID-19

Yeah, this is happening all over the country right now. And it’s happening. Despite the fact that Trump tells us that it’s not the man famously said a year or two ago during a speech, ignore what you see with your eyes. Ignore what you hear with your ears. He basically told in this speech to, I think it was a bunch of cadets at the time we did a video on it, but anyway, Okay. He told them to ignore reality. Yeah, we can’t continue to ignore reality. He wants to, but by doing that, he is putting every single person in this country at risk. We cannot continue to do this. We cannot afford to do this. People are dying. People are getting sick. And with him being at the top of this, uh, government food chain, he is to blame. You cannot shake that. You cannot shift that as president. This man is in charge and as long as he’s in charge, people are going to keep dying.