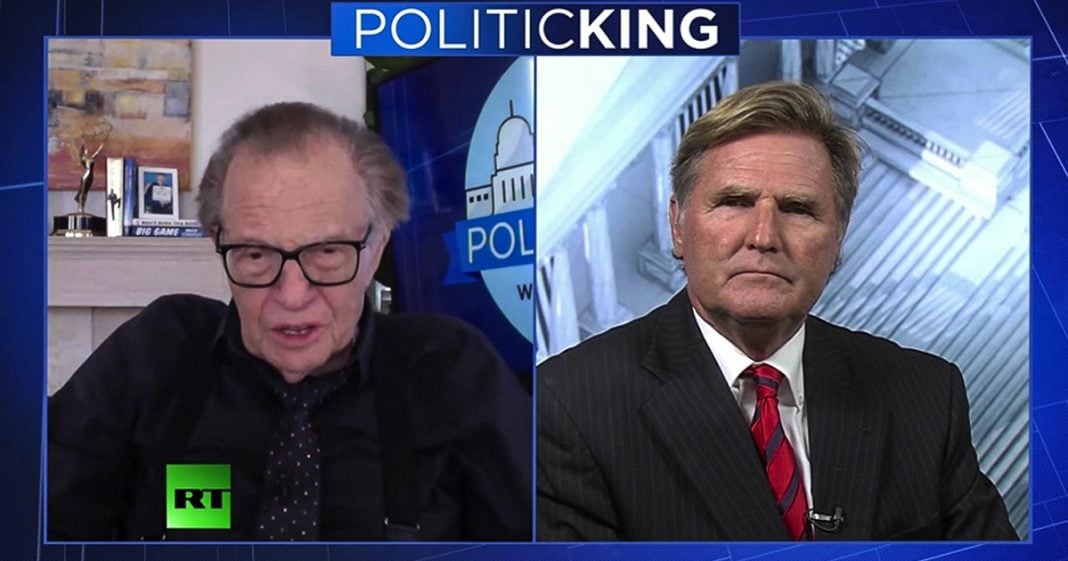 Via Politicking with Larry King: Authorities have finally arrested Ghislaine Maxwell, the alleged enabler of Jeffrey Epstein. Larry King is joined by Mike Papantonio to talk about the connections she knows about surrounding the Epstein scandal.

Larry King: He was. Do you expect him to come out in, in the trial of, ms. Maxwell or she’ll turn state’s evidence, right?

Mike Papantonio: Yeah. I think this is, as the FBI mentioned, Maxwell’s been slithering around all over the globe for 12 months since her buddy Jeffrey Epstein was arrested last summer. They, they, they finally found her in New Hampshire on this palatial estate that she had purchased with cash from interestingly enough, a shell company that both Epstein and she had set up. Maxwell’s been hit with six charges, one being perjury for lying to investigators years ago. And the rest are all related to her acting as a groomer and a recruiter for these young girls that Jeffrey Epstein and his powerful friends abused over the years. An attorney, interesting part of this story, an attorney named Brad Edwards is spectacular attorney out of South Florida, has been working tirelessly on this case, and this is a big step forward for him in this fight for, for justice, for the Epstein victims.

But here’s what we know so far. Maxwell has been accused of actively seeking out these young girls all over the world in putting them in, in Epstein’s ring. She, she would, according to the indictment, this is the way the indictment reads. She acted as a groomer of, of sorts for these girls, showing them how to perform massages on Epstein and other men. Her presence in the room with the girls, Larry, seemed to put the girls at ease. If you read this, if you read this indictment and make them think that everything was okay, that what they were doing was perfectly normal. What Maxwell did to these young girls obviously is deplorable. Here’s the interesting part of the case though, Maxwell is going to say that there was, there was a non prosecution, prosecution agreement that was signed. Okay. And it was signed back when Epstein was first prosecuted. Epstein’s pals, his political pals came to his aid and worked out this nonprofit prosecution agreement in 2008.

It included a phrase that Maxwell’s lawyers are trying to use to protect her from prosecution. It said that not only would Epstein not be prosecuted, but also his co-conspirators would not be prosecuted. Maxwell wasn’t expressed, explicitly mentioned in that agreement. But it, it, it contained a phrase that I think the phrase was not limited to people that were named in the indictment. So virtually anybody, the argument is going to be made that anybody that was surrounding that indictment, anybody that was surrounding the, the first Epstein problem, that they are absolved from all this. And here’s why that argument might not work. And my guess is the argument will not work because it only pertains crimes that were committed in Florida and much like Epstein’s arrest last year, new charges emerged that weren’t related to Florida, allowing prosecutors to go after him. This is the same kind of problem that they’ve got.

So, you know, the truth is, I don’t think this effort by Maxwell has a chance because, because there’s so many problems with that non prosecution agreement. The, the judge was totally dysfunctional, absolutely dysfunctional, where it came to his job. The prosecutors were dysfunctional. They didn’t do their job. The, the, the victims in that case under Florida law should have had the right to know what was going to happen in the pleading in the, in the, in the deal that was made. They weren’t made aware of that. The law in Florida is very specific about that. The chances of her, of her winning on this little glitch, I think is almost nonexistent, but that’s what you’re going to hear about a lot that she’s been absolved of all this, because she was a, she’s protected under that non prosecution agreement.

Larry King: Mike, you’re always on the mark. It’s always great having you with us.