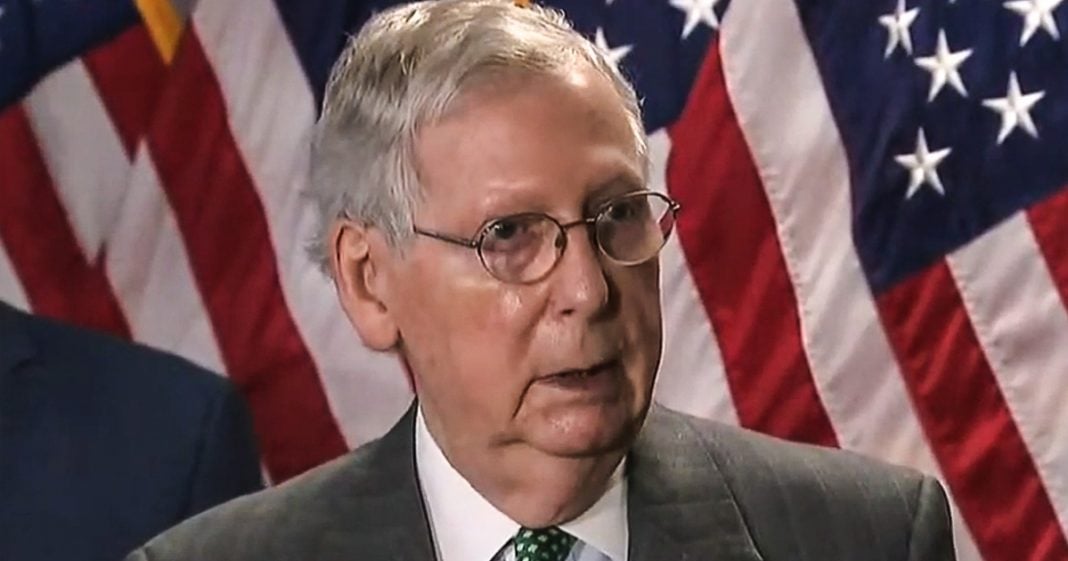 Election experts and forecasters this week have made it clear that they don’t just think Republicans are going to lose in November – they believe that Republicans are going to be facing a complete and total wipeout from the White House to Statehouses. This prediction seems fairly safe at this point in time, but anything could happen between now and election day, as Ring of Fire’s Farron Cousins explains.

It’s no secret that right now, Donald Trump, if the election were held today would probably lose by double digits at this point. But what about the Republicans? Down-ballot right. Yeah. We’ve, we’ve talked about it briefly. There’ve been scanned reports here and there what’s really happening with all of these other Republicans who are too afraid to stand up to Trump. They keep begging Trump for a better message for the party to run on in 2020. But so far they’ve gotten nothing. So what about them? Well, according to experts this week, many different election experts and forecasters actually, uh, they’re predicting a complete and total wipe out of down-ballot Republicans in November. And the reason for this, according to, uh, this is from Henry Olsen, who’s with the Washington post. Uh, this is quite interesting, the way he came to this conclusion of the complete wipe out here, us elections in both the house and Senate are increasingly sinking with broader presidential races.

In 2016, every Senate race was won by the same party that won that state in the presidential contest in 2018 house races, largely correlated with Trump’s approval rating with even the most popular G GOP incumbents, unable to run more than a few points ahead of the president polls for Senate races this year are showing the same trend with Republican incumbents. Total’s closely matched with Trump’s this spells disaster for the party, uh, at another forecaster goes on to say, Republicans also look set to lose house seats. If trends don’t improve, things could get better. Republicans would hold many seats at all levels. If Trump were to lose by only six points, rather than 11 or more. And right now they’re thinking it’s going to be 11 or more. So not only are Republicans able to kiss goodbye, any hope of retaking, the house of representatives. They’re also likely to lose seats, increasing the number of Democrats in that body as for the Senate, as it stands right now, based on recent trends, 2016 and 2018, it doesn’t look like Republicans are going to be able to hang on to the Senate either.

But you know, if you read into this a little more, it’s not just the house and it’s not just the Senate. This is state houses as well. We are seeing red States right now. You have States that voted for Trump, typically vote for Republicans in presidential elections, Republican controlled legislatures. In those States, Republican governors, they can’t get an approval rating for Donald Trump over 50%. They can’t even hit 50%. So that could easily mean that we could see state houses start flipping this year. We could see governorships flip this year. That would be huge. I don’t think we need to put a whole lot of stock in these polls right now. I know these, these forecasters, these predictors, this is how they make their money telling people what could likely happen. But we have to take it as that. This is something that could happen. Not something that will happen, not something that is written in stone.

This is all things remaining constant. As of right this second, today, this is what could happen. Things are not going to remain constant six months ago. Nobody could have predicted what would be happening in this country right now. Like even in your wildest dreams, you never would have imagined all of this happening at once. Same time, a pure, pure chaos with the way this administration is handling the virus. But it is what it is. So who knows what’s going to be happening in this country three months from now, as we get closer to the election, there is no telling, this has been a very weird year and I don’t think it’s going to get any better anytime soon. So we can’t take any of this as a given. Okay. We have to pretend like Donald Trump is winning by 20 points right now. And that’s how we have to fight. We have to imagine that Republicans are going to strengthen their, holding the Senate and retake the house of representatives. And we have to fight from that standpoint because if we get complacent and we think for a second that this election’s in the bag like we did in 2016. Yeah. Probably going to be headed for the exact same outcome. If we start thinking that way again.