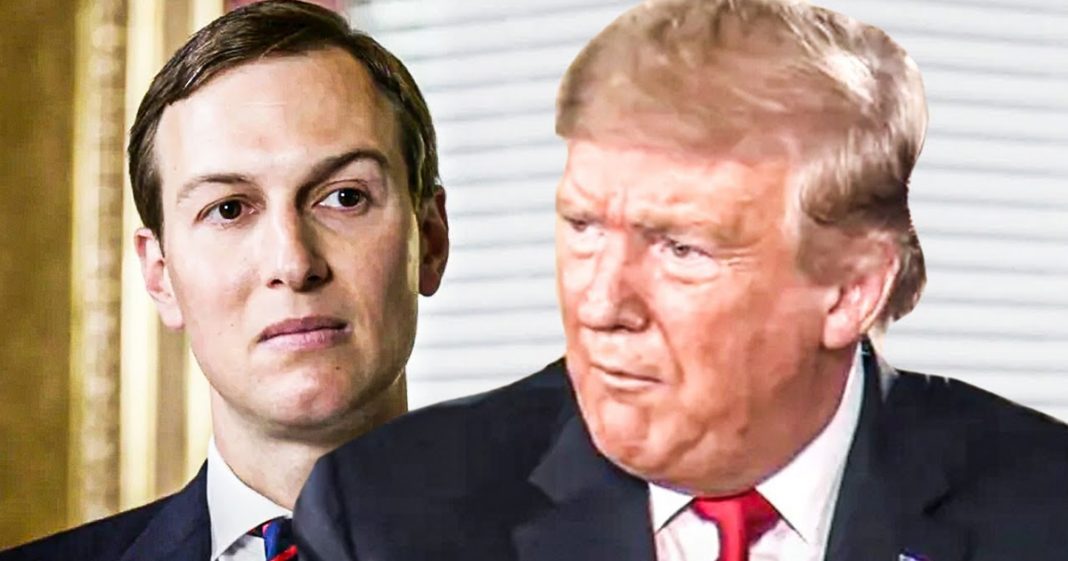 According to new reports out this week, Donald Trump’s friends and family managed to score at least $21 million from the PPP small business loan program created to help save small businesses during the pandemic. Some of these appear to be legitimate businesses, while others are clearly just cash-grabs for already-wealthy companies. Several members of Congress, including Nancy Pelosi, also had family members who secured loans from the program. Ring of Fire’s Farron Cousins discusses this.

On Monday, the Trump administration released the names of the firms who received $150,000 or more as part of the paycheck protection plan program, the PPP, which was essentially the small business loan program passed as part of the cares act. And what was discovered as groups and journalists and individuals are digging into who these companies are. Cause sometimes it’s not completely clear. Uh, what we’ve discovered is that a lot of Trump’s friends, uh, his friends, his family, uh, other members of Congress, their families, they all seem to really cash in with these low interest rate loans that, uh, the cares act provided through the PPP. You know, originally talking about these stories, it was the big corporations. Remember they’re the ones that snuck in there that your shake shacks that came in, took millions from the program, got publicly shamed to the point where they gave the money back and then, you know, ran out of money.

Cause you had so many publicly traded companies, big businesses that came in and took all the money. They did it through their little shell companies. They didn’t give it back. So Congress had to pass even more money and then Congress decided to dip their toe in the pool as well. And that is where we’re at right now. Most of the headlines right now, by the way, this is actually kind of annoying me a focus on only Donald Trump’s connections. And sure. There’s a lot of them. I mean, one of the companies that got one of these low interest PPP loans was an indoor lettuce farm company, um, of which Donald Trump jr. Is an investor. You know, we, they grow lettuce indoors and, uh, Trump jr. Is co owner of the company. They needed the PPP loan. So they could keep going during the pandemic. Now they didn’t get a whole lot of money.

I think they were probably right at 150,000. So, so yeah, I mean, they, they didn’t take a lot of money, but the biggest question is a demand for lettuce, as far as we know, did not die off during the pandemic. Right? So, so you and the indoor lettuce industry, um, I’m fairly certain you’re okay, you didn’t necessarily need the money. You just wanted the money. And that’s the problem with most of the names on the list. You know, Jared Kushner’s companies took millions. The company’s run by other members of his family, took in millions. Jared Kushner is going to profit off of this big time, especially because he was already struggling or his company was, you know, to find people willing to lend him money. Well, guess what? That our government’s always willing, especially in an, in an emergency. Here’s the thing. And this is a one of those I told you so moments. Remember when the cares act was first passed and Democrats decided to sneak in that little amendment saying, Hey, guess what? If you’re in Congress, if you’re the president, if you’re a family member of one of these people, you can’t get any stimulus money. And I said, hold up, you may remember I did the video on this. I said, hold up folks, there is a loophole here. It only says stimulus money. I’m willing to bet they’re still gonna take advantage of the PPP because that is not expressly forbidden in the language.

Hey, all of these stories are literally what I warned you was going to happen. Not proud to be right about this because it’s disgusting. Because as I mentioned, when talking about Donald Trump, jr’s indoor lettuce company, this was supposed to be for companies that had to have this money companies that could not operate. You know, the small family owned restaurant down the street. They couldn’t stay open during this. And even if they could, it was only at a limited capacity. All they could do was to go orders. So definitely that is going to reduce their income. They had to lay off staff. Whereas if they were able to secure these loans, they could probably keep paying people. Maybe not as much as they were, obviously the servers wouldn’t be getting tips, but they would be getting something and they would have a job to go back to when all of this was over.

But because these companies co owned by multimillionaire members of the Trump family members of Congress and their families, multi-millionaires because they swooped in and took this money away. Good, honest American businesses had the closer doors, small businesses, the entrepreneurs, entrepreneurs, right? The people that Republicans love to tell us are the backbone of this country. Well, you stole their fricking money. That’s what you did. You stole it legally, but you took something away that was meant for them. That’s stealing. I don’t care if it’s legal or not. You stole it from them. And again, it’s not just Trump jr. It’s not just Jared Kushner. Although Kushner is one of the biggest offenders. Devin Nunez got money for his winery. Nancy Pelosi, her family from got lots of money from this too. There’s plenty of other Democrats, not even at the national level. Some at the state level who got lots of money for their family, run businesses through the PPP program.

There’s Elaine Chao, secretary of transportation, wife of Mitch McConnell, her family’s transportation company secured quite a bit of cash off these PPP loans. And that was the point folks. It’s not just about the fact that, Oh yeah, it was a business. This is a loan program. Let’s get money. This money was to keep small businesses afloat or was it, I think that’s the question that we actually have to ask ourselves now, was this actually the point or was this actually the point to create a loan program during a time of crisis that would allow anyone and everyone access to super cheap capital. You know, maybe you want to renovate your office, but you don’t want to dip into your own savings. You don’t want to have to take out a big high interest rate loan for it. Well, guess what? You can get the PPP.

We have multibillion dollar law firms on this list, uh, including Trump’s defense attorney for more than 20 years, his law firm is on this list. They took PPP loans. And I can tell you as somebody that works closely with dozens of law firms around the country, they’re doing fine. They’re doing fine. They did not see a drop in business because of the pandemic. If anything, it’s opened up whole new avenues of litigation, they’re doing just fine. And that’s, what’s so disgusting about most of this, these are businesses that were doing just fine, but they saw cheap money sitting out there and they said, yep, that’s for me. I’m going to take that. I don’t care if Joe’s pizzeria down the street, can’t keep their doors open. Yeah, maybe they did need $250,000 to keep them going. For six months of having their doors close. I don’t care.

I grow lettuce indoors and I would like to expand my business. And Donald Trump jr. Is one of my benefactors. So I don’t think I’m going to get in trouble for anything. Go through the list of ProPublica to go to the website, pro publica.org. They have done a phenomenal job of laying this out of going through, naming the names and showing the people. Um, there’s also a link. I will tweet it out through my Twitter at fair and balanced. Um, that has a whole huge list of Democrats and Republicans who have taken this money. This money was meant for small businesses. This money was meant to keep people going during a time of crisis. But these greedy politicians and their greedy little families thought it was nothing more than free money for them to get their hands on and do whatever the heck they wanted to with it. That’s what they viewed this as. And at this point, I’m starting to think this is why Congress passed it in the first place.