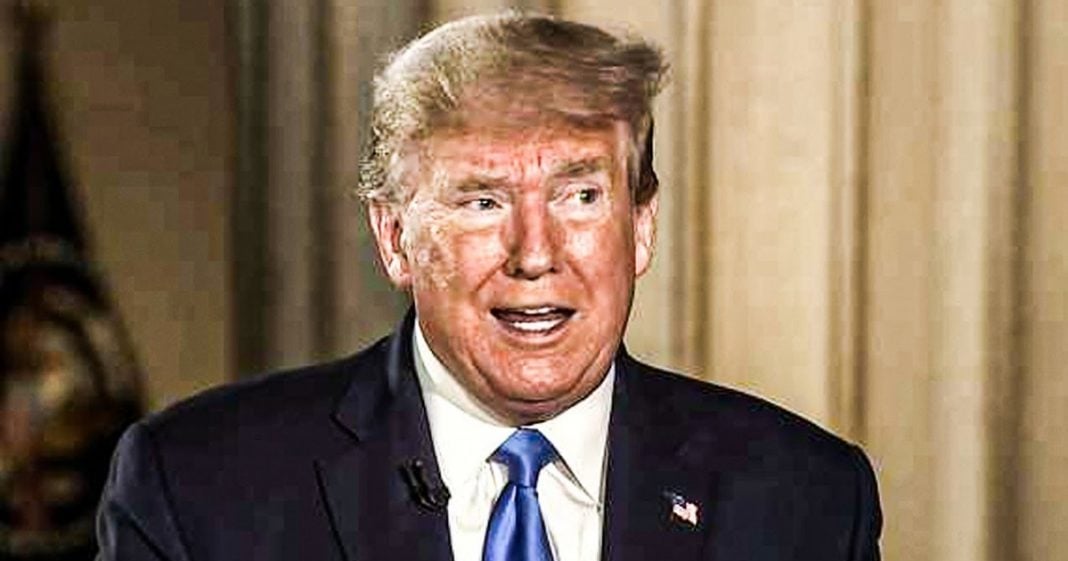 The open bigotry coming from Donald Trump is worse than it has ever been, but that’s not the main concern of Republicans right now. According to senior Republican officials in Washington, D.C., the main concern of Republicans seeking election this year is that Trump doesn’t have a coherent campaign message that they can all run on in November. They had one in 2016, but this year there is no common enemy other than their own party. Ring of Fire’s Farron Cousins explains what’s happening.

According to Robert Costa, a reporter with the Washington post concerned Republican officials in Washington, DC have been reaching out to the white house on recent days, begging them to come up with a coherent message that every Republican in this country can run on. In the 2020 election, the white house has basically responded with Trump’s going with race issues. You just got to live with that. That’s what we’re doing. That’s what we’re running on. And of course, this is leaving Republicans running for reelection terrified. Uh, that’s not exactly the kind of thing that’s going to pull in middle of the road voters. It’s going to secure your base. Sure. But it’s called your base for a reason because it’s already secured. You don’t necessarily have to have to do that. You got them, right. It’s a captive audience, but that’s what Republicans are being told.

And they’re not happy about this for obvious reasons. The key to any successful campaign, not just for a single politician, but for a party is having that coherent message. If you do not have that coherent message, you do not have a party that is on the same page. You get politicians in 50 different States run in 50 different kinds of ads on 50 different issues. Nobody knows what’s what, and that becomes a problem. When you have people running for national office, running an ad, talking about something that runs contradictory to what a person running for a local office or a state office is running ads on in that same market. It becomes confusing for voters.

But when you have a unified message, something that everybody can take and make their own. I mean, not all ads are gonna say the exact same thing, but they take it and they make it their own. You give everybody a common thing to rally around. That is your party’s message. Trump wants it to be race issues. Every other Republican running for reelection says, please, God, no, no, that’s, that’s going to hurt us. It’s going to cause people who ordinarily would probably sit at home to go out there and vote against me. So can we not do that? And the white house says, no, we cannot not do that. We’re doing it. This is happening. So just learn to love it. And of course that has Republicans freaking out. It’s 2016 Republicans had a unified message. And that message was Hillary Clinton is horrible. Hillary Clinton is corrupt.

Hillary Clinton is the worst human being you have ever seen in your life. Do you want her to be president and Republicans and moderates, even though a majority of them voted for her, the electoral college said for them, no, they don’t. We do not want her to be president. And let’s be honest. She always an approval rating of under 50%. I think throughout her entire campaign Trump’s was also under 50% and has always been under 50%. We had the two least liked candidates ever, but Hillary Clinton was clearly DC establishment, Donald Trump clearly wasn’t. And so when you’re in a situation like that, the people went with the anti-establishment person and got the worst president in history. Sorry, that’s what happened. But the message was unified and the message allowed Republicans to control the house, to control the Senate and to win the white house. That’s all they needed.

They ran on things like, do you want this horrible woman, Hillary Clinton to pick your next Supreme court justice? Because there was an empty Supreme court seat at the time. Do you want this woman, Hillary Clinton? Can you trust her enough on foreign policy? Can you trust her enough on immigration Kenya? Trust her on the economy. No, no you can’t. They told us it was a unified message. They want that again. They need the common enemy. They don’t have that. Now I know they still want to run against Hillary Clinton. They still want to run against Obama. And they’ve got a little bit of it with Joe Biden, but Joe, Biden’s staying away from things and he needs to actually keep staying away from things I have to retract. You know, my earlier comments about him eventually having to come out, don’t come out, Joe, please.

Don’t I was wrong. Don’t come out because you’re doing so much better by not saying word. They need him to come out. But even then Joe Biden has done a lot of Republican things over his career. Like, how are you going to run and say, this guy is a socialist. When in fact he’s actually closer to being a Republican than what you guys are today. That message doesn’t exactly stick when you square it up against this record, but they need something. And that’s what they want the white house to give. But Republicans, especially those seeking reelection, because you’ve got folks like Lindsey Graham and, uh, Mitch McConnell been serving in DC for 30 plus years. This isn’t your typical Republican. You know, Donald Trump is not the kind of guy that has any kind of election strategy. He’s run one campaign in his life. And by the grace of Satan, he won out of sheer, dumb luck and a rigged system against American voters.

That doesn’t mean he knows what he’s doing. That doesn’t mean he has a plan. It means that he got lucky one time lightning struck and it’s not going to strike twice. So stop looking to him for some kind of answer. He wants to go out there and be as racist as possible because he thinks it’s going to work. He thinks that we’re still in the late 1960s and telling white people that black people are bad is going to help him win like it did with Nixon. No, we don’t have the same demographics in this country that we had in the late 1960s. Thank God. We don’t have as much racism in this country today, as we did in the late 1960s, we still have a lot of it. Don’t get me wrong. There’s a lot, but not as much. And it’s not as accepted as it was back then.

So that 1960s message that Trump is running on. It doesn’t work today. And that’s why Republicans don’t want to run on it because they know it doesn’t work, but they want something because Trump is at the top of the ticket. So whatever kind of platform it is, whatever kind of unified enemy it is, it has to come from him. But as Robert Costa tells us the white house, isn’t going to budge, they have picked their message. They think it’s a winner. They’re going with statues and race. That’s it. That’s the message. Love it. Or leave it Republicans. That’s what you got. And that’s what you deserve because that’s what you’ve always been about. Well, you just never had to deal with it publicly. You know, not of course since the sixties. Uh, but you’ve been that way ever since then, you know, like Ronald Reagan with his whole welfare queen, we know what that is.

That’s coded language. That was the dog whistle. But Donald Trump put the dog whistle away and he pulled out the bull horn and he just says it. And that’s what you don’t like. You don’t like that. He just says it. You’re fine with it happening in the coded language. You’re not okay with it when it’s spoken outright, when people can understand it where you don’t have to infer any kind of meaning with it, you just know what he means because he just straight up says it. But that’s not a message you can run on in 2020, you know it, we know it, everybody knows it, but that is the message that Trump is sending. That is what he wants to do. He is digging in his heels on this issue. So my advice, you know, if I’m taking off my partisan blinders here, my advice to Republicans is stop looking to Trump.

Yeah. It’s not going to look as good for the Republican party. If you’re all going about the 20, 20 election with a different message, a different campaign, no unified messaging. But at this point, that’s the best you can hope for, because if you’re going to run on Trump’s message, then you’re absolutely going to crash and burn. Now, if I put my partisan blinders back on I 100% say yes, run on Trump’s message, absolutely stick with him because he is the leader of your party because that my friends is a recipe for disaster. It’s some of these Republicans who have enjoyed 30 plus years of relatively easy life, easy campaigns are suddenly going to find that hitching your wagon to Donald Trump was unfortunately a one way ticket.