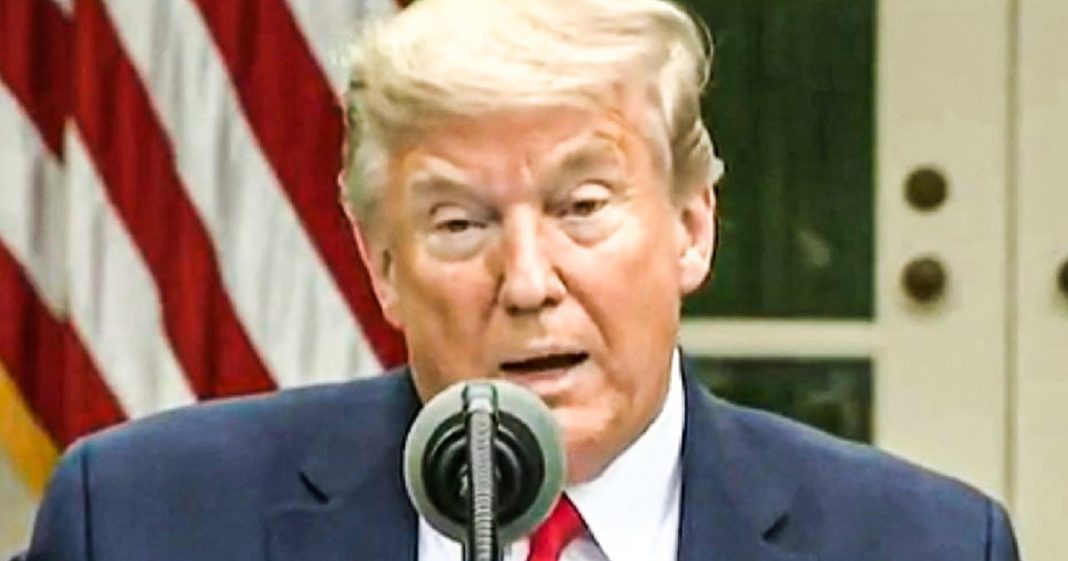 At least 5 Republican Senators have announced that they will not be attending Donald Trump’s nomination ceremony in Jacksonville, Florida in August. Skipping this part of the GOP convention is a big deal, and these Republicans have no qualms about staying home for this one. Some of them say that their age is a factor and they are high-risk for Coronavirus, while others, like Mitt Romney, are abstaining because of who Trump is as a person. Ring of Fire’s Farron Cousins discusses this.

A growing number of Republican senators have now said that they will not be attending Donald Trump’s acceptance speech that is going to take place at the Jacksonville, Florida portion of the Republican national convention coming up in August. And the reason that they’re not going to do this varies from person to person, but so far, there’s at least five Republican senators. Uh, Chuck Grassley, Mitt Romney, Susan Collins, Lisa Murkowski, and Lamar Alexander who say that, sorry, but we’re just not going to be able to make it now for people like Grassley. Grassley says, listen, I’m over 80 years old. I am high risk for coronavirus. And this thing down in Florida, we we’ve seen the numbers come out of Florida. Uh, yeah, I’m not going there. And that’s true. And that’s, you know, good on Grassley because the state of Florida here, uh, we’ve, we’ve, we’ve kind of let ourselves go really, to be honest with what’s happening with the COVID-19 cases.

As we have seen more than a 50 or 60,000 in just the last seven days, we hit over 11,000, just a couple days ago. Um, we’re doing very bad and it’s only getting worse. We do not have it under control. Our governor announced just a couple days ago that heat on care. We’re opening schools in August, uh, which puts my children. Everybody’s children in the state at risk. My wife is a teacher, so we’ve got even more risk. Basically. I would be the only member of my family, not going into a crowded school every single day. So a pretty much a given at that point that somebody is going to end up bringing this thing into my household. And Chuck Grassley wants to avoid that in his household. So he says, I’m not going good for you, Grassley. I’m glad you have that choice because that choice has been taken away from the rest of us, actually living in Florida, as for some of the other folks, they’ve made it clear that it has nothing to do with the Corona virus, has everything to do with who Donald Trump is as a person.

Now that’s just the kind of thing. They simply cannot. They cannot under any circumstance condone. They don’t want to be a part of it. They don’t like the guy. They don’t like what he is allegedly doing to their party, which the only thing he’s doing to their party is exposing what they have become. You know, typically they were able to kind of gloss over the people like Trump and the party. But as soon as you put them at the top, Whoa, my God, that exposes all of the rot within the Republican party. And they don’t want to be a part of that. And all of this, by the way is going to hurt Trump’s feelings. It doesn’t matter what their reasons for skipping the convention are. It could be because of the virus. It could be because we simply hate you. It could be because, Oh shoot, I scheduled a family vacation at that time.

I’m sorry, I can’t come. Trump’s going to be pissed. And he’s going to make sure that they know he is pissed. Some of them may end up caving, you know, Collins, Murkowski though. Those kind of seem like the people who are totally willing to cave. Cause they’re like, no, I’m not going to this thing. If Trump calls them out one single time, they’ll be there. They will be there front row center, not wearing a mask, hugging and shaking hands with as many people as possible just to make sure Trump has happy, but they’ll tell their constituents, Oh, I hated every minute of it. I didn’t want to be there. Now. These two are the biggest flip-flopper as you know, the biggest, uh, flim-flammery really because they’re con artists, Murkowski and Collins. They like to portray themselves as I’m this great moderate. I’m a great independent thinker.

Nobody tells me what to do. And then Trump yells at them and they’re like, Oh, sorry, sir. We’ll, we’ll do whatever you need us to do. Don’t worry about that. I’m so sorry. I fell out of line there. They’re complete frauds. And that’s why, at least in the case of Susan Collins, she is the least popular Senator in the United States right now because she stands for nothing. She stands for whatever the people in power tell her to stand for. She is like literally the exact opposite of the great independent, moderate thinker. She is whatever people will tell her to be. She’s a puppet. That is what she is. So she may end up attending the convention. But my guess is that as the numbers in the state of Florida continue to rise. We’re going to see more Republicans say, sorry, but I’m not going to be able to make it.

Now we’re going to see some folks that it wouldn’t matter. A Florida jumped up to 100% infection rate. They’re going to go Matt Gates. He’ll be at that convention in Jacksonville and good for him. I want him to go. I want Matt Gates to go there and walk around the crowds and mingle with people and you know, do the normal Matt Gates type thing, because that’s, I think what, what should happen along with many other politicians from the state of Florida, Rick Scott, Marco Rubio, our governor, Ron DeSantis. I hope you are all present in Jacksonville as well. But here’s the good thing for the Republicans in the Senate who were already growing a little bit tired of Donald Trump’s bigotry and the ones who see that Trump is actually hurting their reelection. Chances, you have it out. You have an out right now that you can use to skip this convention to not have to go there, to not be seen.

And of course, to help reduce your risk of catching this virus use the virus has the excuse. We know you hate Trump. We know you knew. So you could just say, do it diplomatically and say, listen, the numbers are getting bad there in Florida. I can’t risk it. You know, I either I’m high risk make up a relative that doesn’t even exist and say, Oh well, they’re high risk. And I’m going to see them right after the convention. We don’t care. Nobody’s going to check up on that. Kind of all we want is for Donald Trump to be staring at an empty room with nothing, but maybe Matt Gates out there in the audience, clapping wildly tears rolling down his face because he’s so in love with Donald Trump. That’s what should happen. That’s what Trump deserves. But also we, the people of the state of Florida don’t deserve to have all of these hundreds or thousands of people come down to our state when we’re already suffering.

So greatly from this pandemic, give us a break, give the people of Jacksonville, a break. They’re the ones who have said you, the polls have shown. They don’t want you to come there. Anyway. They may have been okay, you know, with protesting against the mandatory mask order in their city. But when it comes down to it, they do understand that the virus is a threat, that the virus is a risk and they do have to do some kind of risk mitigation. And the polls show that one of the risk mitigation things they are willing to do, if they’re not willing to wear the mask, they’re darn sure. Willing to say, please don’t come here for the Republican convention. We don’t want you. That is a majority of the people in Jacksonville, by the way, who have said that Trump doesn’t care. He is coming down to Jacksonville.

He is going to give his speech. And again, we got a month or so until that happens. And I predict I embedding. We are going to see more than just those five Republican senators say, sorry, but I can’t make it. And again, any Republican Senator, Republican politician really out there who wants an out, who doesn’t want to go to this giant hate rally, which is what it’s going to evolve into. You have the out Florida is not a safe place. The visit right now. This isn’t where you want to be. You could very easily catch something here that you could take back with you and start a whole new surge and virus cases. Wherever you take it back with you don’t do it. Don’t risk it. It’s not worth it. Trump’s not worth it. Your life, the family, your family members lives. That’s not worth it. It’s not worth it. Yeah. Trump will be pissed, but in a couple of months, based on current polling, his personal feelings towards you, aren’t going to matter one bit.