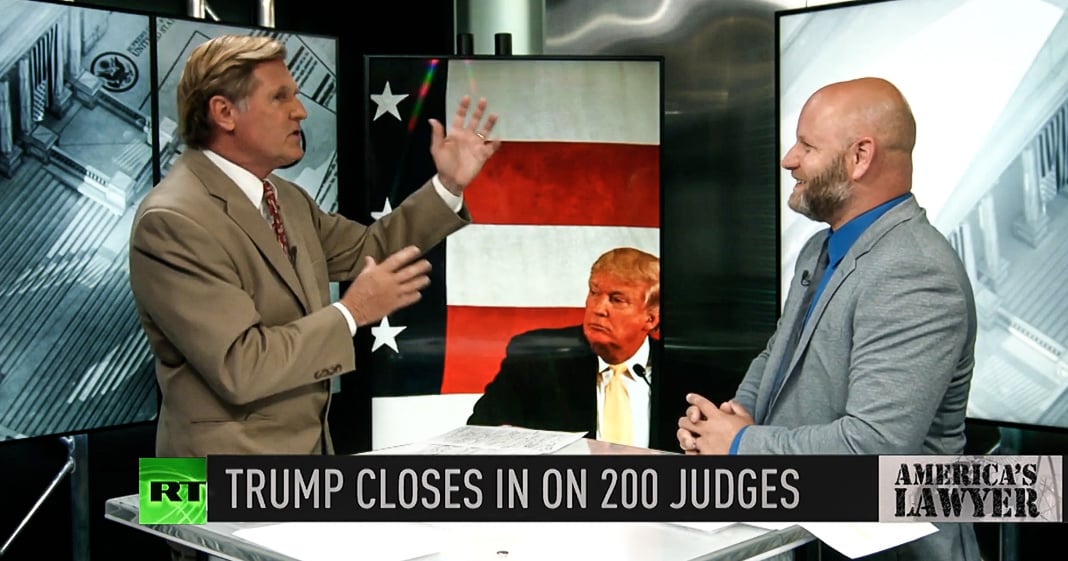 VIa America’s Lawyer: President Trump is just one judge shy of 200 confirmations, which could cement his legacy in federal courts for the foreseeable future. Mike Papantonio & Farron Cousins discuss. Plus, RT Correspondent Brigida Santos joins Mike Papantonio to explain how amendments to the Volcker Rule will allow big banks to resume the kind of risky investments which led to the 2008 financial crash.

Mike Papantonio:             President Trump has now put 200 federal judges on the bench, more than half of the 329 judges Obama appointed through eight years, McConnell’s helped Trump make this a reality. I have Farron Cousins here to talk about this. We’ve been talking about this for years and we, here’s, here’s the irony here. I guess it was what, I mean 10 years ago we were talking about this story, we said, why won’t the media pay attention to it? They’re so worried about who’s going to win a Senate seat. They’re so worried about who’s going to win a house of representative. Who’s going to be the president? They’re, who’s on the Supreme Court? And they ignore the obvious. These federal judges make any kind of law passed through Washington, they can make it go away. And that’s a problem here. Right?

Farron Cousins:                  Well it is, and right now we have 20%, a little over 20% of the entire judiciary in this country are Trump slash Mitch McConnell judges. That, that, that, that’s the number we’re looking at here. And people aren’t taking that seriously because the only number they care about right now is two, the number of Supreme Court judges that Trump has gotten. And those two, yeah, they can do bad things, but those two can not do nearly as much damage as the, you know, 200 that he has put out there throughout this country. And even today, Mitch McConnell and this is all by the way, I believe this is firmly all Mitch McConnell’s doing, Mitch McConnell is pushing these judges through at an alarming rate because Chuck Schumer worked out deals with him and said, we’ll let you do these judges, if you give us this or that.

Mike Papantonio:             Okay, let, let me tell, let me tell the backstory here. This is what everybody misses. It was the Democrats that did away with the 60 vote margin.

Mike Papantonio:             You understand that? The Democrats did that and when they did it, everybody was saying, you idiots, don’t you understand this is going to be turned around you idiots. And if you do this, we’re going to see it rise up in the future and that’s what’s happening. And so the Democrats are going to say, oh my God, what did we do? There are running around, like with their hair on fire. The truth is they created this atmosphere that’s allowing all this to happen. Mitch McConnell, the turtle man, I can tell you, his goal is appoint young people, 30, 35 year olds that are going to be there their entire career. Most of which have very little judiciary background. They have very little capabilities. They, you know, when you take a look at them, most of these guys have never even, most of the people never been to trial. They’ve never, they’ve never tried a case and they’re moved into federal judiciary.

Mike Papantonio:             Here’s another thing we’ve talked about till ad nauseum, I mean, we always talk about this. The, the, the, even on this article, you know what this article focuses on, it focuses on social issues, LGBT, work, you know, it doesn’t, it doesn’t, it doesn’t even focus on where they really do us harm. They do us harm because of everything they give to wall street. They do us harm by letting pharmaceutical companies kill people by the gazillions, without any kind of repercussions. They take away, they defraud mom and pop pension programs. On those issues these, these judges are there to help big business, but it’s this, it’s this idiocy that we see, even with reporters who should understand, it’s not about social issues. It’s about issues that affect mom and pop’s ability to eat and pay the rent. Right?

Farron Cousins:                  Right. We had, you know, two very big social issue victories from the conservative controlled Supreme Court in the past week. You know, so, so those are okay. They are for the most part protected by precedent. It’s these issues where you have the big class actions against these billion dollar corporations, judges are destroying those.

Mike Papantonio:             Which we’re going to see later in the show, Kavanaugh, you know, predictable Kavanaugh went after this. Took away rights for consumers.

Mike Papantonio: Bank stocks are surging now that the federal reserve and other regulators have finalized an amendment to the Volcker rule, the rule was implemented in the aftermath of the 2008 financial disaster to protect bank customers. RT’s Brigida Santos joins me now to talk about that story. Brigida, this is deja VU, right? I mean, you know, did we not learn anything? Have people forgotten that the banks led us to the edge of the abyss and right into the center of the abyss. For those who don’t remember what the Volcker rule, Volcker rule is, tell us about it.

Brigida Santos: Well, the Volcker rule was approved in 2013 to prevent banks from engaging in risky investments with their own funds, which is what led to the 2007, 2008 global financial crisis. It also barred banks from sponsoring or owning hedge funds and private equity firms. The rule can also be found under section 619 of the Dodd-Frank wall street reform and consumer protection act, which imposed comprehensive regulations on financial markets and established new government agencies, including the consumer financial protection bureau. But under president Trump, Dodd-Frank regulations have been slowly rolled back over claims that they make the US less competitive than their foreign counterparts.

Mike Papantonio: Okay. So here we have a situation where we know, we’ve already seen the history. We’ve seen what happens when banks are allowed to go to Vegas. That’s the term. They, they go to Las Vegas. Basically they go to Las Vegas with, with taxpayer money, because we have to bail them out, right? They go to Vegas with mom and pop money who have everything counting on that bank doing, you know, being able to stay alive. And so they, they simply take these risks because of one reason, people at the top management want to make as much money as they can and to hell with everybody else. That’s their, that’s their attitude. So the Volcker rule is put there to fix it. How might this new amendment impact the public, Brigida?

Brigida Santos: Well, the banks and the people with a lot to gain on wall street are going to see this as a win. They love it, while critics down on main street see these rollbacks as more evidence that the US is a plutocracy. You know, average and poor Americans are still struggling with the consequences of an unprecedented economic crisis due to the COVID-19 pandemic. Meanwhile, the rich keep getting richer because they have better lobbyists. Wall street interests have long sought to weaken the Volcker rule and when these changes take effect on October 1st, it’s going to be a lot easier for banks to make risky investments in venture capital funds that don’t benefit customers, yet generate profits for themselves. Without oversight, as you said, history could absolutely repeat itself since these activities are what led to the crash of 2008, which let me remind you was the worst economic disaster since 1929. This decision could jeopardize the entire financial system, which is already teetering on the edge due to the economic consequences of the pandemic. As you said, they’re going to the casino, but unfortunately they are the house. So it’s not great for everybody else, but it’s great for them.

Mike Papantonio: Yeah, so the, the, the federal reserve has purchased corporate debt for the first time. This is very significant. They purchased corporate debt for the first time ever as part of the response to the coronavirus. And, and you can’t avoid the question and, and if you’re in the market, you need to take the very seriously. Is this the next bubble? Do we have these, do we have these same thuggish predator bankers looking for a quick fix? Where they make billions of dollars, build their mansions, buy their yachts, buy their jets and then everything goes belly up and they don’t, they don’t go to jail. They don’t have to give anything back. Life as usual. What’s your call?

Brigida Santos: Yeah. Companies have amassed record amounts of debt during the pandemic due to stay at home and social distancing orders. The entire supply chain has been affected by this and in response, the fed began buying individual corporate bonds and corporate bond ETFs aimed at restoring liquidity to credit markets. Now the central bank says it plans to buy debt from nearly 800 companies, while some of these businesses are absolutely struggling due to the pandemic, others are not including Walmart, Coca-Cola, AT&T and McDonald’s to name a few. And prior to the pandemic in 2019, companies were already borrowing far more money than they could ever pay back. In fact, last year, corporate debt hit nearly $10 trillion. That’s a record 47% of the economy. Now the fed is trying to clean up a mess that has only gotten worse during the pandemic, but started a long time ago. And experts now worry that if the fed keeps flooding the market with emergency bond purchases, the central bank could end up creating the greatest financial bubble in history. And again, it’s not going to matter to them because they’re going to get those bailouts.

Mike Papantonio: You want to have some fun, go on the internet and check out how many billionaires were created out of the 2008 burn down by banks by this, this corrupt conduct. They all were billionaires. They left mom and pop out to dry, and then taxpayers had to end up paying for their jets and their mansions and their yachts. But today nothing’s changed. They live in those same mansions. They drive those same, you know, jets. They drive the same yachts. Nothing changed. Nobody went to prison. So, hey, what the heck, why not try it again? Brigida, thanks for joining me. Okay.