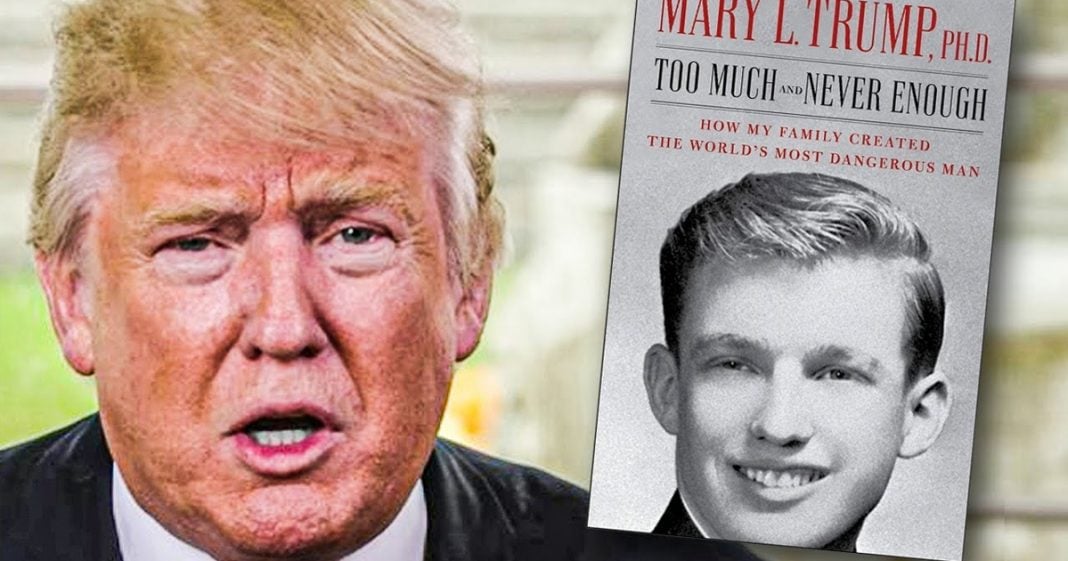 Many members of the press were sent their copies of Mary Trump’s new book this week, and the revelations that Mary makes about her Uncle Donald are startling, to say the least. Among the claims that Mary makes are that her uncle, the President, could actually have an undiagnosed learning disability and that he had another man take his SATs for him to get into college. Ring of Fire’s Farron Cousins discusses these new claims.

Members of the press started receiving their copies of Mary Trump’s new book too much and never enough this week. And after they sunk their teeth into it, they decided to sell a, share some of the juiciest tidbits with the American public before the book is even released one of those things. And we’re going to talk about a couple, but, but one that really stuck out was the fact that according to Mary Trump, uncle Donald serving as president of the United States right now might actually have an undiagnosed learning disability. And here’s the thing about this claim. There’s nothing wrong with having a learning disability. It does not mean that someone is stupid. It does not mean that they’re incapable of functioning. It just means that sometimes things take a little longer for them, or you have to try new approaches to get them to absorb material. But Donald Trump is a dangerous person with this kind of learning disability.

If in fact it does exist because he refuses to admit that he has it. And if you’re not gonna do anything to fix the problem, if you’re going to sit there and act like it doesn’t exist, it is going to get worse and it is going to end up harming you and anyone around you, any decisions you make are going to affect those people around you. In the case of Trump, the decisions he makes affects everybody here in the United States, because he is unfortunately the president. So that is something very serious that needs to be looked into. Although of course it never will, but here’s one of the reasons we should also take Mary’s word for it on this. Mary has a PhD in clinical psychology. Okay? She’s not just some angry member of the Trump family trying to insult her uncle. This is actually what she does, right?

She, she has a PhD in this. She is a doctor. She knows what she’s talking about. Not only has she studied these kinds of things, but she has known this man for her entire life. I think in this particular instance, we need to give her the benefit of the doubt. And along the lines of allegedly having this learning disability, uh, Mary Trump goes a little further with it and says that this is part of the reason why Donald had to will actually her daddy or granddaddy in her case, Fred Trump Donald’s dad had to pay somebody, man, by the name of Joe Shapiro who died in 1999. He was, uh, in the legal department, uh, actually very, very high up, uh, with the Walt Disney corporation, but he had non Hodgkin’s lymphoma passed away 1999, but Joe Shapiro was paid allegedly by Donald Trump’s father, Fred Trump to take the SATs for Donald Donald wanted to transfer out of Fordham university in the Bronx, wanted to go to Pennsylvania’s Wharton school, didn’t have the grades to do it.

So they allegedly had this other kid, Joe Shapiro, who was known to be a great test taker, very smart kid. He was in fact, the stable genius that Donald Trump always likes to think that he is, they had Joe go and take the test for Trump, according to Mary. And this was actually, you know, back then, it was a little easier to get away with things like this. You know, if you register to take the SATs or act or any kind of, you know, standardized test today to get into college or a, uh, a secondary, uh, degree graduate school, you have to submit a picture of yourself. The picture is on your printed out a pass to get in there. You also have to show your photo ID. Those things didn’t exist back then. You didn’t have your photo on your license. That wasn’t a thing that didn’t come about till later.

So it was very easy or would have been very easy for Joe Shapiro to walk in there and say, Hey, my name is Donald Trump. Here’s my social security number. I’m here to take the sat a hope I do well trying to go to Wharton. Let’s see what happens. Um, and as I mentioned, unfortunately, mr. Shapiro did pass away in 1999 from non Hodgkin’s lymphoma. So this is not a claim that we can actually, uh, really verify, you know, the guy who allegedly did it is dead. So we won’t know, but this has obviously put a spotlight back on Wharton school, on Donald Trump’s transcripts. We do know that Donald Trump never made the Dean’s list while he was out Wharton. In spite of the fact that Trump tells us he was a great student, but we could also possibly, and this isn’t even necessarily a hundred percent, but if we did have access to his grades and to his sat scores, we could see if there is any major discrepancy between the two, you know, because if he did like super great on his SATs, but then made, you know, D’s and F’s in college, okay.

Probably makes it more likely that somebody else took the sat for him. Although, again, that’s not necessarily conclusive proof. You look at my act scores. I did awesome in college. I slacked off a bit and my grades probably wouldn’t necessarily in my early years of college, at least, well, middle years, they probably wouldn’t reflect what my actsh uh, test score was. Nevertheless. Um, that is one thing we could see, and it might give us a little bit of a better picture, but that’s not necessarily the story at the moment. The story of the moment of course is Mary Trump’s book. You know, she makes all of these explosive allegations and you know, one of them, obviously we said Trump could have a possible learning disability. He allegedly had this kid, Joe Shapiro take SATs form so he could get into Wharton. And what else lose a massive list.

And this isn’t even everything. And by the way, if anybody is interested, this book is coming out on Tuesday. It’s too much and never enough. Um, so here here’s some other revelations. When the family visited Donald Trump at the white house, he said, the place never looked better since George Washington lived here, George Washington never lived in the white house. Okay. Well, look, Trump is not the smartest guy out there. We know that. So that doesn’t necessarily affect his ability to govern, not knowing that George Washington never actually lived in the white house, Donald Trump’s sister Maryann. Now a retired federal judge who did his homework for him when he was at Fordham said, when he ran quote, he’s a clown. Okay. The clown thing, whatever. That’s fine. My sisters would probably say that about me, about certain issues, as I would say about them, about certain issues, but hold up, Whoa, Whoa, Whoa.

You did his homework for him when he was at Fordham folks, do you understand like if any of these are provable, this could cause Donald Trump to lose. Uh, and I know it’s way after the fact, but nevertheless, this means the dude, technically wasn’t able to actually graduate from college. Okay. That’s what these accusations really mean. That’s what we have to take seriously. And I guarantee you, these colleges are probably going to take it pretty seriously as well. It’s really, really cool to have an alumni who’s president of the United States, not so much. So when you find out that that dude didn’t do any of his own work to either get into the school or once he was in the school, then it becomes an actual problem for you. So hopefully these colleges, both Wharton and Fordham are taking these accusations very seriously. Uh, she goes on, uh, the president was molded by a horse family environment.

A casual dehumanization of people was commonplace at the Trump dinner table. That sounds about right. Uh, Donald Trump has consistently dehumanized people, uh, ever since he came into public life. They’re, they’re not people they’re they’re tools, they’re props, they’re things that he uses to advance his own agenda. Uh, the media failed to notice that not one member of Donald’s family, apart from his children, his son and lone, his current wife said a word of support of him during the entire campaign. That’s that’s an important thing. Where was the sister? Where was the older brother? Where were the ex wives? Where was anybody that has spent any kind of time with this man to say, Hey, you know what, he’s a good guy. He should be president of the United States that didn’t exist. And that should have been a big red flag, not just for the media, but for everybody in this country.

Um, this is a direct quote from the book to this day, the lies, misrepresentations and fabrications that are the sum total of who my uncle is, are perpetuated by the Republican party and white evangelical Christians. That is actually something we don’t even need more proof to verify. We know that the lies, the misrepresentations, that’s not just on Trump. That is on the entirety of the Republican party, including the evangelical phoneys who have embraced and endorsed this man. But this is what we’re looking at. Again, there’s plenty more revelations out there. The book has coming out Tuesday. If anybody is interested, uh, typically I try to avoid these kinds of gossipy things, but I gotta admit this one has my attention. Um, not because it’s giving us any information, that’s necessarily prosecutable, but it’s giving us a glimpse into the psychology of Donald Trump and why he is so dangerous and possibly how he has been so successful at convincing the public that he’s not dangerous.