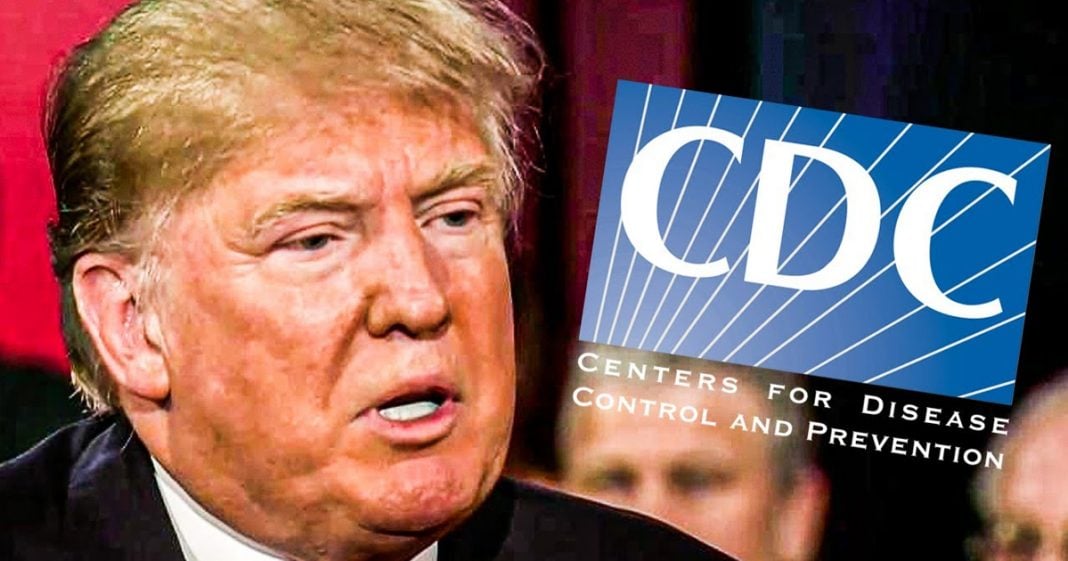 The Centers For Disease Control And Prevention has come out publicly and said that we need to consider alternatives to voting in person during this pandemic, and that will likely include the general election in November. Donald Trump has made it clear that he will oppose any efforts to get a universal vote by mail program in place, but that doesn’t mean it can’t happen, especially with the CDC’s backing. Ring of Fire’s Farron Cousins discusses this.

Since may Democrats in the Senate have been asking the centers for disease control and prevention for guidelines, to be released, explaining to election officials across the country, how they can conduct safe elections during a pandemic. And that is something obviously that is sorely needed. You know, we are not on the downswing of new infections here in the United States. In fact, our numbers are getting worse by the day and in certain areas. And unfortunately, a lot of those happen to be, you know, vital States down in the South for whoever wants to be president. Things are getting so much worse. Uh, you have Florida and Texas, and then over in the Southwest Arizona, all three of which, uh, could end up being in play in November’s election. All three of which have engaged in some kind of forms of voter suppression over the years. And so obviously these States are going to be crucial to anybody hoping to be the next president of the United States, even Texas AA, typical or not typical, but a solid red state is now considered up for grabs.

But how do you do it in the middle of a pandemic? Well, luckily the centers for disease control did in fact release their guidelines this week. And it says contrary to what Donald Trump is telling everybody come up with something other than in-person voting, which by the way, the only real alternative to that is vote by mail. Now they did offer, obviously not everybody can or wants to vote by mail. Some people really do enjoy the experience of going to the poll and casting their ballot right there. Maybe they don’t trust, vote by mail. Maybe they just like to make it a big presentation. To be honest, I have in the past, uh, every time I go vote, which I’m definitely not going to be able to do it this year, but every time I’ve gone to vote, I’ve always taken all of my kids with me.

You know, a little bit of a civics lessons. There’s an election. You vote. End of story. You don’t sit them out. You get out there and you actively participate. They like it. They get little stickers too, even though they don’t vote, they still get an I voted sticker. It’s great. Um, but the CDC says, we need to cut back on this. We need to cut back on people going in, in person. We might need to open up more polling places to avoid crowds. People need to bring their own pens with them. Cause we don’t even need to be sharing pens. They need to wash their hands before and after going into the polling place. But if possible, do remote voting, that is the safest possible way to protect American voters and to prevent our numbers from skyrocketing a week or two after election day. That is what we have to do.

This is a direct rebuke of Donald Trump and attorney general William Barr, who both for the few months have been telling us that vote by mail is rife with fraud. That’s simply not true. There was no evidence to back that up. And now we have the science people telling us that this is the only way we can prevent a massive spread. You know, maybe by November, we get this thing under control, but we don’t want the second wave to show up because States or cities reduced the number of polling places and crammed a couple thousand people into a crowded gymnasium waiting to cast a ballot. That’s not okay. The CDC is telling us this right now. They’re letting us know here in July, you can’t do those things. So my advice to everyone right now is that States across the country are in fact changing their guidelines as to who is eligible to vote by mail.

And many of these States have changed it to where fear of contracting COVID-19 is in fact, a valid reason to request an absentee ballot or vote by mail ballot. Um, look into what your state requires and vote by mail. If you can. And if you can’t sign all the petitions, asking your state to allow it, we need more people out there voting. We need a participatory democratic system because if we do not get more voters, if we do not have more participation, then those same politicians that everybody likes to bitch about all the time on both the right and the left, they’re going to stay in power because it’s just going to be the same people voting every single time. Let’s expand it, let’s get more people active. And at that point we could end up with a whole new crop of politicians in DC, maybe sums that we won’t, uh, some of them excuse me, that we won’t complain about quite as much.