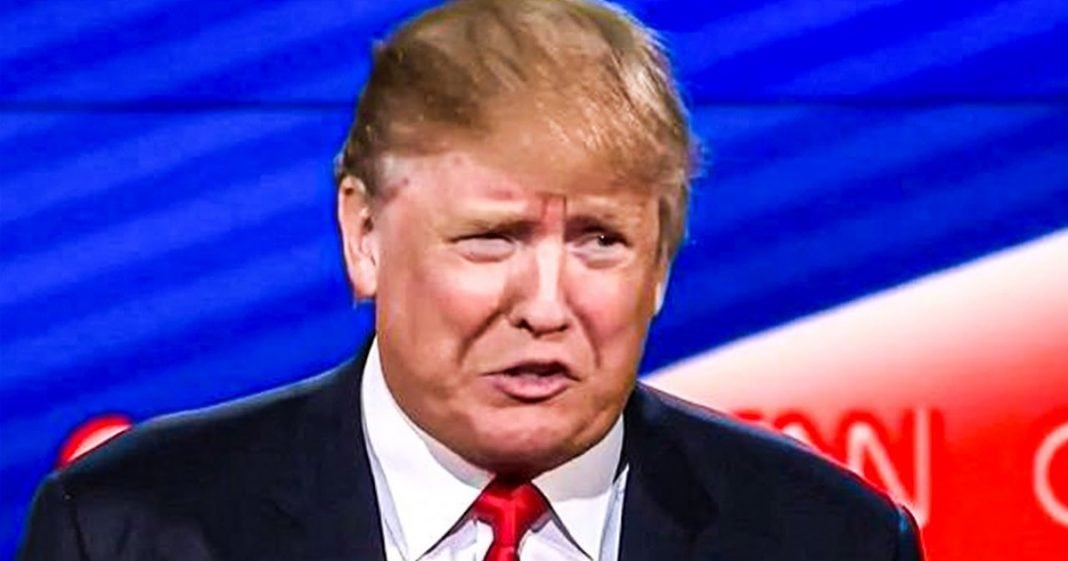 Donald Trump is trying to find a hill upon which to lay his campaign, and so far all of his attempts have failed. And his campaign team isn’t thrilled with his latest crusade of protecting statues throughout the country because they understand that most people really don’t care about this issue. But Trump is in charge now, and this is what he’s chosen, and his team is left trying to figure out if anything at this point is going to save his campaign. Ring of Fire’s Farron Cousins discusses this.

Republican advisers and donors, and even sitting Republicans in the house and Senate, uh, have expressed concern in recent weeks over the fact that Donald Trump’s 2020 reelection campaign doesn’t actually have a message. There is no theme. They’re not offering people any reason why they should vote for Trump again. And even in recent interviews on at least two separate occasions on two separate networks, Trump has been unable to answer the question of why should people give you a second term? What do you want to do in a second term? And he can’t answer, but now Donald Trump who has taken on a more hands on approach to his reelection campaign, he thinks he’s come up with the message as to why you should vote for him in 2020, why you should give him a ten second term. And the reason is because statues, cause we got to protect these dang statues here in the United States folks, because these violent liberals are tearing them down left and right, and quote, erasing history. And his campaign staff has terrified because they believe that this messaging that this being the Hill he chooses to die upon is absolutely ridiculous. They think this is stupid because they understand that the polling on the statue issue doesn’t show that people give a damn one way or another

Because honestly, folks, they don’t, unless you’re like a huge racist out there defending these Confederate monuments, uh, you don’t care. That’s kind of what happens all over the country. You might care about it briefly for a moment, but then that moment passes. You’re not out there, you know, campaigning and protests. They protect the statues because it doesn’t affect your daily life any way whatsoever. It never has. And it never will. It’s just a statue that’s out there that sometimes you drive past it and you’re like, Oh, there’s the statue. If suddenly one day it wasn’t, you’d be like, Oh, there’s no statue. That’s it? That is how most Americans view the statue issue. Unless of course you believe that it truly does represent your heritage. In which case that’s not something to be proud of because these, the ones that we’re talking about, these are the Confederate participation trophies or they’re ones that were built on stolen land, stolen, sacred land from natives here in the United States. Okay. But Trump thinks this is the issue and his campaign thinks he’s gone insane because of it. One campaign staffers on the record of saying the question now is, is the statue shit going to work?

And they know the answer to that. They know the answer is no, but now that Trump has decided, this is going to be his message. This is what he’s going to sell. They all have to go out there and act like the statue thing is the biggest facing the country today. Forget for a moment that we’re in the middle of a pandemic. Forget also for a moment that we have mass protests here in the United States because police officers won’t stop murdering African Americans in this country. You know, those are real issues. Those are actual things that need to be addressed. What about the economy? We’ve lost 46 million jobs. We got what, 4 million of them back, but we still have a net loss of 42 million. That’s a problem. Probably need to be working on those jobs, right? No. Trump wants to talk about statues. And so his staff has to talk about statues and they have to go out there and try to pretend that old Neo liberal Joe Biden is somehow a crazy member of Antifa out there being violent and calling for mass hysteria.

And of course the destruction of statues, most people don’t care if the statues go, most people aren’t even aware that the statues are there. I mean, that is how insignificant the statues truly are. And if they were offensive, let’s just get rid of them again, because nobody cares that they’re there, but they do care. If it is celebrating oppression, it should go. I can’t believe we even have to have a discussion about that. The Confederacy lasted five years. It was a true Vera treason to the United States itself. Why celebrated? Why try to act like that’s a thing that we need to be reminded of with a statue when we’re all taught about it in the history books, put more money into teaching history and less money into preserving these statutes. But for Donald Trump, Hey man, keep hitting on it on it, on your campaign because your staff is right. This is a stupid issue. That’s not going to unite people behind you because they understand nobody really cares. If the statutes get torn down.