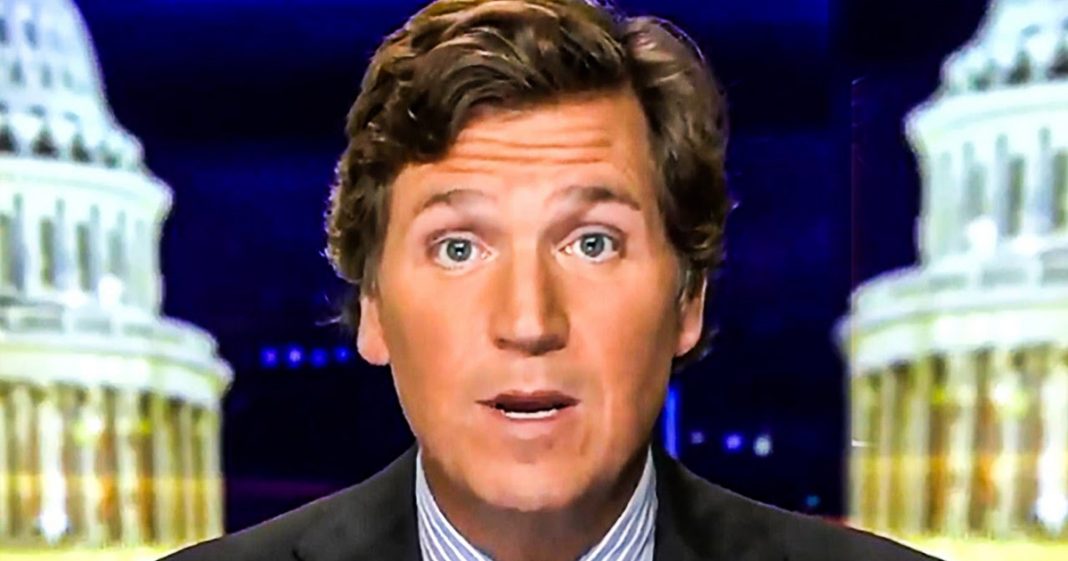 We’re not even finished with the 2020 Presidential election and Republicans are already looking ahead to 2024. And the man that they think can move the Party into the future is none other than Fox News host Tucker Carlson. With his embrace of “Trumpism”, Carlson has rocketed to the top of the cable news ratings, and Republicans believe he can parlay that success into a national electoral victory. Ring of Fire’s Farron Cousins discusses the insanity of this idea.

Even though we’re not even to the 2020 election yet. I mean, heck we’re not even to the actual nominating conventions yet. Nevertheless speculation is already out there about who is going to be the candidate for which party in 2024. Now as for the Democrats, we’re not exactly sure. Right? I mean, if Joe Biden does win this election, obviously he becomes the favorite to be the nominee in 2024. It will be very old. So who knows, but on the Republican side, no matter what happens this November, um, it’s up for grabs Trump can’t run again. Mike Pence is, uh, probably not going to run and in today’s Republican party, it doesn’t look like Mike Pence would even have a shot anyway. So who takes that mantle? Who becomes the Republican front runner during the last possible four years of a Trump administration or the first four years of a Biden administration who is going to carry on the mantle of Trumpism and fight back against those dang oppressive Democrats.

And according to some Republican strategists in a new Politico article that can only be described as terrifying, the person who fits that bill the most is Fox news host Tucker Carlson. That is in fact, the name ladies and gentlemen, that these Republican strategists are throwing out as the early front runner for the Republican nomination in 2024, they think Tucker Carlson could be the guy. And here’s why as it stands right now today, Tucker Carlson has the highest cable news ratings in history, not just highest ratings right now, not just highest ratings this year, highest ratings that any cable news host has ever gotten ever, ever. And that’s terrifying in and of itself because Tucker Carlson’s racist, but he’s attracting all the racists to his program. He’s also occasionally pretending to be an economic populist. He occasionally pretends to be antiwar. So he does get, uh, some folks from the left sympathizing with him on certain issues, except he’s a huge racist and we shouldn’t be sympathizing with him on anything.

There is no common ground when you’re dealing with people that are openly bigoted. Uh, so I’m firmly in that camp of no, it’s not cool to go on Tucker Carlson show. Uh, you’re not convincing anybody of anything, but I’m also, if other people want to do it, that is their choice. I’m not going to tell them they can’t. I just personally don’t agree with it, but that’s neither here nor there. What is, is the fact that Tucker Carlson actually could have a fairly decent shot of winning the nomination, possibly even becoming the next president of the United States. That’s something that we need to wrap our heads around right now because here’s the thing. Folks, we in the progressive media, even in the conservative media, uh, have focused a lot in the last few years on Tucker Carlson’s overt racism that he displays on his program. You know, the folks at media matters have done a phenomenal job of outlining this of, of exposing it, of keeping it out there of, you know, helping with these advertising boycotts, calling them out on social media. He’s lost a lot of advertisers from it, but

Apparently it’s only made him stronger. And since his ratings are still not even what, not even 1% of the U S population actually watches them, they don’t know about it. That’s the worst part about it. Even if he had, you know, three to 4 million people watching him every night, which he’s not quite there yet. You’re still talking about what 1% of the us population that’s 99% of the population that are not really familiar with Tucker Carlson. They don’t know about his racism. So he can go out there, run for president. And it’s only going to be a small minority of people saying he’s a racist, he’s a racist. We got the evidence to back it up, but if they didn’t care back, then they’re not going to care. Now, if they don’t care about it with Trump, they’re not going to care about it with Tucker. That is why any kind of story like this that comes out. We do have to unfortunately treat as very serious because Tucker Carlson, as political pointed out has not only embraced Trump himself, as many of the other people in the Republican party have done embraced Trump. I love Trump. I like him. Tucker is one of the few that has embraced all the policies.

Okay. And he loves them. Trump is at the point. Now, as reports have said, he’s actually calling Tucker Carlson for advice. He’s not calling his old buddy Hannity anymore. He’s calling Tucker. So Tucker is also an informal advisor to the current president of the United States, thereby kind of making him heir apparent. At least at the moment, Tucker Carlson is a horrible human being. You know, he can talk about economic populism or being antiwar, all he wants. But the truth is this man married into tons of money, the Swanson, TV, dinner, family. He doesn’t have to worry about anything. He’s a lot like Donald Trump. He doesn’t remember what it’s like to have to struggle. He has been in the media for way too long, made too much money on his own, married into too much money. This is not an economic populace that is ever going to help out the average American, what he’s going to do. Just like Trump run on a platform of racism, say that all of your problems are because of the others, them, those people, whoever those people might be on that time. That’s what all your problems STEM from. And if you elect Tucker, he’ll cure them all. It doesn’t happen that way. Folks don’t fall for the lies and for the love of God, Republicans come up with something at least a little bit better than Tucker Carlson in 2024.